Elisabeth Warren Has a Plan for America First

I plan to vote for Warren in the primary and general election, but I am not thrilled by all aspects of her plan for economic patriotism. I also have doubts about medicare for all (good policy bad politics) and forgiving student debt (good politics bad policy).

Trying to be brief and actually get to the topic of this post, my problem with Medicare for All is that people fear change and, while a majority support a Medicare option, a minority supports just enrolling everyone in Medicare aotomatically. I am in that minority, but Medicare for All is bad politics and also will never actually be approved by the Senate. Student loan forgiveness is the opposite. Many people burdened by student debt will vote for a candidate who promises to forgive it. But they are not the people most in need. They are US college graduates and relatively wealthy (even if not as fortunate as older graduates who got degrees when tuition was much lower). I do support free (public) college. The difference is that not charging tuition encourages people to get bachelors degrees which reduces supply of people without bachelors degrees and increases their relative wages (see the huge accidental experiment of enrollment to avoid the draft during the Vietnam war and the dramatic decline in the college wage premium). Given to someone who has already made the decision does not have this effect. It is special interest politics with beneficiaries who know exactly who they are at the cost of other programs or lower taxes or who knows ? (well rich people know they will be hammered by Warren and will vote for her only if they are patriotic, but there aren’t many of them).

OK now the plan for economic patriotism. I am sure this is excellent politics. I support some of the proposals (more money for apprenticeships so not all of the subsidies for education go to fancy pants bachelor’s degrees). I object to some. I also disagree with some of the analysis (which is a critique of work by friends of mine and is provocative and very high quality for a candidates web site).

First the general focus is on helping US workers also against foreign workers. I know this is almost universally accepted as a goal, but I find myself in the tiny minority who are against that. The income of US blue collar workers is pretty high up the world income distribution. I reject nationalism and oppose the aspects of patriotism which overlap with nationalism. This is a question of values not analysis and I won’t type more about it.

Second, the web page argues that the problem for US manufacturing workers is trade not technology. This is actually engaging in the economics debate at a reasonably high level.

Others blame “automation” for American job losses, especially in manufacturing. It’s a good story — robots and other new technologies made American manufacturing workers more productive, so companies needed to hire far fewer actual human beings. A good story, except it’s not really true. Recent research finds this story is based on a widely-held misunderstanding of the data on American manufacturing output, and a statistical quirk about how productivity is measured in our computer industry. There is actually no “evidence that productivity caused manufacturing’s relative and absolute employment decline” in America since the 1980s. Meanwhile, Germany has nearly five times as many robots per worker as we do and has not lost jobs overall as a result.

Now that’s pretty good for a candidate’s policy shop. In fact it is an excellent one paragraph introduction to the debate. First it is definitely true that the rapid increase in measured productivity in manufacturing is concentrated in information technology and absolutely would have been missed without careful estimates of the quality of computers and such (which makes international comparisons misleading). On the other hand, it is generally possible to get the result one wants by slicing the data. It is generally true that productivity growth has not been fast except in the sectors where it has been fast. I have more trouble with the comparison with Germany. The proposal is that the US should do what Germany does. The problem is that not all countries can run trade surpluses (unless we discover new markets for our goods on, say, Mars). Germany is a strange case due to the Euro (I will *not* get started on that today). Excluding computers and comparing the Germany not, say, Italy is cherry picking twice. Very standard for a campaign document but I don’t like it. 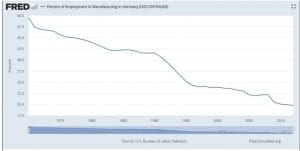 Over the same interval, the share declined from 26.4% to 10.3% in the USA. 10.3% is a lot less than 19.8% but the trends are similar. Of course, Germany was selected by the Warren campaign, because it has unusually high share of employment in manufacturing. Again, it is arithmetically impossible for all countries to run manufacturing trade surpluses as Germany does.

Third Warren says the US Federal Government shouldn’t give so much intellectual property away. She opposes the effective (massive) subsidy of venture capital (which is concentrated in two sectors information technology and biotechnology — that is making money off of DARPA and the NIH).

Taxpayers should be able to capture the upside of their research investments if they result in profitable enterprises. Like any investor, taxpayers should get a return on the risky investments they are making in R&D. That can take various forms. Taxpayers can: get an equity stake in any company that relies on intellectual property these investments create; retain royalties on publicly funded innovation or a golden-share of the patent revenue; or require the companies benefitting from publicly funded R&D to reinvest profits back into domestic production, R&D, and worker training programs, rather than into stock buybacks.

I support that subsidy. Like Warren, I am not a market fundamentalist. I have no problem with picking winners at the level of sectors. I don’t like the fact that venture capitalists get super rich off of publicly funded research, but the current system gets the job done and that’s important. Basically, I see more enforcement of intellectual property protections as a bad thing (they are needed to get for profit firms to invest in R&D but taxes work fine for DARPA and the very popular National Institutes of Health).

The proposal seems to me to require a lot of work by lawyers to define and apply the general rules. That is a social cost. Also one effect is that much of the work will be advising companies to have as little interaction as possible with DARPA and the NIH in order to avoid the trouble.

I’ve met the guy (Sam Broder an amazing guy with an amazing life story) who lead the team at the NIH which showed that AZT fights HIV, who was furious that Burroughs Welcome charged a huge price for a simple molecule which they didn’t invent with a huge benefit which they didn’t discover (without a lot of public sector help). As director of the National Cancer Institute, he made a rule that if NCI scientists were involved in the development of a drug, then they had to be involved in setting the price. This was a disaster. The main (almost only) result was a barrier to collaboration between NCI scientists and pharmaceutical companies.

I say that the best thing to do with publicly produced intellectual property is to just give it away.The DARPA + NIH budgets equal about 3 of Federal Spending. If the only return on that investment is the benefits to final users of the internet and effective treatment for HIV, that’s fine by me. Getting some of the profits for the Federal Government is not worth the hassle (which would be massive).