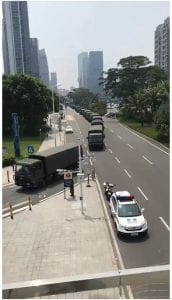 ” The long line of trucks is a traffic jam of military trucks. Shenzhen (China), to state the obvious, is across the border and located just north of Hong Kong (see map). This show of force could still be a well poised threat to Hong Kong warning them to discontinue their protests or else. Shenzhen is an approximate 20 miles from Hong Kong and can be traveled by rail, bus, or limo. 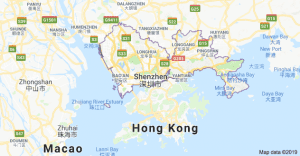 In an update, it appears the Chinese military have started military exercises in Shenzhen as well as hundreds of the People’s Armed Police (PAP) in preparation of an invasion. Another saber rattling action intent on intimidating Hong Kong protesters. This is an scalation from previous efforts when Traffic Police were the ones used to make a similar point. It remains to be seen if China is willing to break the “one – country, two governing systems model” allowed Hong Kong and at the heart of China’s delay in deploying. Hong Kong is a global economic hub. Any intrusion would be noticed, lead to a destabilization, and potential sanctions on China.

On a forced (German VP boss) business trip, I was scheduled to visit a PCB manufacturer in Shenzhen. The travel agency routed me through Shanghai instead of Hong Kong which added hours to my trip (1 hour sitting in Shanghai) as compared to an ~ hour coming out of Hong Kong. A train would have stopped near the Westin where I was staying.

It was obvious the company travel agency did not know the route or bother to look at a map. I arrived after midnight. I informed my Chinese associate, we would be meeting later in the morning so I could be rested enough to negotiate the return of the excess air freight costs charged and my own agenda of negotiating the freezing of gold prices for two years. I was successful in both cases. My boss saved face, I became a star, and my American Planning associates did mot suffer a boot in the pants for their deliberate laziness.

As you can see on the map going back and forth between Shenzhen and Hong Kong is easy to do for travelers and the military too.