Yes, Virginia, the government shutdown really did cause a mini-recession

Yes, Virginia, the government shutdown really did cause a mini-recession

For the past several months, I have been pounding on the idea that the government shutdown, during which 800,000 jobholders were temporarily laid off without pay, had a much bigger impact on the economy than was originally thought.

This morning we get the following graph from Bank of America Merrill Lynch, which speaks for itself: 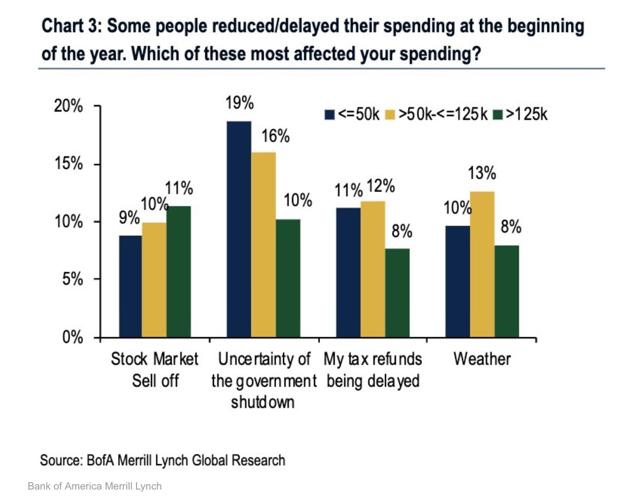 One of the most important insights from behavioral economics is that losses have an outsized effect on behavior compared to gains, usually on the order of 2 to 1. In the case of the government shutdown, about 0.5% of the workforce went without pay for about 45 days. Using the 2:1 ratio, that would translate into a -1% deadweight loss to the economy during that time.

Of course, the workers got back pay when the government reopened – but if the 2:1 ratio holds, there wouldn’t be an equivalent “kick” from renewed spending. Which seems to have been the case, since the March +1.3% rebound in real retail sales didn’t make up for the -1.6% decline in December.