Recently I’ve seen a bunch of takes to the effect that “the economy is doing great, and therefore it is likely that Donald Trump will be re-elected.” In my opinion that fear is overblown for three important reasons.

The first, least noteworthy reason, is that there is still a lot of time between now and the election. As I noted Monday, many – but not all – models of the economy indicate that a recession is likely between now and then, for reasons having nothing to do with the age of the expansion. Needless to say, a recession in 2020 would not bode well for either Trump or the GOP.

Secondly, consider what economic interventions Trump and the GOP have made since they inherited the economy from Obama. There have been three:

1. They passed a tax cut that lopsidedly favored the wealthy and corporations, that has generated zero acclaim from the middle and working classes – and with the decrease in tax refunds, may have generated net negative feelings.

3. Trump is held responsible for the government shutdown that resulted in a mini-recession.

In short, it’s not clear to say the least that the public at large would give Trump credit for an economy that he mainly inherited from Obama and as to which his known interventions have been received negatively.

Finally, and most notably, the example of the Bush vs. Gore 2000 election strongly cuts against Trump. As I wrote in 2016, all of the fundamentals-based election models, such as the “bread and peace” model, or models based on the unemployment rate or on consumer income and spending, indicated that Gore should have won by nearly a landslide, on the order of 55%-45%, as shown in the graph below: 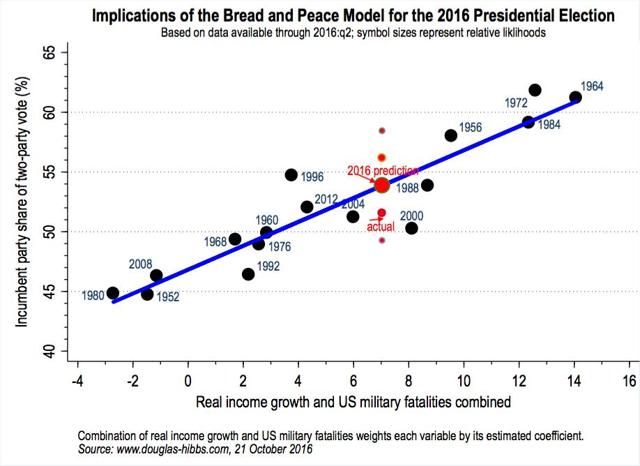 Instead, Gore won the popular vote by only 0.5%, despite being able to run on both peace and prosperity – the biggest outlier of the entire series going back to 1952.

Two big factors held Gore back: first, the economic expansion had gone on for nearly 10 years, and at some point the public takes it for granted, or in other words, “so what have you done for me lately?” Second, as his Vice President, Gore was stained by Bill Clinton’s slimy personal life.

Both of the factors that worked against Gore in 2000 are likely to work against Trump in 2020: if the economy remains in expansion, the public will probably take it for granted; and Trump’s pervasive sliminess, both public and private, will work against him. In short, Trump is likely to underperform compared with the fundamentals even more than did Gore.

While the example of 2016 certainly means that the 2020 election is another “all hands on deck” moment for Democrats, and nothing should be taken for granted, even if the economy remains in expansion as it is now I do not think that means Trump wins the election.