Wages continued to improve through January

Wages continued to improve through January

One item I didn’t get around to in the last couple of weeks is how wages performed as of January’s jobs report. And the basic answer is: pretty good!

As of January they were up +1.9%. This is the best showing except for a few months in 2015.
As Jared Bernstein has shown, the “real” gains in wages have a lot to do with the price of gas (blue in the graph below). But in the last two months they have risen the most in the last 8 years in real terms ex-energy: 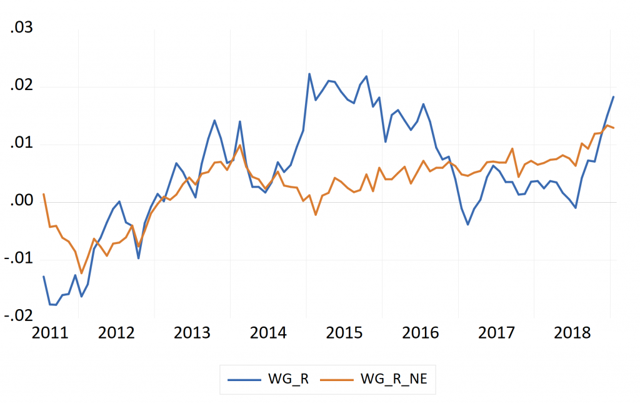 So average workers are finally making some real headway.

By the way, this also shows up in the Q4 2018 Employment Cost Index that was released three weeks ago:

Returning to real inflation adjusted average wages, they improved again and are now only 3% below their 1973 peak:

Finally, total wage growth for non-managerial workers since the bottom in October 2009 is now up +28.5%:

Total wage growth from this entire expansion has only been exceeded by the 1960s and 1990s expansion. The bad news, of course, is that it took 9 years to get here.