The Empty Quarter, Greenwich and the Mason Dixon Line

The Empty Quarter, Greenwich and the Mason Dixon Line

I recall being surprised to learn that I was born, bred and then living South of the Mason Dixon line. I considered the border between North and South to be the Patomac river (honestly felt I was entering enemy territory when I entered Northern Virginia — this was very long ago). My dad explained it was the border between Pennsylvania (North) and Maryland (South). My 91 year old mother recently confessed that she had some doubts about moving South of the Mason Dixon line to live with my Dad. The border is now roughly where 270 shrinks into a normal sized highway. The line is arbitrary.I thought of it when I saw the very common figure showing the empty quadrant of US public opinion. A solid majority is more egalitarian than the center and more socially conservative than the center. 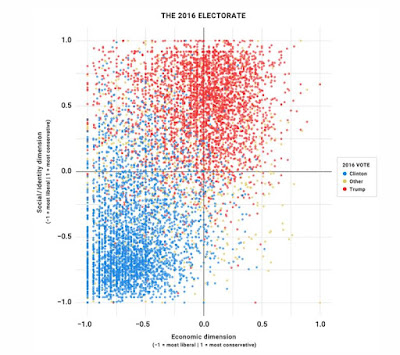 What the hell is this center ? The question is made more difficult by the fact that the two dimensions are indices constructed combining answers to many questions. I am fairly sure that historically the “economic dimension” is the first principle component of the cloud of answers and the “social/identity dimension” is the second. But I am talking about the placement of the axes. It is that arbitrary, unmotivated and unexplained choice which causes the South East quadrant to be empty. One natural placement is that the division between left and right on the economic dimension is the median level of the economic index and the division between socially conservative and socially liberal is the median level of social/identity index. This is clearly not the choice made by *all* political scientists, sociologist and survey researchers. It is clear that the median US adult has left of center views on economic issues and more conservative than centrist views on social/identity issues.

I assert that there is some elitist nonsense going on here. I haven’t looked very hard, but I also haven’t found any definition of what makes some point (0,0). So I speculate.

Of course it isn’t simply a matter of eliminating a central claim of US political science by adding a constant to the economic index scores and subtracting one from the social/identity index scores. The cloud would look strange because it would end abruptly at the values which are now econmic ultraleft -1 and ultra social conservative +1. The issue isn’t just the processing of the answers to questions which are the raw data — it is also the questions. A large number of people (including some Trump voters) give the left more answer to every economic question and a smaller but still large number give the most conservative answer to every social/identity question. This shows the elite libertarianish skew of the people who chose the questions.

If the economic question is “should the rich be lined up and shot after all their wealth is confiscated or is making them poor punishment enough” then almost all US adults would agree on something with a libertarian. If the social/identity question is “was Moses right that gay sex should be punished with death” again a substantial majority would side with libertarians. But those questions are considered absurd, because they are outside of the range of elite opinion. (indeed as a child of the elite I absolutely oppose killing rich people, killing gay people and oppose killing rich gay people). The point is just that the questions matter. Most of the 10% most egalitarian Americans are to the right of Mao Tse Tung. The most socially conservative are to the left of Cotton Mather (haven’t heard much agitation for witch trials lately).

So what is this elite ? My guess is that it would be political scientists, sociologists, and survey researchers. But it could be members of congress. I haven’t read the questions, but they might be issues on the Federal Government agenda — nothing so far left as a top income tax rate of 70% until roughly last week. Or it could be pundits, columnists, “sophisters, economists, and calculators”. In any case, the figure tells us as much about the people who chose the questions as about those who chose the answers. !”