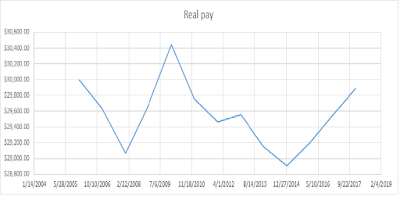 Donald Trump lies about everything including military pay:

Trump Brags To Troops About A Fictional Giant Pay Raise He Got Them – The president told military personnel in Iraq that they’ll get a raise of over 10 percent, their first in a decade. But it’s 2.6 percent, and they get a hike every year.

Dave Jamieson even notes that Bill Kristol has called out Trump on this whopper. But to me this is not the story. The real story is that Trump thinks our troops are stupid. As I read this sad account, I thought of a classic paper by Robert Lucas on the role of monetary policy in the New Classical model. Lucas postulated several island economies each with one individual who observes his own wage but not the general price level. Business cycles were generated by unexpected changes in the money supply which drives up everyone’s wages but people have yet to catch on to the fact that the general price index had also increased. I always found this an odd way of explaining persistent changes in output since most people shop at least on a weekly basis. But maybe the soldiers during the Vietnam War did not know their at home spouse and kids were facing higher grocery prices. But with the internet and advance telecommunications, this story is not tenable today even for our soldiers overseas. Dave links to this informative source:

Annual military pay raises are linked to the increase in private sector wages, as measured by the Employment Cost Index (ECI). In the 1990’s, the annual military pay raise was capped at one-half percent below private-sector growth unless specifically granted a larger increase by Congress. The FY2000 National Defense Authorization Act directed that pay raises for 2000 through 2006 would automatically be one-half percent above the private-sector wage increases. Pay raises beginning in 2007 are equal to the increase in the ECI. Pay raises may exceed these automatic levels if authorized and funded by Congress.