Gerrymandering is not going away any time soon. It will just be used in different manner, a manner in which to achieve congressional districts with a fairer representation of the district’s constituency. 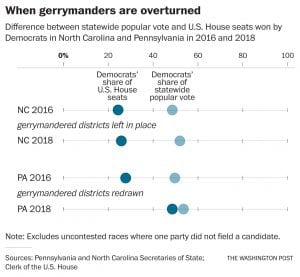 The Washington Post has an article up on the impact of both unfair gerrymandering and a fairer version of gerrymandering as dictated by the court The later achieves a much fairer split of the districts meant to represent the makeup of the population within the state and their political interests as discovered through national elections.” One state fixed its gerrymandered districts, the other did not.“

The picture depicts the change in numbers of Republicans and Democrats elected to office as determined by the Congressional districts make up. Pennsylvania had its districts redrawn by the court and “a 53 percent majority in the popular vote yielded a hair under half of the contested seats for Democrats — a big difference from 2016, when 48 percent of the vote gave Democrats 27 percent of the seats.”

In North Carolina, the districts were not redrawn. “The old maps were still in place and a electoral result in 2018 was identical to that of 2016. Despite a Democratic wave in which more than half the state’s voters opted for a Democratic House candidate, Democrats won one-quarter of the contested seats.”

Michigan passed Proposal 2 which established a civilian board to redraw the boundaries of the Congressional districts. I suspect it will still have issues as it will be selected by the legislature.