I made a mistake. And it’s a good thing.

Following up on my Running on Empty post, I wanted to give a more finely-grained analysis of climate costs relative to GDP growth, so I returned to my sources to see who their sources were and how they did their calculations. Watson et al., compiled their estimate from National Centers for Environmental Information, “U.S. Billion Dollar Weather and Climate Disasters” and Paulina Jaramillo and Nicholas Muller, “Air pollution emissions and damages from energy production in the U.S. 2002-2011.”

Jacobson, Delucchi et al. presented their estimates in two tables, broken down by country. I had taken what I thought was 15% of their global climate cost estimate but it turns out that my number was roughly double theirs. I may have taken their high estimate instead of the mean. Anyway their actual estimate was around $4 trillion in 2013 dollars. But that is not the mistake I am concerned with here.

The mistake came to light after I had all the carefully checked numbers, recalculated in 2012 dollars and I compared annual GDP growth to annual health and climate costs. Climate costs exceeded growth in 13 of the 28 years from 1990 to 2017. Over the entire period those costs offset 95% of reported real GDP growth. Or so the numbers claimed.

Then I tried a different tack. I subtracted estimated annual climate costs from GDP and then calculated annual growth. To my surprise the resulting annual growth was only somewhat lower. O.K., I thought, I’m starting from a much lower total in the base year and the year-to-year number reflects only the the annual increase in climate costs and not the annual cost. 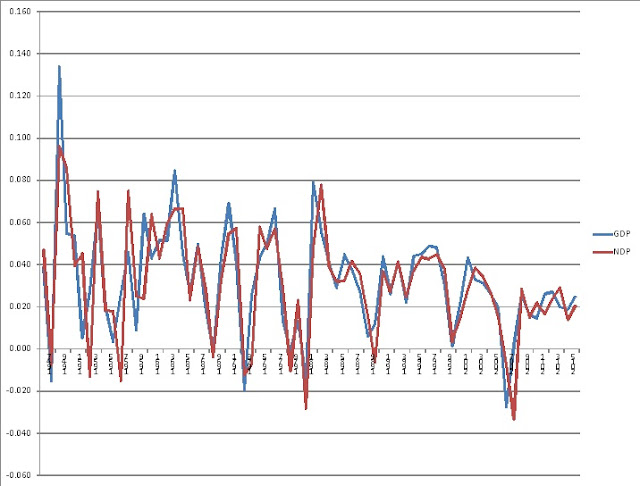 Meanwhile, look at what has happened to depreciation. It has nearly doubled as a percentage of GDP, from around 9% in the late 1940s to almost 17% in recent years. 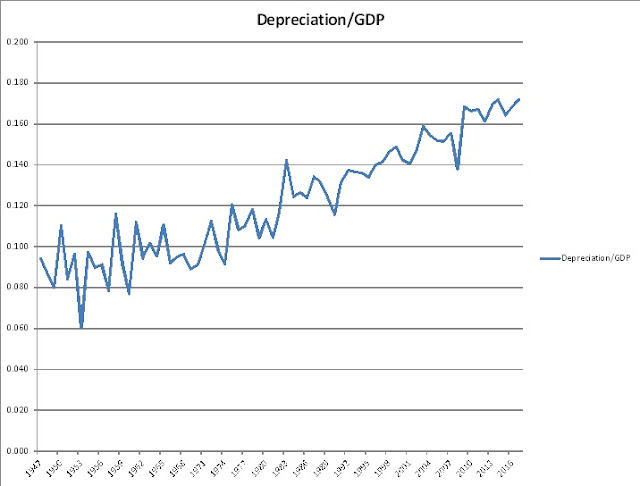 Something that doesn’t show up too well in the graph above is that most of the growth in depreciation relative to GDP has occurred in the last 48 years. So, doubling every half century we could have an economy in 125 years that runs entirely on depreciation! But that would be O.K. because GDP would be so much BIGGER then. Isn’t that right, Professor Nordhaus? Professor Solow? Professor Krugman?

I don’t have the solution to this computational problem, other than to point out that it is the inevitable consequence of a poorly-conceived metaphor for the “measurement” of heterogeneous good and services. The monetary yardstick is made of a highly elastic material and correction for changes in the cost of a basket of consumer goods (CPI) does not begin to address the real issue. GDP and GDP growth has become the increasingly opaque lens through which we view society and “the economy.” It is a cracked, scratched, smudged, distorting lens that may not even enable us to tell whether what we view through it is upside up or upside down.