An”invisible hand” reaches up out of the subterranean depths of that “whole capital” periodically to re-establish the “certain proportion,” which lies somewhere between 20 and 25 percent. The average from 1948 to the end of 2017 was 22.43434%. It looks rather like this: 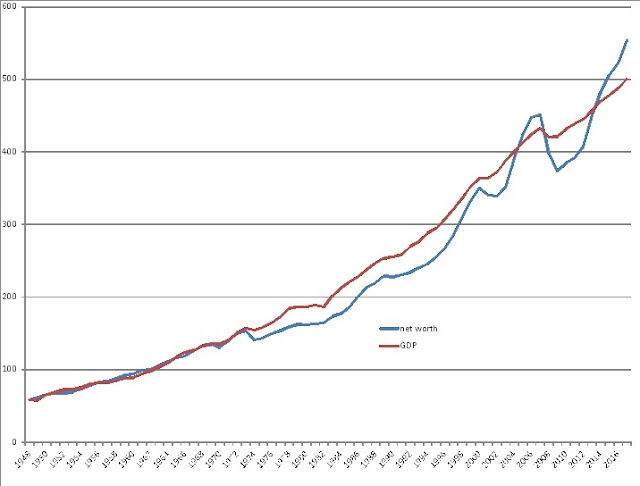 Household and non-profit net worth and GDP track each other quite nicely from 1948 to 1973 until “something happens” in 1973. (What could that “B”?!) After 1973, net worth underperforms GDP until sometime in the late 1990s when a series of wild gyrations commences. As you can see from the chart, though, the authorities have the situation well in hand and nothing could possibly go wrong.

Henry Hoyt in 1886 and Leo Amery in 1908 chided Smith’s “fallacy” of “terminological inexactitude” and the consequence of ignoring the fact that the capital of a nation, “grows by the exercise of the qualities and energies of which it consists.” Well, yes, but to some extent those qualities and energies are bound up in the possession of assets whose market values at any particular time can be aggregated. The amount of work to be done is not fixed but it is bounded. Hoyt and Amery had a point — but so did Smith.

It seems to me that my little chart above tells a story of how those bounds might even be stretched a bit — presumably by the expedients of easy credit, fiscal deficits and financial deregulation. But there seems to be inevitable leakage from stimulation to speculation and from speculation to Ponzi finance, as Minsky warned. From 1948 to 2016, the CPI-adjusted net worth of households and non-profits never exceeded five times real GDP (or GDP never less than 20% of Net Worth). At the end of the second quarter of 2018, GDP was 18.7% of Net Worth.