The Nastiest Motives of Nasty People

“Economists are active militants against the concept of the lump of labor, that is, the popular idea that the total number of jobs or of working hours is fixed (Walker, 2007).”

The quote is the first line from a 2017 paper by Tito Boeri, et al. It gives me confidence that at least some of the time my message is getting through.

The image below is from a 2018 report published by the Roosevelt Institute. It tells me there is still a huge amount of work to be done teaching people about the ideological deceptions of the so-called lump-of-labor fallacy. 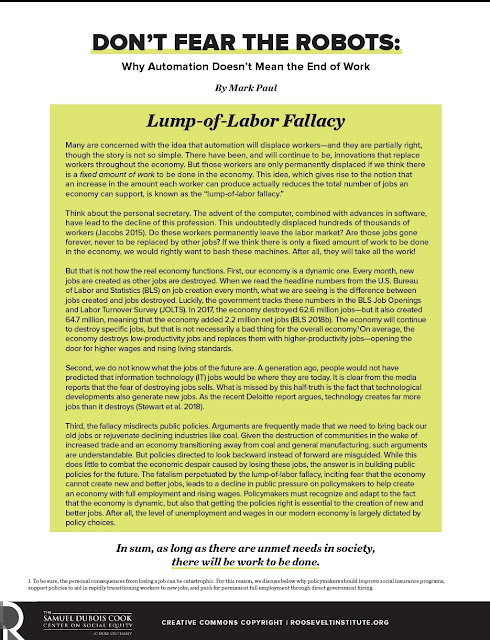 At times, over the last 20 years or so – never mind how long precisely — I have felt like Captain Ahab in pursuit of the whale as I have wrestled with the so-called “lump-of-labor fallacy.” Having finally sized the beast up, I am convinced that the fallacy claim is little more than a “pasteboard mask” behind which, “some unknown but still reasoning thing puts forth the mouldings of its features.” That hitherto unknown thing is a theodicy, or, perhaps it would be more accurate to call it theo-dicey in recognition of its treachery.

A theodicy is “an attempt to reconcile the goodness and justice of God with the existence of evil,” Jonathan Cook explained in Inscrutable Malice: Theodicy, Eschatology, and the Biblical Sources of Moby-Dick. In the case of the fallacy claim, it is not the goodness and justice of God, per se, that is at stake but the rationality and benignity of the capitalist system, the “invisible hand” that supposedly impels narrowly self-interested actions to promote the general good of society and the tendency toward equilibrium by means of which prices and quantities of trade “find their own level.”

“The great merit of the capitalist system, it has been said, is that it succeeds in using the nastiest motives of nasty people for the ultimate benefit of society.” To seek to intervene wantonly in such a divinely-ordained contrivance is thus to exhibit an unseemly absence of faith. Austin Robinson’s sarcastic remark, quoted above, is usually mangled and mis-attributed to John Maynard Keynes, who, to be sure, did indeed comment (half-jokingly?) on the need to “pretend to ourselves and to everyone that fair is foul and foul is fair; for foul is useful and fair is not” and who saw avaricious money-making as a “comparatively harmless channel” for “dangerous human proclivities” that might otherwise “find their outlet in cruelty, the reckless pursuit of personal power and authority” — as if the two pursuits were mutually exclusive rather than complementary. But we haven’t even gotten to that alliterative “paradox of poverty in the midst of plenty” yet.

The lump-of-labor fallacy’s alleged — albeit unsubstantiated — assumption of a “fixed amount of work to be done” rewords a staple of 19th century classical political economy, the “certain quantity of work to be done” determined by the number of workers who could be profitably set in motion by a previously-accumulated capital consisting of subsistence goods – a “wages fund.” Who did or didn’t say “a certain quantity of work” or “a fixed amount of work” is the key evidence for or against the fallacy claim and, consequently, the theodicy claim.

The “certain quantity of work” also happens to be symptomatic of the adaptation from religious to secular theodicy. Classical political economists didn’t invent a static universe. They inherited it from the same natural law enlightenment of the old Great Chain of Being as their Panglossian optimism. Montaigne’s proposition that “one man’s gain is another’s loss,” and Machiavelli’s notion of a “fixed quantity of happiness” in the world at any one time are notable specimens, as was Francis Bacon’s observation that “the increase of any estate must be upon the foreigner (for whatsoever is somewhere gotten, is somewhere lost)…”

Originally overt and unabashed in the wages-fund doctrine of 19th century vulgar political economy, the static premise has had to go incognito in modern academic economics, masked behind simplifying assumptions, methodological conventions, ceteris paribus, dead metaphors, unexamined analogies and reams of “math.” Unlike theodicy proper, the political economy dispensation didn’t set out to make suffering bearable for the sufferers, but only to yield, all too lustfully, to a temptation whose role as “a component of the self-consciousness of European humanity” must never be underestimated.

Misattributions are commonplace. Often it is simply the assignment of a saying to a historical celebrity because, “who ever heard of Austin Robinson?” Mark Twain, Abe Lincoln, Gandhi, Stalin and Winston Churchill are said to have said many a saying they never said.

Sometimes, though, the intention is to put incriminating words in the mouth of a bogeyman or to burnish an obscure opinion by attributing it to some illustrious personage. In the case of the lump-of-labor fallacy, the false attribution of a fallacious belief to the economically-naïve workers or trade unionists is a disavowal and projection of the economists’ own unacknowledged — possibly subliminal — convictions about the inherent rationality and benevolence of the market-deity who cunningly enlists “the nastiest motives of nasty people for the ultimate benefit of society [except, of course, for that obligatory residual of ‘poverty in the midst of plenty’].”

The temptations of theodicy are formidable. Neither was Marx exempt, with his “dialectical” projection of a revolutionary proletariat, forged in abjection and class struggle. Even the truth, as Ernest Tuveson remarked in a review of Melville’s The Confidence Man, “is no guaranty of either happiness or freedom.” But what we can do is to expose and repudiate the facile satisfactions of the economic pseudo-theodicy we know and to re-evaluate those perspectives that the econo-theodicean orthodoxy has condemned or discounted.

To recap: in the manuscript, A Certain Quantity of Work to Be Done, I develop the following theses:

According to James McCleary in 1912, there was an “oft-repeated error” behind statements from union leaders made to the congressional committee on labor, which he sat on. “It was rarely if ever put into words, but it was the unspoken major premise of many an attempted syllogism, the unstated basis of many an appeal.” A half century later, steel industry executive William Caples stated that the alleged error was “one of the most tenaciously held and generally least articulated of trade union beliefs…

I have researched the lump-of-labour fallacy and its surrogates, and would have to concur with McCleary and Caples about the lack of articulation of a belief that is presumably so widespread. I wonder if you can help me out here? Can you cite statements from advocates of work-sharing, for example, that clearly demonstrate a belief in a “fixed amount of work”? And, no, that wouldn’t include statements advocating a certain policy that you infer “implies” such a belief.

In “A Certain Quantity of Work to Be Done” I cite half a dozen examples of orthodox political economists stating precisely that phrase or a close approximation of it as an empirical premise — and not a hypothetical one. Can you find just one from the labor side?