In case you thought I was talking through my hat about the general lack of affordability of all types of housing, including both owning and renting, the Pew Charitable Trust has also stepped up with a nearly identical analysis.  Go read the whole thing, but here are a few especially noteworthy excerpts:

[A]ccording to the Harvard Joint Center for Housing Studies[, d]emand for rental properties has increased across age and socio-economic groups since 2008….

In the aftermath of the 2007-09 downturn, [… m]any families struggle to save enough for a down payment or lack a sufficiently strong credit profile to meet the stringent underwriting standards that were put in place in the wake of the crisis. But some renters—even with down payment assistance programs— simply cannot afford the monthly payments for homes that in many areas are commanding prices near those of the 2007 market peak

…. The steadily rising demand for rental properties over the past decade has reduced vacancy rates to near historic lows, fueling a rapid increase in rental market prices that has outpaced household incomes for many families. This imbalance is contributing to high rates of “rent burden” ….  In 2015, 38 percent of all “renter households” were rent burdened, an increase of about 19 percent from 2001.

It’s clear that the very high, and in some cases record cost of new housing has played an important role in the surge of households who rent. Here’s my most recent graph comparing median housing costs with median household income (h/t Political Calculations): 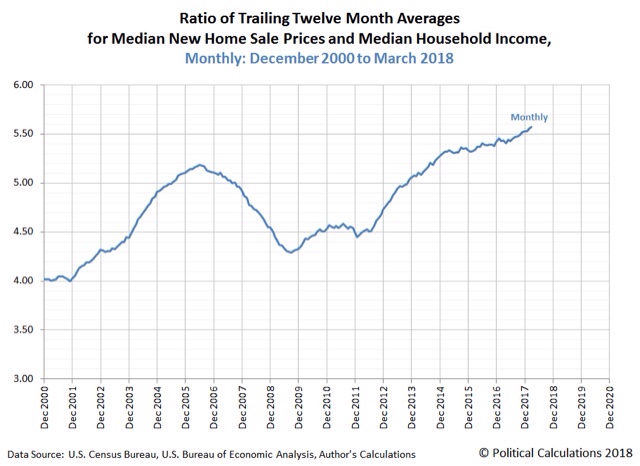 That high cost of housing is one driving force behind the surge in rentership:

….[A] 2016 Pew Research Center survey found that 72 percent of renters said they want to buy a home at some point, and most cited financial reasons when asked why they rent. Another recent public opinion poll asked renters ages 18-34 why they were not buying homes, and 57 percent said they could not obtain a mortgage. On the other hand, a recent survey of Americans over 55 found that 71 percent of those who plan to move again said they intended to rent rather than buy.  Most renters over 55 cited cost as a driver of their decision and said it makes the most sense for people their age to rent.

In summary, Pew found that

the increased demand for rental properties and their limited supply, along with the lingering effects of foreclosures, demographic changes, and a decline in the rate of renters transitioning to owning, have led to higher rents. 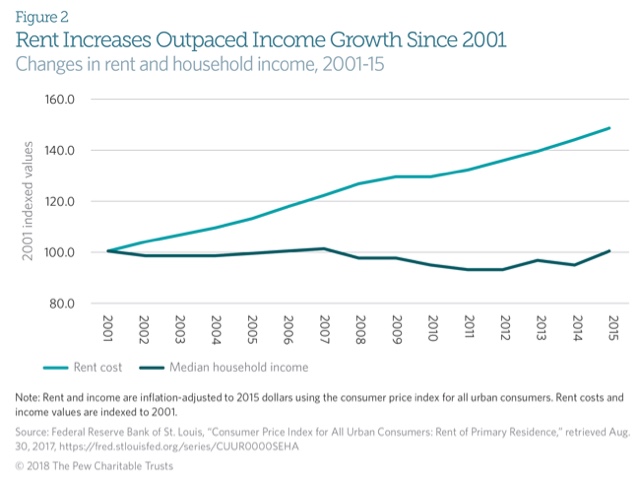 This is nearly an identical graph to the one I have posted several times, except that it uses the CPI for rents as opposed to the American Community Survey’s “median asking rent” metric, in comparison with median household income.

One significant new piece of information that I hadn’t considered is the change in demographic profile among renters.  They note:

…. In 2015, nearly 43 million American households lived in rental housing, an increase of 9.3 million since 2004 and the largest rise since 1970…. However, unlike the early 1970s when young families drove the increase in renting, the 2015 spike is largely propelled by those 55 and older, largely baby boomers, who are responsible for a 4.3 million jump in the number of renters since 2005.

It seems that Boomers haven’t quite finished being “the bulge in the belly of the python” as they compete with the equally large Millennial generation for the scarce resource of apartment housing.

The bottom line here is that incomes simply have not kept up with the costs of all sorts of housing, for both owners and renters. The best way to resolve this problem would be for much more multi-unit housing to be built. Why it isn’t being built is something I have not seen authoritatively addressed. Some, like Matt Yglesias, think it’s all about zoning. There is also the issue of whether building costs are too high for units aimed at lower income dwellers.  Part of the issue may also be an increasing oligopolies of local builders.

Whatever the cause may be, it is a real problem, and interest rate hikes by the Fed, which make mortgages more expensive, are severely counter-productive.