Both industrial production and retail sales for July were reported this morning. Let’s take a look at both.

First, industrial production increased m/m to another all time high (gray in the graph below), as did manufacturing (red): 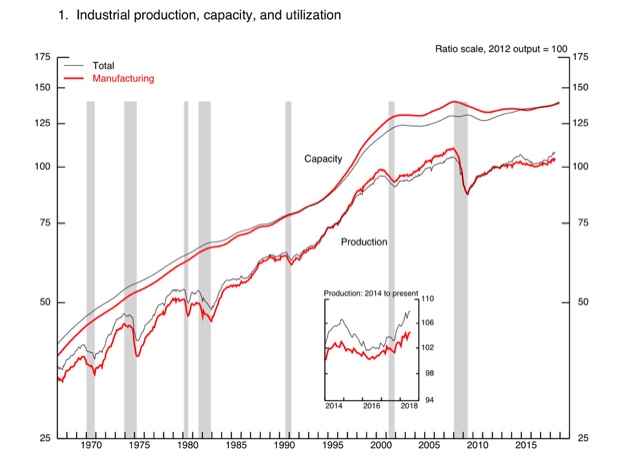 At the same time, if you zoom in on the inset, you can see that manufacturing growth has slowed down somewhat this year.  It is only up +0.8% in the last 5 months, after having risen 2% in the 6 previous months.

There has been some evidence in both the regional Fed reports and the ISM manufacturing index of a little cooling — from white hot to red hot — in manufacturing activity in the past few months. This report is of a piece with that cooling. Tomorrow both the Empire State and Philadelphia Fed regional manufacturing reports will be released, and may (or may not!) give evidence of further cooling this month.

Second, retail sales increased a strong +0.5% in July, but only after a -0.3% downward revision to June. Adjusting for inflation, real retail sales continue to grow on trend:

I expect per capita real retail sales to turn about a year before any downturn in the economy as a whole.

Since real retail sales are also a good short leading indicator for employment (red in the graph below), here is growth in both measured YoY:

This suggests continued strong employment growth in the next few months. One thing to watch for is what happens when last September’s outsized +1.3% monthly increase drops out of the YoY calculations two months from now.

But the nowcast as indicated by the two reports is continued good growth in both production and consumption.