Now that we have both the Case Shiller and FHFA house price reports for June, let’s take a look at how they fit in to the overall market, and in particular on housing affordability.

To begin with, let me repeat the general formula for the housing market:

On a YoY% basis, the index rose 6.2% (blue in the graph below). This continues a slight deceleration from the YoY% peak of 6.7% in March.  Let’s compare that with YoY% growth in the least volatile measure of sales, single family permits (red, quarterly to cut down on noise) divided by 2 for scale), and the quarterly FHFA house price index (green):

On this graph it is easy to see how permits lead prices, although it is less apparent over the past few years.

So let’s zoom in on the last few years, measured monthly:

Now it is easy to see that YoY prices as measured by the Case Shiller index did decelerate slightly in 2016, although the FHFA index didn’t, coincident with the sharp deceleration in permits. The YoY change in single family permits peaked in the first six months of 2017, while both house price indexes continued to accelerate YoY into February and March of this year. While permits have decelerated significantly in the past year, prices have only started to decelerate in the last 4 months.

As a result of the continued surge in house prices, affordability continues to suffer. Contrasted with the  6%+ rise in house prices in the last 12 months, Sentier Research also reported today that nominal median household income only rose 2.6% YoY through July. 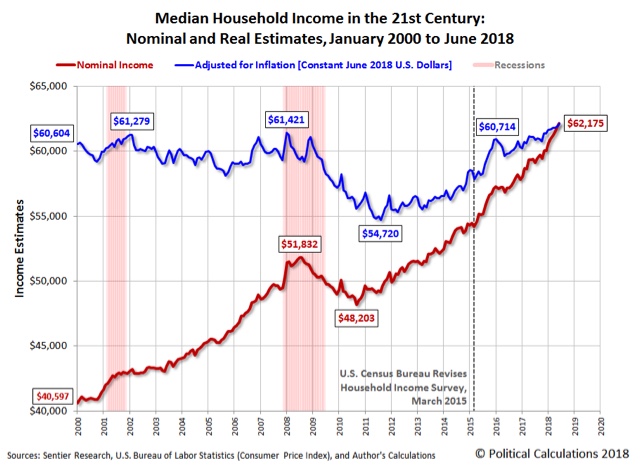 Since we can expect house prices to continue to rise for awhile, unless mortgage rates decline, the increased unaffordability of housing means that we can expect further pressure on house sales, which as I reported last week, on balance have begun to turn negative.