Four years ago HUD warned of “the worst rental affordability crisis ever,” citing statistics that

This is a serious real-world issue. I have been tracking rental vacancies, construction, and rents ever since.  The Q2 2018 report on vacancies and rents was released a few weeks ago, so let’s take an updated look. In this post I will look at four measures:

As we will see, regardless of which measure used, rent increases continue to outpace worker’s wage growth, meaning the situation is getting worse. Most likely this is a result of increased unaffordability in the housing market, driving potential home buyers to become or remain renters instead.

In the second quarter of last year, median asking rents zoomed up over 5% from $864 to $910. In the two quarters since, they have remained at that level:

Here is an updated look at real, inflation adjusted median asking rents. The entires prior to 2009 show the interim high and low values from the previous 20 years. Since 2009, real rents have almost continuously soared — and reached yet another record high in the quarter just ended:

The big increase in unaffordability is unfortunately of a piece with the rental vacancy rate which, after appearing to have bottomed in 2016, tightened again in this report: 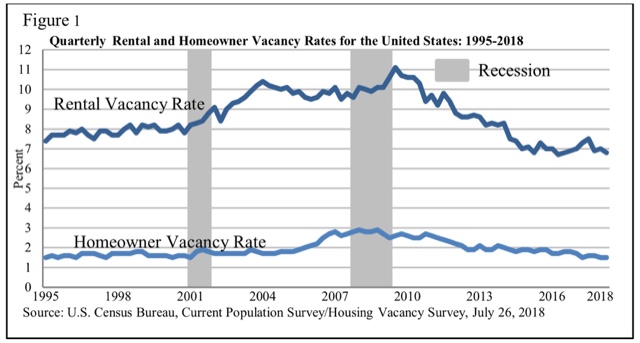 The monhtly CPI report also includes two measures of inflation in rents. The CPI for actual rent (blue) continued an apparent slow deceleration, while owner’s equivalent rent (red), the major component of inflation, remains near the highest levels in a decade, at over 3% YoY:

Yet another metric is HUD’s  Rental Affordability Index which, similarly to my chart above, compares median renter income with median asking rent. In its  most recent (Q1) uupdate, it, like the median household income data, shows both rents and renters’ income bottoming out in 2011-12, but with rents outpacing income ever since: 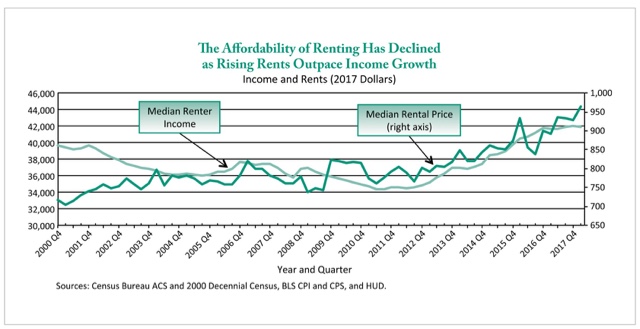 As a result, the trend in “rental affordability index,” according to HUD, which had been easing since 2011, has declined in the past year to matchits worst levels:
.

Note that HUD’s measure of housing affordability also generally deteriorated in 2017, making home-buying the least affordable since 2008, although better than  during the bubble years.
But the strong suggestion is that, as housing has become less and less affordable, more households are forced into renting, which has responded by *also* becoming less affordable.

[Paranthetically, I’m not sold on HUD’s method, mainly because it relies upon annual data released with a lag. In other words, the entire last year plus is calculated via extrapolation.]

Finally, there is a monthly rental index calculated by Rent Cafe.  This has the benefit of being much more timely.  Since it is not seasonally adjusted, the index must be compared YoY. While Zumper only includes 12 months of data in their monthly releases, at the beginning of this year they did publish the historical YoY record of their index (blue in the graph below). Rent Cafe’s measure of rent shows that a surge to over 5% increases YoY occurred in 2015 and early 2016, and has abated to less than 4% YoY since, in contrast to the CPI measures and also to HUD’s and the Census Bureau’s data: 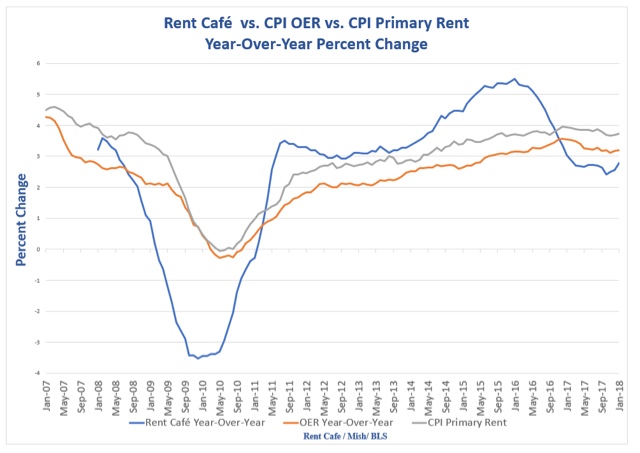 Through 2017, their measure of rents was continuing to grow at about 3% YoY. Below are the last 12 months through July: 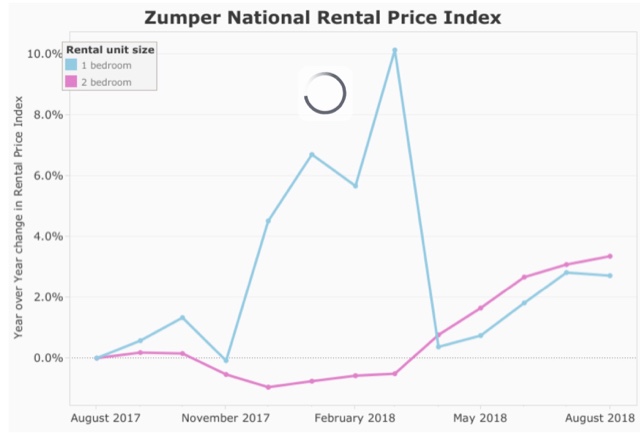 Here’s the bottom line, from all 4 sources: regardless of which measure we use, rents are growing faster than nominal wages for nonmangerial workers,which have onl increased at 2.7% YoY through last month.

In particular, this quarter’s Census report not only indicates no relief from the “rental affordability crisis,” it, like all the other metrics, shows that it is becoming worse, as — most likely — more and more households are being shut out of the home-buying market due to 5%+ YoY increases in house prices and increased interest rates, and are forced to compete for apartments instead.