– by New Deal democrat
This is a graph I’ve been meaning to comment on, that I saw on Vox.com a couple of weeks ago. It breaks down Obama voters from 2012 based on who they voted for in 2016, and adds in Romney voters who voted for Clinton in 2016: 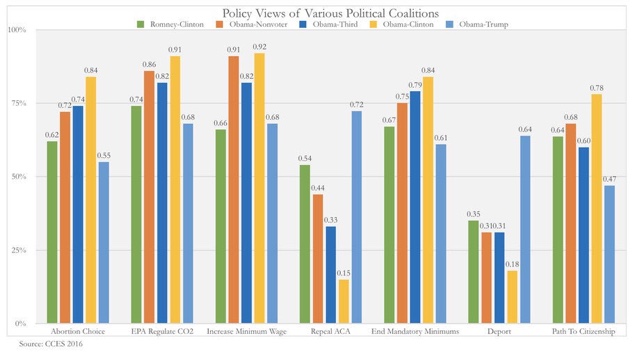 As an aside, note that the graphs measure opinions per group, and definitely *not* their number. Also, it’s hardly a complete snapshot of voters, since it doesn’t include all the others who voted for Trump. More on that below. But I wanted to make a couple of comments.
First of all, the Obama voters who  then voted for Clinton, a third party candidate, or just stayed home all had a pretty similar worldview with the exception of Obamacare. The disaffected voters who abandoned Clinton almost certainly did so because of their views of the candidate, not their views of the issues. For them, Clinton was a warmonger, or a corporate shill, or a crook (because didn’t Comey almost directly say so?), or had some other personal shortcoming.
By contrast, the Romney-Clinton voters were closer to the Obama-Trump voters than to the Obama-Clinton voters on everything except for xenophobia (the two issues furthest to the right on the graph).  In short, Romney-Clinton voters were garden variety GOPers who simply could not stomach Trump personally — i.e., the “never Trump-ers.” If Trump is the GOP nominee in 2020, at least some of them will refuse to vote for him again.
Here’s where it’s a shame that the bar graphs don’t include Romney-Trump voters. Because it would be nice to compare them with Obama-Trump voters. My sense is that Obama-Trump voters had a strong positive reaction to Trump’s populism while either not being offended by, or at least not taking seriously, Trump’s xenophobia and racism.
The former Obama-Trump voters are the ideological descendants of the old Dixiecrats: nativist-populists who believe in government programs, so long as those programs benefit *them,* and not ethnic or racial “others.”  They probably only voted for Obama because the economy was so bad in 2008, and had improved (just barely enough) in 2012.
The latter considered Trump’s racist campaign comments as “part of the show.” (I read an article about a union official from northeastern Pennsylvania who attended several Trump rallies with his buddies to find out why they were so attracted to him. The “part of the show” line was a direct quote. I wish I had saved the link to the article. Sorry!)
Here’s the bottom line I see: if in 2020 the Democrats nominate a reasonably “safe” candidate, the Obama-third party and Obama-nonvoter voters are probably coming back. Depending on the state of the economy, so are some of those who didn’t take Trump’s racism seriously. (Yes, his racism wasn’t a dealbreaker, but imo this group are reachable with reason).
Unless the economy in 2020 is as bad as it was in late 2008, the Dixiecrats are gone, and I see no reason to try to accommodate them.
Comments (6) | Digg Facebook Twitter |
6 Comments