The March JOLTS report this morning is powerful further evidence that raising wages (or training new workers) has become a taboo.

Just about everyone thinks that, faced with a worker shortage, “rational” employers will offer higher wages to fill the empty skilled positions. This in turn will draw more marginal potential workers into open unskilled positions.

What is really happening — as so breathtakingly shown this morning — is that by and large employers will refuse to raise wages, and then complain about their unfilled job openings.

As Exhibit “A,” I give you job openings (blue) vs. actual hires (red) in this morning’s report:

As a refresher, unlike the jobs report, which tabulates the net gain or loss of hiring over firing, the JOLTS report breaks the labor market down into openings, hirings, firings, quits, and total separations.
Not only has hiring been flat for the last 10 months, but it was higher than today’s level in November 2015, January 2016, and January 2017. Meanwhile job openings have skyrocketed by 20% since January 2017, and 25% since the end of 2015!This can only be considered a “skills mismatch” for the wages you want to pay, and if you refuse to train workers without existing matching skills.

Incidentally, Paul Krugman may be ready to embrace the idea of a taboo against raising wages, although for now he is plumping for the “employers are afraid of getting stuck with a highly paid workforce when the next recession comes” hypothesis. The problem with that particular hypothesis, though, is that such skittish employers — a lot of them anyway — won’t bother to post new job openings, since they know they would need to raise wages to fill them. The big spike in openings in this morning’s report suggests instead that employers are refusing to get the message.

Turning to other noteworthy items in the report, as a general rule, historically hiring leads firing.  While the one big shortcoming of this report is that it has only covered one full business cycle, during that time hires have peaked and troughed before separations. This is manifest when we compare hiring (red) and total separations (blue) on a quarterly basis as it existed through the end of the third quarter of 2017: 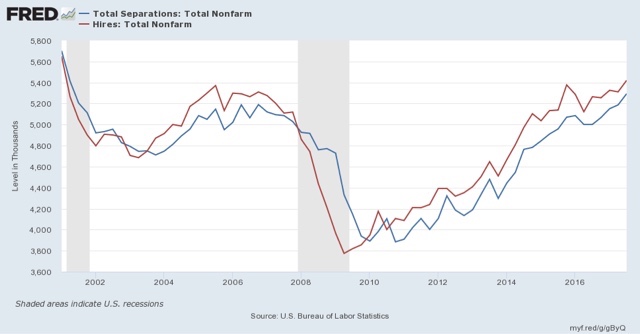 Here is the monthly data through this morning’s report for the last several years:

The updated graph shows hiring last making a peak in October 2017.  Meanwhile separations actually peaked before then, in July of last year, with a clear downtrend since, another significant revision since last month. *if* both have made their expansion highs, needless to say that would be important.
Further, in the previous cycle, after hires stagnated, shortly thereafter involuntary separations began to rise, even as quits continued to rise for a short period of time as well:

[Note: above graph show quarterly data to smooth out noise]Here are voluntary quits vs. layoffs and discharges on a monthly basis for the last 2 years:

If hiring and total separations have indeed peaked for this cycle, based on the last cycle I would expect quits to continue to improve for a short while — and they have — before also beginning to decline. As a counterpoint to that, separations have approached their bottom, a very good sign.

And indeed, I don’t even see a yellow flag until hires and separations go negative YoY, as they did before well before the last recession, which they haven’t yet:

Two months from now when the YoY comparisons get much harder, if we haven’t established any new highs in hires and total separations, and they are at or below zero — which is a real possibility — then we may have confirmation of a late-cycle trend.