The consumer edges closer to the precipice

The consumer edges closer to the precipice

In addition to my “long leading/short leading” model adapted from the work of Profs. Geoffrey Moore and Edward Leamer, and the “high frequency” weekly variation on the same, I also have several “alternate” recession forecasting models. The most noteworthy model is really a consumer nowcast. It turns on consumers running out of options to to continue increasing purchases (i.e., no interest rate financing, no wage real wage increases, and no increasing assets to cash in). When that happens, and consumers turn more cautious by saving more, a recession begins.
I first posted the model 10 years ago under the title, “Are Hard Times Near?  The great decline in interest rates is ending.”  The history is straightforward.  Since the 1970s, real average hourly earnings had declined.  Average Americans coped by spouses entering the workforce, by borrowing against appreciating assets, and by refinancing as interest rates declined.
By 1995 the spousal avenue peaked.  Borrowing against stock prices ended in 2000.  Borrowing against home equity ended in 2006.  When interest rates failed to make new lows, the consumer was tapped out, and began to curtail purchases.  A recession began – and its effects lingered for a long time. “Hard Times” had indeed begun.
What does the consumer model show now? I haven’t updated it in about two years, and there have been noteworthy developments. Let’s take a look.
Real hourly wages haven’t increased since last July, are up only 0.1% YoY and barely more in the past two years: 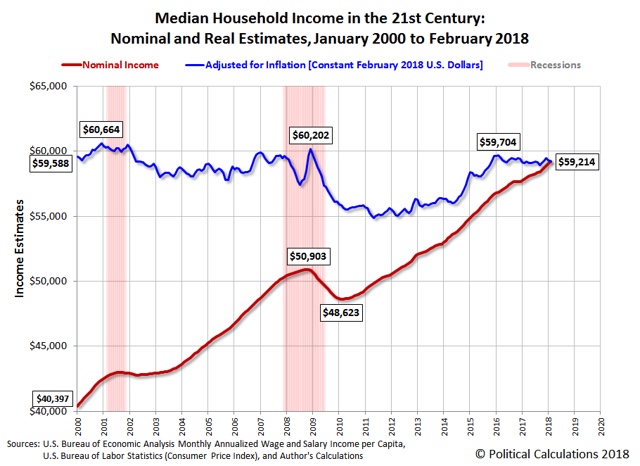 Mortgage rates haven’t made a new low since 2013, and if anything are trending up, on the verge of breaking a 30 year trendline:

As a result, refinancing at lower mortgage rates is dead (shaded line): 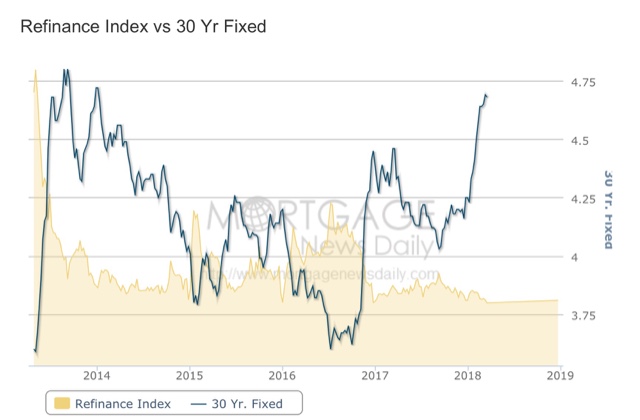 In terms of cashing in assets, the stock market hasn’t made a new high in nearly 3 months:

Of course, there’s nothing to preclude it making new highs later this year, but for the moment, that method of freeing up cash is stalling.
The one asset that is still very much appreciating, of course, is housing: 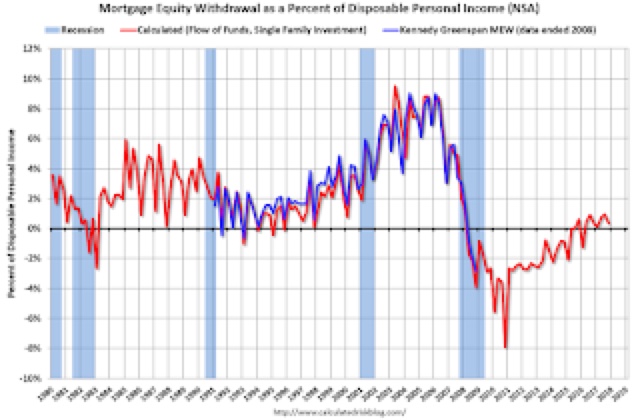 So consumers are more stretched than earlier in the expansion.
The recent upturn in the savings rate would be more concerning, except that household debt obligations as of Q4 2017 were still rising:

For this model to signal recession, consumer debt obligations would have to start to fall.
Put this all together, and we have consumers in a more precarious position than they have been at any previous point in this expansion. But on the other hand, home equity withdrawals are still an option and are being used. The most recent available data does not show consumers becoming more focused on paying down debt. As with my primary forecasting model, the lynchpin looks like the housing market.
Comments Off on The consumer edges closer to the precipice | Digg Facebook Twitter |