HEADLINES:
Here are the headlines on wages and the chronic heightened underemployment:
Wages and participation rates
Holding Trump accountable on manufacturing and mining jobs

The more leading numbers in the report tell us about where the economy is likely to be a few months from now. These were mainly negative.
Other important coincident indicators help  us paint a more complete picture of the present:
Other news included:
SUMMARY

This was a surprisingly weak report. While manufacturing employment continued to gain, and measures of underemployment fell (but not to new lows), most of the indicators fell. Some of these, like aggregate hours, the employment population ratio, and the labor force participation ratio, simply gave back last month’s improvement.

But that three of the four leading indicators, plus revisions, in the report declined is not welcome news (although obviously only one month), and wage growth for ordinary workers remains tepid at 2.4%.

If the jobs boost from last autumn’s spending by consumers is over, then the slow late-cycle deceleration in jobs growth can be expected to resume.

Here is the quarter on quarter growth rate of jobs since the beginning of this expansion:

The last three months together were still the best in the past year. But my suspicion is that we will see a resumption of the downtrend that began in early 2015 going forward.

Posted by New Deal democrat at 8:13:00 AM Links to this post

– by New Deal democrat
April reports started out this week with three positive readings of short leading indicators.
First, the ISM manufacturing index, and in particular its new orders subindex, pulled back slightly but remained at very strong levels: 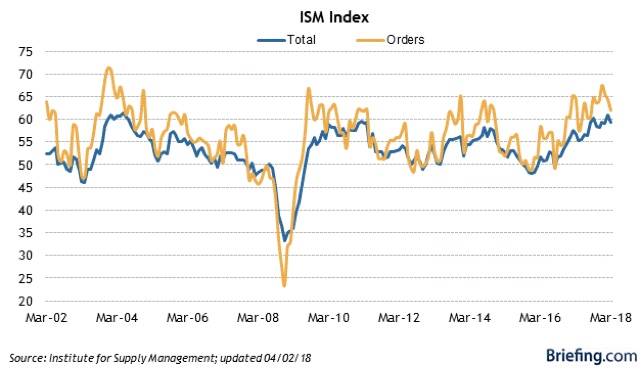 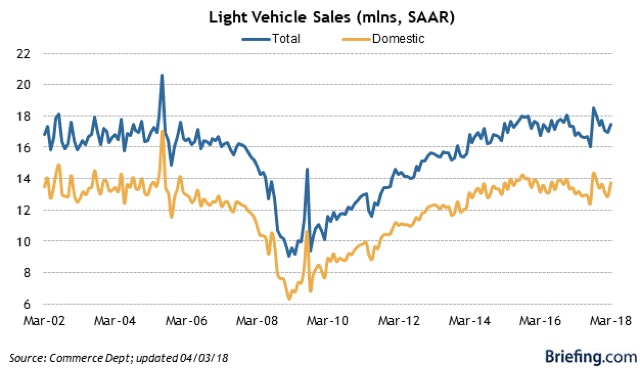 This series tends to broadly plateau during expansions. If it were to drop below 16.5 million units annualized, especially for longer than one month, that would be cause for concern.
With GM dropping out, the future of this data is uncertain. Vehicle sales ex-GM would still be a worthwhile metric, but unless that is calculated, it will only be useful on a m/m basis until at least there is one year’s worth of data — and that assumes other manufacturers don’t follow GM’s lead.
Finally, factory orders also increased. Below I am showing the core reading ex-aircraft and defense:

The last three months have seen the highest readings in nearly 4 years. Note that this data series is noisy, and wasn’t leading at all in 2008, so it is of very low utility.
In terms of the economy over the next 3 to 6 months, so far, so good in April. Tomorrow we will get two more short leading indicators, manufacturing workweek and short term unemployment, as part of the jobs report.
Comments (2) | Digg Facebook Twitter |
2 Comments