As an initial matter, this is a good time to remind you that the data is the data is the data. It’s not partisan. I’ve seen some of the same people who were touting “It’s still Obama’s economy” all last year (and I agree with that) now suddenly saying that the Q3 BED job losses show that “the Trump/GOP economy is tanking” No, they don’t.
The big flashing red neon sign is in this state by state map (h/t Bloomberg): 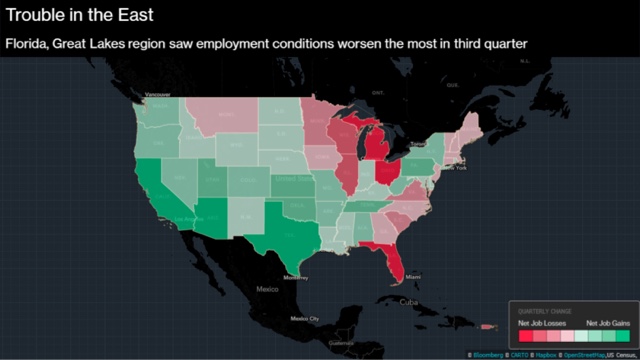 While job losses in Michigan and Ohio might not be so unexpected, for major job losses to happen in Florida sticks out in the data like a sore thumb.

This morning they made a new 48 year low, at 209,000. Wow!
When The End is really Near, I’ll tell you. If my systems are right, hopefully about a year in advance. If the economy is left to its own devices, The End is not Near now.
Comments (4) | Digg Facebook Twitter |
4 Comments