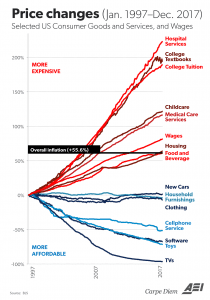 Otherwise why would Mark Perry write this nonsense:

The chart above (thanks to Olivier Ballou) is an update of a chart we produced last year about this time, and shows the percent changes since January 1997 in the prices of selected consumer goods and services, along with the increase in average hourly earnings in this version … Blue lines = prices subject to free market forces. Red lines = prices subject to regulatory capture by government. Food and drink is debatable either way. Conclusion: remind me why socialism is so great again.

PGL: The reason that prices of certain services have risen relative to the price of manufactured goods is socialism? There could be no other explanation. I guess Perry has never heard of William Baumol’s cost disease:

The example Baumol and the late William G. Bowen made famous is that of the string quartet. The number of musicians and the amount of time needed to play a Beethoven string quartet for a live audience hasn’t changed in centuries, yet today’s musicians make more than Beethoven-era wages. They argued that because the quartet needs its four musicians as much as a semiconductor company needs assembly workers, the group must raise wages to keep talent—to keep its cellist from chucking a career in music and going into a better-paying job instead. The effect now known as Baumol’s Cost Disease is used to explain why prices for the services offered by people-dependent professions with low productivity growth—such as (arguably) education, health care, and the arts—keep going up, even though the amount of goods and services each worker in those industries generates hasn’t necessarily done the same.