China, not automation, is by far the biggest factor in the decline of prime age labor force participation

China, not automation, is by far the biggest factor in the decline of prime age labor force participation

Perhaps the biggest mystery in economic analysis in the last few years has been trying to find an explanation for the big decline in labor force participation since 1999.  A recent NBER working paper by Abraham and Kearney has posited the most comprehensive answer to date.  Since it was summarized in this Washington Post article, I’m just going to quote a few paragraphs and suggest that you read the entire article.

At least half of that decline probably was due to an aging population. Explaining the remainder has been the inspiration for much of the economic research published after the Great Recession.

University of Maryland economists Katharine Abraham and Melissa Kearney built [a method to arrive at a detailed analysis of the data]. After reviewing the most robust research available and doing some rough-but-rigorous math to estimate how much job loss each phenomenon can explain, the duo discovered something surprising: pretty much all the missing jobs are accounted for.

Just as important, they pinpointed the culprits. In a draft paper released by the National Bureau for Economic Research this week, Abraham and Kearney find that trade with China and the rise of robots are to blame for millions of the missing jobs. 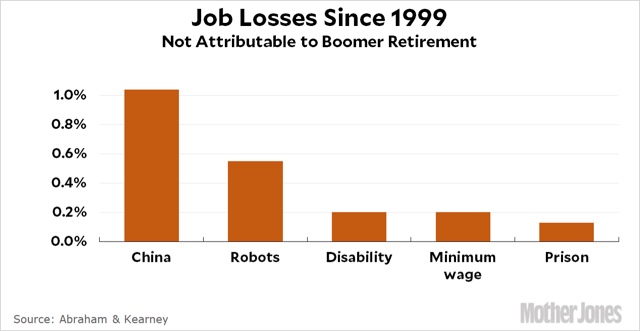 Notably, the authors found that both immigration and the “Mr. Mom” contribution to this number was trivial. One thing I wish they had explored, but I did not see any comment, is the issue of child care costs causing some mothers to decide it would be better to stay at home and raise their children vs. be in the labor force, which I concluded several years ago was probably a much more significant factor.
The total above is virtually equal to the entire decline in the number of prime age persons in the labor force since 1999.  But the most significant point for me is that *almost half* of all of the decline prime labor force participation can be ascribed to:

China’s accession to the World Trade Organization in 2001 and its subsequent rise to the top of the global export market.

Something tells me that that a lot of those workers who were displaced by China live in places like Pennsylvania, Michigan, and Wisconsin.  A big “thank you” to Bill Clinton, Brad DeLong and all of the free-trader Democratic neoliberals for doing their part in the rise of Donald Trump.
Comments (54) | Digg Facebook Twitter |
54 Comments