First of all, sorry for the light posting this week.  There’s not much news until tomorrow and Friday, and yesterday was a travel day.  So…..
While existing home sales are about 90% of the entire housing market, they are the least important economically, because of their much more limited impact since they do not involve any new construction.

That being said, December’s existing home sales, at 5.57 million annualized, were only 1% above last December’s pace. First and foremost, that’s a matter of higher mortgage rates this year. In fact, mortgage rates haven’t made a meaningful new low since 2013 — although they briefly neared that low in late 2016 — and that has shown up in a gradual deceleration of the pace of sales since that time, as show by Bill McBride’s graph below: 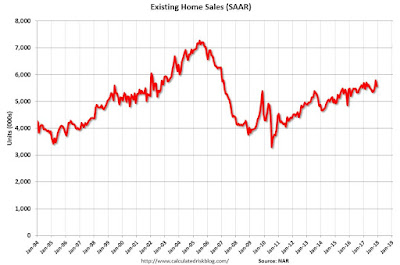 Here is a close-up of the last three years from FRED, excluding today’s report, which hasn’t been posted yet:

Here’s the same data YoY, compared with housing starts in red, averaged quarterly to cut down on the volatility:

The same pattern of decelerating growth is shown in both series.
Although sales turn before either prices or inventory, the consistent price increases and lack of inventory are playing a role in this deceleration, contra which is the demographic tailwind.
Tomorrow the more important, and leading (but very volatile) new home sales report will be released.  I am expected a significant downward revision in November’s blowout number.
Comments Off on A note on December existing home sales | Digg Facebook Twitter |