Here’s something about the GOP House and the GOP Senate:  they each passed tax bills (supposed to come out in a “conference” agreement sometime today) that diss the United States’ working class taxpayers.  White or black, Christian or Jew or other, citizen by birth or naturalized citizen–workers are treated as an inferior “taker” class and owners are treated as a superior “maker” class–the same old GOP class warfare that has been evidenced in Republican-driven tax legislation for decades.  That shows in the provisions that have been discussed quite a bit already, even though there is no official distributional analysis and even though the Treasury Department put out a one-pager claiming to provide an analysis showing huge economic growth would eliminate any deficits (based on both the tax “reform” legislation and promised cost-cutting “reforms” to Medicare and Social Security):

When the health care mandate removal is combined with the other provisions,  “On net, the poor would actually lose out in all years once this effect is taken into account.”  Dylan Matthews, The Republican tax bill that could actually become law, explained, Vox.com (Dec. 14, 2017).  The following Tax Policy Center graph from the Vox article (using the Urban-Brookings Microsimulation Model) shows that by 2027 the top 0.1% end up doing much better (average tax cut for the top 0.1 percent is $221,550 a year).  The bottom 20% do worse while the middle–the second and third quintiles–have a very insignificant plus (average tax cut of the third quintile is $490).   Within the third or middle quintile, more than 62% of taxpayers that earn between $54,700 and $93,200 would see their taxes go up, “[b]ut only about 0.1% of the very richest one-thousandth of Americans would see a tax hike.”  Id.  Early gains–though small, intended perhaps to benefit the GOP in earlier votes–don’t last because the individual cuts aren’t permanent.  A change to chained CPI for indexing brackets amounts to a tax increase on individuals, while the permanent corporate tax cuts mean rich and very rich do well while middle and upper-middle lose out. 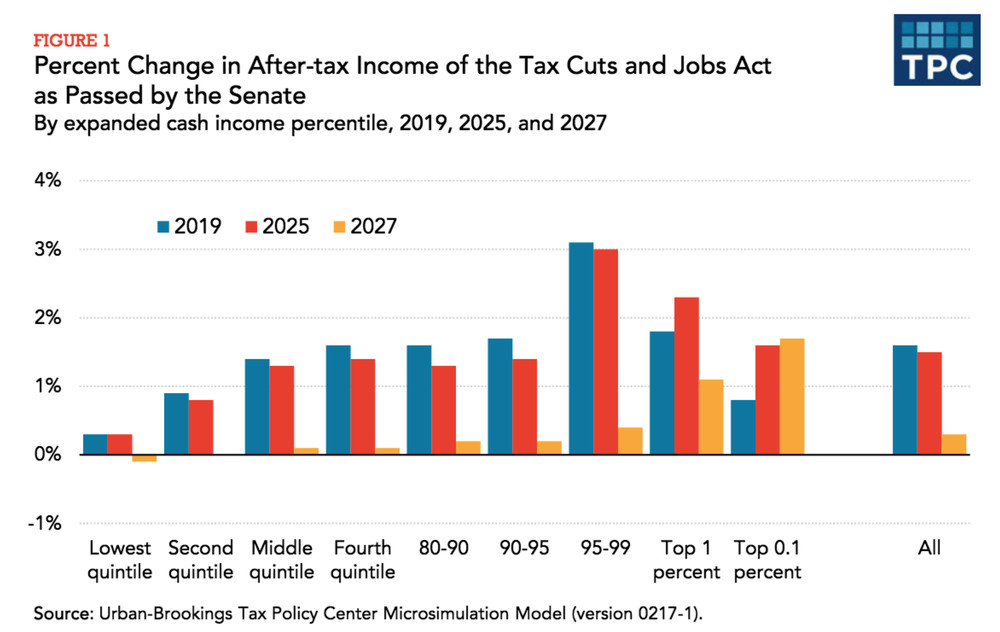 Maybe the most damnable characteristic of these House and Senate provisions, other than the sheer favoritism for the already wealthy, is the favorable treatment in determining the rate at which income is taxed for “owners” compared to the disfavored treatment for taxation of workers’ wages.  As the Tax Policy Center notes, the Senate version of the tax bill “would reduce taxes on business owners, on average, about three times as much as it would reduce taxes on those whose primary source of income is wages or salaries.”  Paul Krugman, Republicans Despise the Working Class, NY Times (Dec. 15, 2017), at A27.  And this dissing of the working class goes along with treating partners in real-estate partnerships (like the Trump family and many other real estate developers) with kid gloves:  “a partner in a real estate development firm might get a far bigger tax cut than a surgeon employed by a hospital, even though their income is the same.” Krugman, Republicans Despise the Working Class, NY Times (Dec. 15, 2017) (quoting Howard Gleckman at the Tax Policy Center).

The Vox article describes the pass-through provision as part of its “here’s who would be better off” section:

Pass-through companies, like the Trump Organization, which get a new deduction reducing their tax burden. The House-Senate compromise bill allows people with pass-through income to deduct a portion of that income from their taxes; the deduction is reportedly for 20 percent of pass-through income, less than the 23 percent under the Senate-passed bill.  Dylan Matthews, The Republican tax bill that could actually become law, explained, Vox.com (Dec. 14, 2017).

Note that this is an off-the-top reduction of what would otherwise be personal taxable income taxed at the taxpayer’s individual tax rate.  Workers who are paid wages get no such break. And wealthy people will use good lawyering and tax planning to organize their businesses so that their income is counted as pass-through income rather than wages. This is just a continuation of a trend of favoring passive ownership of capital in this country.  See, e.g., the Berkeley Blog, Wealthy investors to win bigly with Republican tax plan ( Nov. 9, 2017).

Imagine a company where two siblings as owners and a third sibling is the principal employee.  They all receive about the same income from the company–for the worker bee, as wages and for the other two, as a profit share.  The worker bee does all the creative thinking and working.  So the two owners pay tax under this provision on 20% less income than the worker bee.  And this is true in an economy in which economists are generally agreed that pass-throughs are currently taxed favorably, taking everything into consideration, and “don’t need another break”.    Dylan Matthews, The Republican tax bill that could actually become law, explained, Vox.com (Dec. 14, 2017).  This pass-through provision is as clear a snubbed nose to all those who work hard to earn a decent living as one can imagine.  Fact is, the “owners” are often the takers, and the “workers” are the makers.

PS. The Vox article suggests that the corporate tax break is justifiable, based on the GOP “economic theory” that claims that a lower corporate tax rate will “spark so much additional investment in the United States that it would bid up wages and leave the middle class better off through its indirect effects.”  Id.  This is just another way to state the “supply-side” “trickle-down” theory that has been relied on  for decades by right-wingers but has never been shown to be justified empirically.  In 2004, the GOP made the same claim for its “repatriation tax holiday” for multinational corporations, claiming that the low tax would allow those corporations to invest and expand, leading to job creation.  It didn’t.  It led, instead, to share buybacks and more money for the shareholders.  In fact, a large number of repatriating corporations that did share buybacks with the money also laid off thousands of workers.

PSS.  The Vox article also suggests that the limitation of the state and local tax deduction for individual taxpayers (but not for businesses) has a “reasonable case” supporting it.  Sure, the benefit of the state and local tax deduction is regressive, in that higher income taxpayers in larger houses with larger property taxes and larger incomes get more of a deduction.  And yes, it tends to benefit those states with higher state income taxes that are used to develop infrastructure and education.  But that misses several points in response.  First, for people at the upper-middle income bracket, the Alternative Minimum Tax generally limits the availability of the state and local tax deduction.  Second, people who currently own homes and are paying taxes on those homes and living in states with higher taxes likely took the availability of a property tax deduction into account in determining what they could pay for their home: the bill does nothing to provide a reasonable transition for these folks that takes their expectations into account.  Third, when the GOP is trying to counter a Democratic president, it always makes the argument that it makes more sense to support states in allowing them to experiment with different ways of raising revenues and supporting their economics.  That’s what the “blue” states have done:  they have recognized that having higher taxes allows development of infrastructure, support for education, funding for research and other priorities, and these expenditures have created a more sustainable economy and better standard of living in those states–exactly what the “state experimentation” is supposed to do.  Yet the GOP provision on state and local taxes is now justified as a way to undo the benefit for “rich” states without doing anything to help the “poor” states.  (In fact, Ryan and McConnell have made it clear that their goal is to harm the poor states by reducing funding for Medicaid, Medicare and Social Security on which those states in particular depend.)