We got the last two significant data points of the year this morning: personal spending and new home sales.  Both rose significantly. BUT there are big drawbacks to each.
First of all, take a look at the personal savings rate:

It just made a new low, at 2.9%, for this expansion.  On the one hand, this is a concrete measure of consumer confidence, in that consumers are comfortable spending more of their income. But at the same time, a big decrease in the savings rate, such as we have had over the last 16 months, tends to happen later in expansions, and makes consumers more vulnerable to any inflationary shock.
Similarly, new home sales had a big +17.5% monthly jump in November.  Here’s what the data for both new and existing home sales looks like (note FRED hasn’t updated with this morning’s number yet):

BUT… new home sales are one of the most drastically revised of all numbers.  And the big jump to 685,000 in October was revised all the way down to 624,000! Meaning that October did not set a new expansion high after all.
I suspect a similar revision is in store for November.  Here’s why: take a look at the chart below showing new home sales broken down by region: 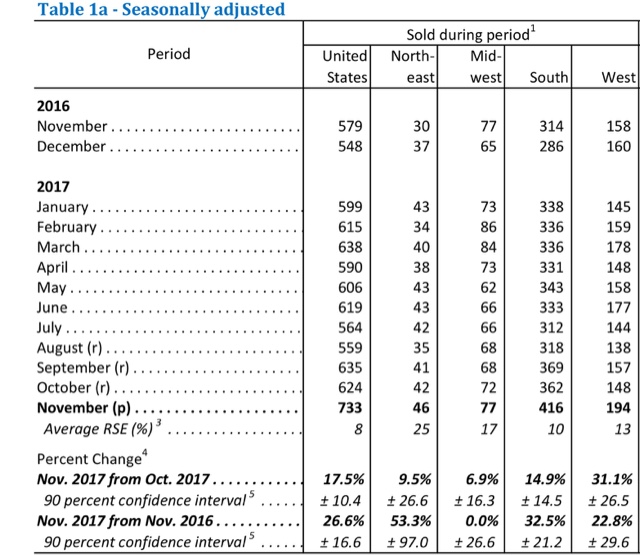 Look at the huge, ~50,000 jumps for the South and the West.  The South might make sense if it is still a post-hurricanes rebound.  But does anyone seriously think there was a 30% jump in a single month in the West?!? So I strongly suspect we’re going to get another big downward revision next month.

Next week I’ll post a final update on my “Five graphs for 2017” along with a review of the 2017 forecast I made one year ago. After that, in the new year, I’ll consider whether or not the US economy is actually entering a Boom.  See you th