What is the real cost of shelter?
Over the last decade there has been lots of discussion of housing prices in isolation. Sometimes that discussion includes an inflation adjustment — which is problematic, since housing constitutes nearly 40% of the entire consumer price index, so in essence housing is being deflated largely by the cost of housing itself! From time to time there has also been a little — but not much — discussion of rental prices.

But I have never seen a discussion of the relationship between the relative cost of homeownership vs. renting, particularly as a function of the household budget.

That is a curious void. For the choice (or ability) to live in the residence one desires isn’t a matter of its cost by itself, but also the relative cost of the type of residence.  What is the cost of a house compared with the cost of an apartment (such as luxury apartments)? How expensive are each of them compared with a household’s income?  If both are too expensive, maybe the choice is made to live with mom and dad as an extended family.

The purpose of  this post is to fill that void. Herein I compare the cost of home ownership — in terms of the down payment, but also in terms of the monthly mortgage payment — with the cost of renting, and further, compare each to the median household income (since by definition, the people renting the apartment or living in the house are a household!).

Let’s start with the “real” cost of a down payment on a house. The first choice of most people is to reside in a single family house.  Most people who follow economics are familiar with the housing bubble, bust, and recovery in the past 15 years.  Here’s what the median house price looks like measured in comparison with median household income:

In the above graph I’ve divided house prices by 10, to measure the share of annual household income needed for a 10% down payment.  The graph would look exactly the same, just with different nominal values, assuming a different percentage of down payment.

What is surprising here is that house prices now are even higher than they were at the peak of the bubble in 2005 as compared with median household income.  As we’ll see below, there are good reasons to believe even these lofty prices do not mean we are in another bubble. But perhaps they are an important reason why, even more than eight years into the current economic expansion, home sales are barely above where they were at the bottom of previous recessions:

But if down payments are so dear, why have people chosen in increasing numbers to purchase houses?  Perhaps that’s because, when we compare monthly payments, and compare them with the alternatives, the picture looks entirely different.

Let’s start with the most obvious comparison.  Here is the median asking monthly rent for an apartment in the US since 1995 (note: the series goes back to 1988):

Now, here is what it looks like in comparison with median household income: 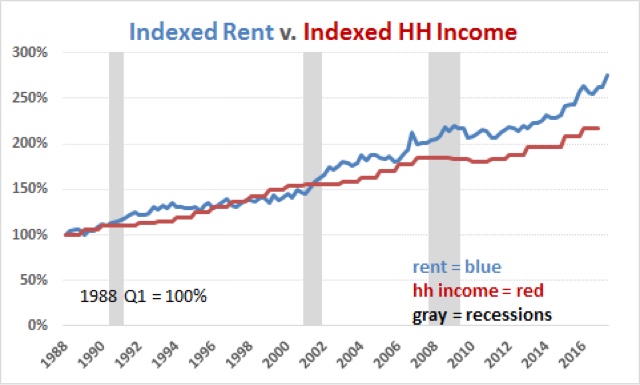 If house prices have risen to new highs several times since the turn of the Millennium, so have apartment rents — almost relentlessly. You can use this property management review site if you’re looking for an affordable property rental. 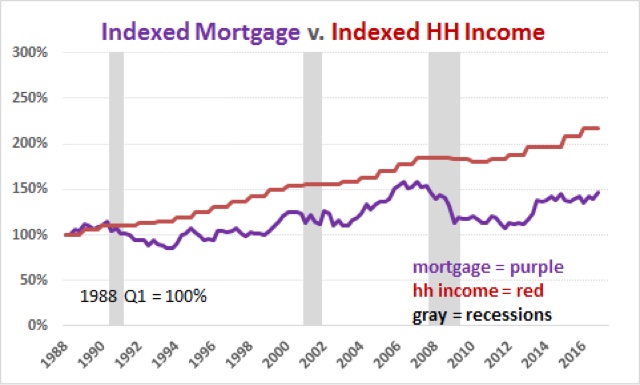 Notice that the monthly payment for the median house isn’t extreme at all! In fact, currently it is very moderate in terms of the long term range. Let’s break that down by showing the percentage of median monthly income (1/12 of the annual) that one month’s mortgage payment consituted (note: I am assuming a 10% down payment, with 90% mortgaged to be consistent. Using a different down payment does not change the shape of the comparison at all, only the nominal values):

Monthly mortgage payments are moderate because, even as house prices have risen, mortgage rates fell to new lows not seen in over half a century several times during this expansion, most recently in the summer of 2016: 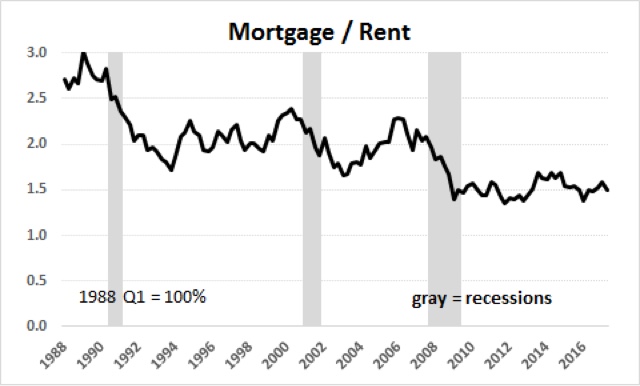 Most notably, the overall trend in the last 30 years has been that monthly mortgage payments have fallen from over 3 times median rent to about 1.5 time median rent now. Put another way, even at the peak of the housing bubble, the monthly carrying cost of a house was about 2.3 times the median cost of renting an apartment. At the bottom of the bust, that fell to 1.4 times the cost to rent. For the last five years, monthly mortgage payments have hovered near 1.5 times the median asking rent.

By comparing the “real” cost of housing to renting, both in terms of down payments and monthly mortgage payments, we can make sense of some of the biggest trends in the market for shelter.

Record down payments are keeping an increasing number of prospective buyers, especially first time buyers, shut out of the market for buying a house. An enormous number are living in apartments instead. This explains both the multi-decade lows in the homeownership rate as well as the recent 30 year lows in the apartment vacancy rates, as a disproportionate number of adults are forced out of home ownership and into apartment dwelling. 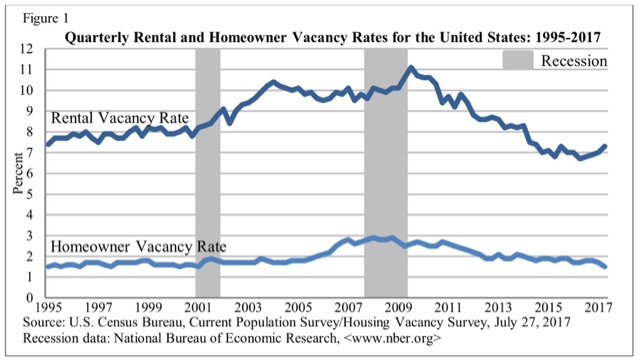 With both real house prices and real apartment rents at new highs, perhaps it is no surprise that a record number of young adults are choosing, or maybe stuck with, continuing to live with mom and dad: 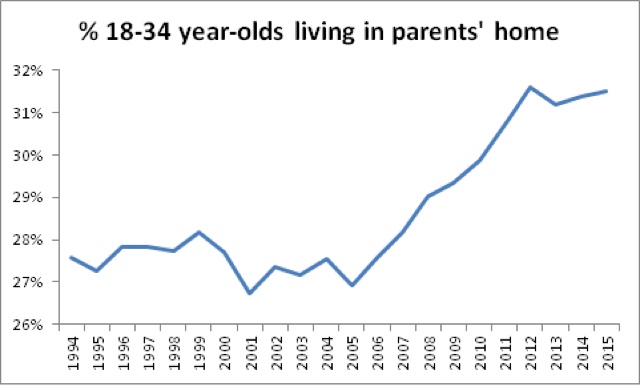 Note, by the way, that these adults are included as part of their parents’ household for purposes of the homeownership rate above.

On the other hand, with monthly mortgage payments at such relative lows compared to both rental payments and median incomes, if one can get past the down payment, home ownership is clearly the better choice. Thus single family home construction continued to rise until at least the beginning of this year, and has declined only slightly with the roughly 1% increase in mortgage interest rates:

[Special thanks to Mike KImel for preparing the customized comparative graphs used in this article.]