The US looks like government of, by, and for senior citizens.
President Donald Trump just had his 72nd birthday. He assumed office at age 71, the oldest person ever to do so.
In Congress, Senate Majority Leader Mitch McConnell is 75 years old.  His Democratic counterpart, Charles Schumer, is a relatively spry 66. The median age of US Senators is 63. A full 30 Senators are age 70 or older. Sixteen of them are over 75. Nine are over 80!
The oldest, Diane Feinstein of California, is 84 years old and just announced that she intends to run for re-election. Should she win, by the end of her term, she will be 91 years old — if she survives. The average life expectancy for an 85 year old woman is 6.9 years. In other words, she will have nearly a 50% chance of dying in office before she completes her term.
In the House of Representatives, Speaker Ryan is the baby of the group at age 47.  Democratic Minority Leader Nancy Pelosi is 77. The average House member is 57 years old, the oldest average ever. Over 30% of the Members are age 65 or older. Over 15% are over 70. Twelve Members are over 80!
The median age of Justices of the Supreme Court is 67. Two Justices are over 80.  One is 79. In the 19th Century, the average Justice served about 10 years. Now they sit on average close to 25 years.
In short, the majority of the leadership of all three branches of the US government are old enough to collect Social Security and Medicare.
Forget Boomers, most of the US leadership belongs to the Silent Generation, and formed their basic political opinions in the 1950s during the days of Ike and Senator Joseph McCarthy, and when court-ordered racial integration was just beginning.  And it shows.
In survey after survey, when it comes to social justice issues, the older the person, as a general rule the more conservative their opinions.  Here is the demographic breakdown on attitudes towards gay marriage: 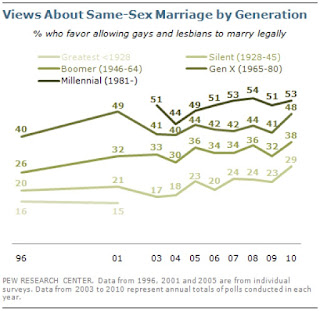 And here is the breakdown as to immigration: 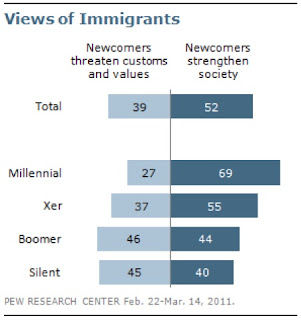 Since people over age 45 are the most likely to vote in midterm elections: 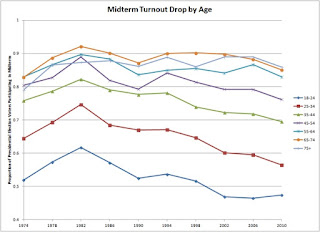 these are the age groups who are having their views enacted.
And when it comes to partisanship, the most reliably conservative, Republican generation has been the Silent Generation (along with the tail end of the Boomers and the early Gen X, who came of age during the stagflationary 1970s): 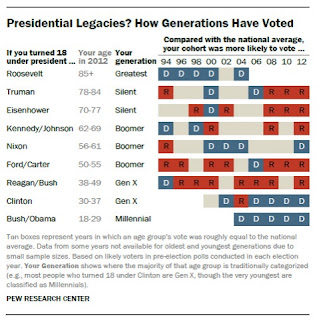 While, as the chart shows, the late “Greatest Generation” leaned blue, but they have almost all passed from the scene. Thus the midterm elections have been dominated by an extremely conservative electorate. They have elected people in their own age group.  And the politicians they elected are serving their interests.
This is government of, by, and for the elderly: rule by gerontocracy.
Comments (13) | Digg Facebook Twitter |
13 Comments