Words cannot describe the torment experienced by the data before they confessed what the University of Washington team got them to confess. I can only urge readers with an open mind to study Table 3 carefully. The average wage increase, from the second quarter of 2014 to the third quarter of 2016, for all employees of single site establishments was 18 percent. Eighteen percent! That is an annual increase of almost 8 percent. For two and a quarter years in a row. Not bad. And the number of hours worked of ALL employees of single site establishments? Up 18 percent in a little over two years. That too is an increase of almost 8 percent per annum.
Now multiply that wage by those hours and the total payroll for all employees rose 39.5 percent over the course of nine quarters. An annual rate of increase of 17.5 percent. These are BIG numbers. They are freaking HUGE numbers.
It must have taken a team of at least six academics to extract a 9.4 percent decline in hours from the 86,842 workers (out of a total of 336,517) earning under $19 dollars an hour at these single-site establishments. Look at the Table and weep. 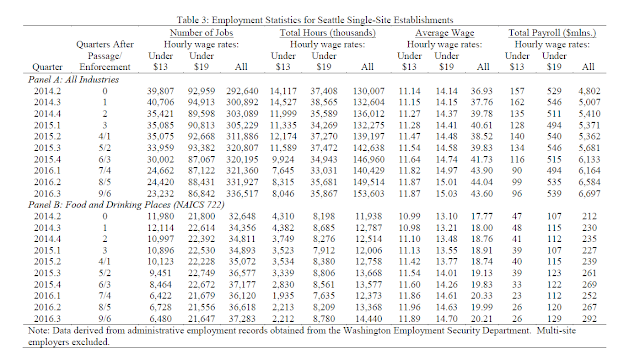 Now, as I mentioned in a comment on Peter’s post, bracket creep alone could do away with at least 7 percent of the missing hours of workers earning under $19 and hour. That is unless we assume that everyone making between about $18 and $19 got approximately zero wage increases while the rest of the crew were getting 10 percent raises. Look at the God damned table. This isn’t rocket science.