There has been a lot of very good critique of the methodology of the University of Washington’s study of the minimum wage increase in Seattle. However, I want to repeat and emphasize a very simple point that jumps out. 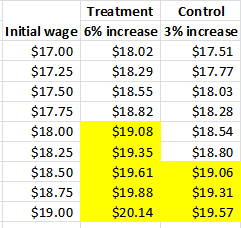 See how much worse off the treatment group is than the control group? The yellow cell occupants haven’t lost their jobs, they have simply been excluded from their respective groups because their wage now exceeds the static cutoff amount.

Of course, I wondered if the study authors could be making such a simple arithmetic mistake. So I reached out to one of the authors, who generously replied but appeared to confirm that they relied on a static threshold. I say appeared because some of the replies were, shall we say, “ambiguous” but did not disclaim use of a static threshold when I sought explicit confirmation or denial.