What with everything else going on, this Trip Gabriel essay on truckers hasn’t gotten as much attention as it should. But it’s awesome — and says a lot about what is and isn’t behind the decline of blue-collar wages.

Trucking used to be a well-paying occupation. Here are wages of transportation and warehousing workers in today’s dollars, which have fallen by a third since the early 1970s: 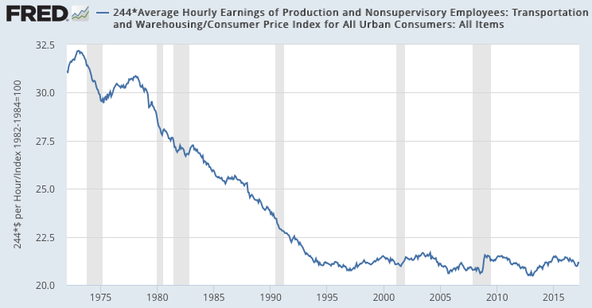 Why? This is neither a trade nor a technology story. We’re not importing Chinese trucking services; robot truck drivers are a possible future, but not here yet. The article mentions workers displaced from manufacturing, but that’s a pretty thin reed. What it doesn’t mention is the obvious thing: unions.