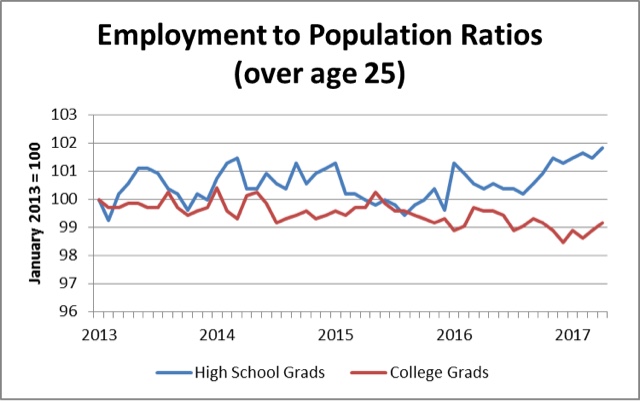 As the economy began to take off – in particular beginning in 1994 –  the e/p ratio of college graduates actually declined by about 1%, while the employment rate of persons with only a high school diploma increased.

Here is another look at the same data, showing the amount by which the e/p ratio for those with college degrees has historically exceeded those with only high school diplomas:

This is part of a broader picture. We get the same pattern when we compare U6 underemployment with U3 unemployment, as in the below graph which shows the amount by which U6 has historically exceeded U3:

Another marginalized group is African Americans, and here, we have longer data, going back to 1972. The below graph shows the amount by which black unemployment has historically exceeded white unemployment:

It’s the same pattern.  As the economy improves during an expansion, more and more marginal, and marginalized, potential employees find work.

These same groups typically are first to feel a downturn, so the fact that the data in Prof. Baker’s graph hasn’t started to reverse is good news.