Prof. Brad DeLong in an article earlier this week made a bold claim:  that “US trade agreements have not substantially harmed manufacturing employment. Period.”    I am making the equally bold claim that he is wrong.  There are at least two major points in his article that I believe are plainly incorrect.

First, in making his case that US manufacturing jobs have disappeared because of efficiency and the strg dollar, Prof. Brad DeLong invokes comparisons to Germany.  Let me quote him at length:

Germany is widely believed to have a first-rate manufacturing sector, yet it has seen the same pattern as the US

Consider a country that has, everyone agrees, done everything right as far as nurturing its manufacturing sector is concerned: Germany

Respectfully, Professor, your comparison with Germany is a misleading one. Let’s start with a comparison of the number of manufacturing jobs in Germany vs. the United States since 1975:

The only reason that both are conquerable starting in the 1970s is because Germany’s %age collapsed in tne early 1990s, as part of the
integration of Soviet East Germany into the unified country. Take that away and the experience in the two countries isn’t even close. Since 1995, Germany has only lost about 10% of its manufacturing jobs. The US at its worst after the Great Recession lost over 1/3 since 1995.
So it is more accurate, using your own yardstick,to  call that addition 2/3 loss of manufacturing jobs “the excess shrinkage of US manufacturing.”
To be fair, DeLong does mention the integration of East Germany into the whole, but he never explains why this doesn’t spoil his comparison. What Germany did wasn’t on par with NAFTA.  It was on par with admitting Mexico as a state in the US!  Yeah, I think if Mexico were admitted as a US state, manufacturing employment in the newly united whole would be a lot lower.
And what DeLong does say about East Germany actually *undercuts* his argument:

When those artificial supports for bad businesses disappeared, did East Germany’s workers move on to more productive work? Yes, most of them did. Many moved to West Germany and its more robust economy. Some, however, did not. And enough wound up on the dole that the sociological aftershocks are still being felt today: Even 25 years later, unemployment in the former East Germany is 3 percentage points higher than unemployment in the former West Germany. But consider this too: An East Germany that was only 40 percent as well off as West Germany in 1989 is now 80 percent as well off as West Germany. It is very hard to say that the  shedding of inefficient, unproductive, and low-wage manufacturing jobs was a minus for East Germans.

In the first place, those 3% additional unemployed might disagree with you.  But to return to my Mexico analogy, if 20 years after admitting Mexico as a US state, Mexico had improved from 40% to 80% as well off as the pre-existing US isn’t the issue. The issue under this circumstance is, whether or not the pre-existing US was better off.
In other words, take East Germany out of the equation, and focus solely on the areas of former West Germany, and maybe you’ve got a point.
In fact, when we take a broader view of manufacturing employment in other countries, we see that Germany is the outlier among “strong labor” countries: 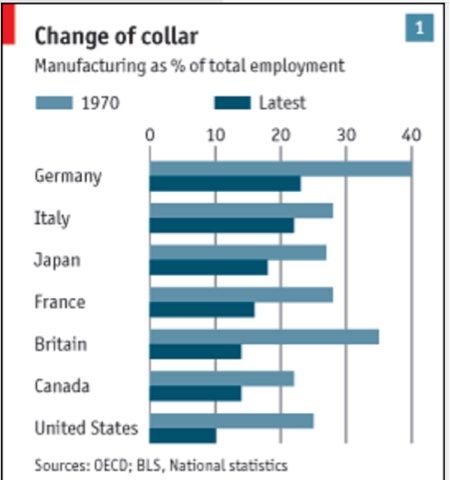