Full Employment and the Myth of the General Strike

Georges Sorel thought he had made a ‘happy choice’ with his use of the term ‘myth.’ But he soon was disabused of that illusion by critics who dismissed the anachronism of myths and others who accused him of falsifying “the real opinions of revolutionaries.”

In his essay, “Myths of the Twentieth Century” published three decades after Sorel’s Réflexions sur la violence,,” Robert Binkley credited Sorel — along with Henri Bergson, William James, Vilfredo Pareto and Sir James Frazier — with having “prepared the way” for the 20th century’s metaphysical ‘Tower of Babel’ and, consequently, with having betrayed ‘truth’. “For truth became a variable, determined by a personal equation, a problem, or a culture. As the prestige of truth fell, the prestige of myth rose… Men began to talk of the myth of science, the Christian myth, the myth of the nation, the myth of socialism, the myth of the general strike.”

Binkley must have realized that he was blaming the messenger for the message. Whatever science and progress might have meant to its 19th century eulogists. their status as “truth” was contingent and ephemeral. Critics did not concoct out of nothing the defects they criticized.

These four are: the original Christian myth, from which the others are descended ; its secularized version of the world order or great society; the materialistic version with its eschatology of the proletarian paradise; and the antithetic or reactionary myth of the nation, with its mystery of blood and soil.

I will take the liberty of designating Binkley’s “world order or great society,” the myth of political democracy, which is consistent with its Wilsonian heritage that Binkley invokes. Sorel’s myth of the general strike takes on greater substance in comparison and contrast to the political democracy myth.

Elections per se are not intrinsically democratic any more than they are intrinsically fascist, socialist or spiritualist. Elections offer a choice between given candidates for given offices in given institutions. They are affirmations of the status quo. Rejecting that status quo is never on the ballot, least of all when voters are led to believe they have an option of rejecting it.

The reaction against these reforms from the business lobby was swift, harsh, and unrelenting. “Free enterprise” — not economic democracy — was upheld as the American Way. “Industry” (that is to say, property) — not collective action — was proclaimed the fountainhead of shorter hours, higher pay and the world’s highest standard of living. Any other way was un-American.

No vision of economic democracy was on offer in last month’s U.S. Presidential elections, only a Hobson’s choice between two versions of economic despotism — a neo-liberal, technocratic dynasty and a wheeler-dealer, flim-flam man. The glaring disparity between the two and a half million popular vote margin for the former and the gerrymandered electoral college outcome in favor of the latter only added incongruity to effrontery. Ironically, the creed of individualism raises no objection to the design of winner-take-all state sovereignty trumping the principle of popular sovereignty. On the contrary, the denial of political democracy is vindicated by its effectiveness in preventing the tyranny of full employment, collective bargaining and fair labor standards.

If, as Branko Milanovic claims, communism has perished as a secular religion, political democracy only perseveres as a hollowed-out husk. In fact, the idea of political democracy is more invested in the threat of a general strike than any 21st century pundit would care to imagine. Electoral reforms in Britain during the 19th century were advanced on the premise that it was “to prevent the necessity of revolution,” as Whig Prime Minister, Lord Grey put it in 1831. The truth of that proposition was illustrated eleven years later in the general strike known as the Plug-Plot Riots, which melded outrage over wage cuts to Chartist demands for universal male suffrage, annual parliamentary elections by secret ballot and equal-sized constituencies.

Andreas Malm recounted the history of that 1842 general strike in Fossil Capital: The Rise of Steam Power and the Roots of Global Warming. The narrative is essential to Malm’s prescription for politically addressing climate change: “What is needed today,” Malm asks, “if not some global version of the Plug Plot Riots? Go and stop the smoke!”

What, then, remains of political democracy, economic democracy and the long-term problem of full employment? The myth of political democracy has repudiated itself. What was touted toward the end of the second world war as “jobs for all after the war” was transformed over the next five years into the imperative of economic growth in accordance with the theory that growth was needed to maintain full employment in a technologically-advancing economy. 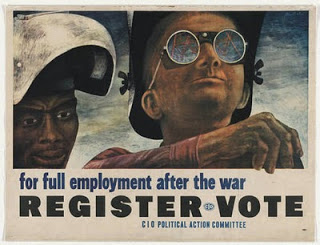 As Malm points out, though, “an economy of self-sustaining growth [is] predicated on the growing consumption of fossil fuels.” (Not, of course, some ‘hypothetical’ economy but any and all actually-existing economies.) There is no question of eco-technological fine-tuning. Malm is unequivocal:

The tradition of the dead is breathing down the necks of the living, leaving them with two choices: smash their way out of business-as-usual — and the heavier the breath, the more extreme the measures must be — or succumb to an accumulated, unbearable destiny. … The famed ‘window of opportunity’ for abolishing the fossil economy and stabilising climate within tolerable bounds — even returning it to safer conditions — is still there; if emissions were reduced to zero, the rise in temperatures would soon taper off.  Such an enterprise would have to stage a full-scale onslaught on the structural nightmares bequeathed by the past. It would be a revolution against history, an exodus, an escape from it in the last moment, and it would have to know what it has to struggle against.

The presumably unimaginable suddenly comes into focus as the only conceivable — and not unprecedented — way forward.

Sorel’s theory of myth distinguishes between “intellectualist philosophy” and the inner depths of emotional experience that “are not descriptions of things but expressions of a will to act.” Fundamental to his theory is a thoroughgoing pessimism — not the disappointed hope of the optimist but an apprehension and conviction of the intransigence of social conditions such that they “can only disappear through a catastrophe which involves the whole.” For the pessimist, then, the “path towards deliverance” entails “many heroic acts,” “courageous propaganda” and “considerable moral progress,” none of which sacrifices could be motivated by a dispassionate analysis of facts. It thus became evident to Sorel that:

…men who are participating in great social movements always picture their coming action in the form of images of battle in which their cause is certain to triumph. I proposed to give the name of ‘myths’ to these constructions, knowledge of which is so important for historians: the general strike of the syndicalists and Marx’s catastrophic revolution are such myths.

The pertinence of Sorel’s pessimism is illustrated by the feeble “if only” post-election retrospectives of Democrats and their social democratic critics. If only the result could be overturned by a recount or principled defection of electors. If only Bernie Sanders had been the nominee — or if only he had not damaged Hillary Clinton by challenging her in the primaries. If only the FBI had honored traditional protocols about disclosing information in the climax of a campaign — or if only they had disclosed information about foreign interference, too. If only the media hadn’t given Trump billions of dollars worth of free publicity…

The truth, though, is that even if Bernie Sanders had been the Democratic Party nominee and even if  he won a landslide victory along with majorities in both houses of congress — Sanders, like Syriza in Greece, would have been forced to yield before the threat of a general strike of capital. The corrosive effect on political democracy of the perpetual threat of capitalist general strike makes preparation of the proletarian general strike the only path to deliverance from plutocracy and ecological catastrophe.