In his neo-Confederate “Mein Kampf,” Whither Solid South, Charles Wallace Collins quoted a full paragraph from Hayek’s The Road to Serfdom regarding the emptying out of the meaning of words.

My instinct would be not to condemn Hayek for the politics of those who quote him. Even the Devil quotes Shakespeare.

But after taking another look at the Look magazine comic book edition of Hayek’s tome, I realized that Collins’s depiction of full employment as a sinister Stalinist plot was, after all, remarkably faithful to the comic-book version of Hayek’s argument. With only a little digging, one can readily infer that what the comic book refers to as “The Plan” is a policy also known as full employment (or, if you want to get specific, William Beveridge’s Full Employment in a Free Society). “Planners” translates as cartoon Hayek’s alias for Keynesian economists and their political acolytes. 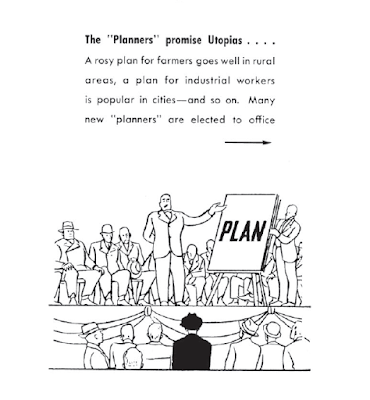 To be sure, Hayek’s sole reference to full employment in the book is unobjectionable — even estimable… almost:

That no single purpose must be allowed in peace to have absolute preference over all others applies even to the one aim which everybody now agrees comes in the front rank: the conquest of unemployment. There can be no doubt that this must be the goal of our greatest endeavour; even so, it does not mean that such an aim should be allowed to dominate us to the exclusion of everything else, that, as the glib phrase runs, it must be accomplished “at any price”. It is, in fact, in this field that the fascination of vague but popular phrases like “full employment” may well lead to extremely short-sighted measures, and where the categorical and irresponsible “it must be done at all cost” of the single-minded idealist is likely to do the greatest harm.

Yes, single-minded pursuit at all costs of any nebulous objective will no doubt be short-sighted and possibly harmful. But is that really what “the planners” were advocating?

Hayek elaborated his views on full employment policy in a 1945 review of Beveridge’s Full Employment in a Free Society, in which he glibly characterized Keynes’s theory of employment as “all that was needed to maintain employment permanently at a maximum was to secure an adequate volume of spending of some kind.”

Beveridge, Hayek confided, was “an out-and-out planner” who proposed to deal with the difficulty of fluctuating private investment “by abolishing private investment as we knew it.” You see, single-minded pursuit of any nebulous objective will likely be short-sighted and even harmful unless that objective is the preservation of the accustomed liberties of the owners of private property, in which case it must be done at all cost!

Further insight into Hayek’s objection to Keynesian full-employment policy can be found in The Constitution of Liberty. The problem with full employment is those damn unions. On this matter, he quoted Jacob Viner with approval:

The sixty-four dollar question with respect to the relations between unemployment and full employment policy is what to do if a policy to guarantee full employment leads to chronic upward pressure on money wages through the operation of collective bargaining.

…it is a matter of serious concern whether under modern conditions, even in a socialist country if it adheres to democratic political procedures, employment can always be maintained at a high level without recourse to inflation, overt or disguised, or if maintained whether it will not itself induce an inflationary wage spiral through the operation of collective bargaining…

Sharing Viner’s anxiety about those damn unions inducing an inflationary wage spiral “through the operation of collective bargaining” was Professor W, H, Hutt, author of the Theory of Collective Bargaining, who “[s]hortly after the General Theory appeared… argued that it was a specific for inflation.”

Hutt, whose earlier book on collective bargaining “analysed [and heralded] the position of the Classical economists on the relation between unions and wage determination,” had his own plan for full employment. It appeared in The South African Journal of Economics in September, 1945 under the title “Full Employment and the Future of Industry.” I am posting a large excerpt from Hutt’s eccentric full employment “plan” here because it makes explicit principles that are tacit in the neo-liberal pursuit of “non-inflationary growth”:

Full employment and a prosperous industry might yet be achieved if what I propose to call the three “basic principles of employment” determine our planning.

The first basic principle is as follows. Productive resources of all kinds, including labour, can be fully employed when the prices of the services they render are sufficiently low to enable the people’s existing purchasing power to absorb the full flow of the product.

To this must be added the second basic principle of employment. When the prices of productive service have been thus adjusted to permit full employment, the flow of purchasing power, in the form of wages and the return to property is maximised.

The assertion that unemployment is “voluntary” and can be cured by reducing wages is the classical assumption that Keynes challenged in the theory of unemployment. Hutt’s second principle, that full employment, achieved by wage cuts, will maximize the total of wages, profit and rent thus would be not be likely to command “more or less universal assent,” as Hutt claimed. But even if it did, Hutt’s stress on maximizing a total, regardless of distribution of that total between wages and profits, is peculiar. Why would workers be eager to work more hours for less pay just to generate higher profits? Hutt’s principles could only gain “more or less universal assent” if they were sufficiently opaque that no one could figure out what he was getting at, which Hutt’s subsequent exposition makes highly unlikely.

Hutt’s proposed full employment plan consisted of extending the hours of work, postponing retirement and encouraging married women to stay in the work force. He advertised his idea as a reverse lump-of-labor strategy. Instead of insisting — as contemporary economists do — that immigrants (older workers, automation or imports) don’t take jobs, Hutt boasted they create jobs, specifically because they keep wages sufficiently low and thus maximize total returns to property and wages combined. He may have been wrong but he was consistent. Nor did he conceal his antagonism toward trade unions and collective bargaining behind hollow platitudes about inclusive growth.

The U.S. has been following Hutt-like policies for decades now and the results are in:

For the 117 million U.S. adults in the bottom half of the income distribution, growth has been non-existent for a generation while at the top of the ladder it has been extraordinarily strong.

Or perhaps Hutt was right and what has held back those at the bottom of the income distribution is that wages have not been sufficiently low to insure full employment and thus to maximize total returns to labor and capital. The incontestable thing about Hutt’s theory is that no matter how low wages go, it will always be possible to claim that they didn’t go sufficiently low enough to enable people’s purchasing power to absorb the full flow of their services. 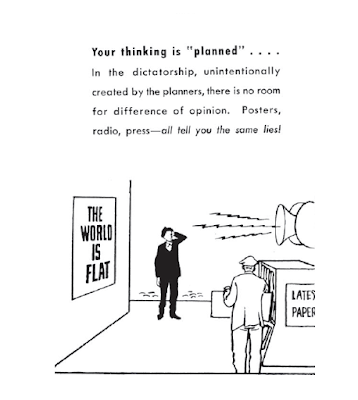