The Great Growth Target Leak of 1961 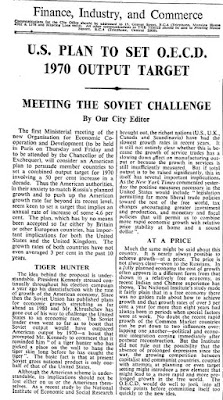 Oddly enough, it was not generals who were at the forefront of strategic thinking but academics like Henry Kissinger, Herman Kahn, Thomas Schelling and Daniel Ellsberg. Meanwhile, liberal politicians had concluded that the economy was too important to be left to the economists — let alone to the unscripted dealings of consumers and producers. Soon after Kennedy’s inauguration, signs appeared in the Commerce Department asking, “What have you done for growth today?” [implicitly: ask not what growth can do for you…]

The American proposal of a coordinated decade growth target for the countries in the newly formed Organization for Economic Coordination and Development was controversial. The Secretary-General of the OECD, Thorkil Kristensen, the British, Canadian and Belgian delegations were skeptical. There had even been doubt raised in the U.S. Treasury Department about “the focus on GNP as a measure for progress and the propaganda value of a target below an unrealistic average growth rate of 5 percent annually” (Schmelzer, p. 175).
Nevertheless, the U.S. delegation was determined to announce an OECD growth target as a riposte to the Soviet Party Congress’s grandiose plans announced for 1970 and 1980. Somehow the proposal and opposition to it were leaked to the press. The Americans were widely suspected. As Matthias Schmelzer details The Hegemony of Growth (2016), the leak changed “the entire dynamic of this discussion”:

The entire dynamic of this discussion suddenly changed when OECD bureaucrats and delegates learned that immediately before the MCM [ministerial meeting] the US proposal to set a growth target had leaked to the press. First in the New York Times and then around the world, newspapers were analyzing the viability and hidden motives of the target and reported on the different views on the proposal among OECD member countries. In all articles the initiative was interpreted as a direct response to Khrushchev’s announcements, an allegation the US delegation denied. The press was generally skeptical, in particular in Europe, and argued that the proposal was unrealistic. Characteristically, the German business daily Handelsblatt stated that member states did “not at all command the necessary economic policy instruments to force onto their industry and agriculture a specific growth rate.” Furthermore, there was some fundamental critique. For example, John Allen complained in the Christian Science Monitor that the growth target set by the OECD could not be achieved because the US had “grown nearest the top of the tree.” Arguing that the richest nations have “the ‘worst’ growth rates” and that for America and Britain growth rates were bound to decline, he stated: “The United States already has run a race and won. It does not have to accept the challenge to the same race over again, against a fresh runner.” Instead, the US should focus on improving the quality of education and housing, on alleviating poverty, and aim “to lift the underdeveloped countries up to Western standards.” Irrespective of these more nuanced critiques, the prior leak of the US plans put immense pressure on OECD ministers. Although it was not stated explicitly in the debates, at least the German delegation seems to have interpreted the leak as an intentional act of the US delegation to get agreement on its “propagandistic” target. At the meeting the German Economics Minister Ludwig Erhard accordingly complained that it was “improper that Ministers should read in the newspapers of the previous day and the day before what they were to decide that day.”

It is interesting to note that within all the extensive discussions among OECD experts and the key economists from member countries, the idea that a distinction could be made between absolute and relative growth numbers, between the size of an increase of the economy and the rate of increase, had not been brought up. Although no one expected the US and Britain to grow at the same rate as Italy or Japan due to the possibilities for catch-up, the shared assumption was that given the right policies growth rates could be stabilized between 4 and 5 percent annually for all countries, irrespective how rich they were and how large their economies had already grown. The growth rate dominated economic policy debates in the 1960s, exponentiality was the implicit ideal, not linearity.

So that is how co-ordinated growth targeting first leapt onto the world stage — as a panacea propaganda stunt without the technical know-how for accurate forecasting, targeting or policy selection to meet the targets. By happenstance, the OECD countries came close to meeting their joint 1960s growth target. The econometric analysis and policy prescriptions came as an afterthought.

In terms of enshrining the hegemony of economic growth as a policy imperative, the OECD growth targeting has to be judged a success. What that means in terms of global financial stability, the demise of the Bretton Woods system, environmental and social impacts is another question. But what struck me as I was reading Schmelzer’s documentary account the 1961 decision is how much the concept of greenhouse gas emissions reduction targeting mimics the American proposal for economic growth targeting. This is not a good sign.
Comments (11) | Digg Facebook Twitter |
11 Comments