Would the real "real median household income" please stand up?

Let me point out initially what real median household income is NOT.  It is NOT real wages.  Real median household income is compiled by the Census Bureau for all households headed by a person age 16 or older. NOT just wage/salary earners. Households consisting of two retirees are included.  Households headed by somebody in college are included. Households headed by one or two unemployed person are included.  So, real median household income does not tell you what is happening with salaries and wages. It is in no way “proof” that real wages and salaries have been declining. In fact, real wages and salaries have been essentially stagnant since the turn of the Millennium.  Rather, calulated from the monthly housheold jobs survey (more on that below) it tracks pretty closely with real median weekly wages adjusted for the employment to population ratio, as shown in the graph below that was created for me by Doug Short (I am using several more of his graphs later on in this post as well): 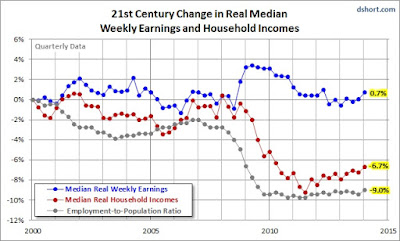 First off, here ere is median annual real household income as calculated by the Census Bureau, based on the data series Income and Poverty in the United States. It was last updated in August 2015 for 2014: 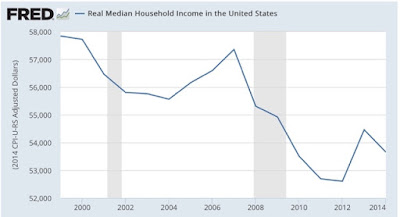 The data in this report are from the 2015 Current Population Survey (CPS) Annual Social and Economic Supplement (ASEC).  It shows median income declining through 2012, and then either an anomalous big increase in 2013 or an anomalous decrease in 2014.

One problem with this series is that it does not adjust for demographics, in particular the burgeoning increase in households of retired people.  A clearer picture emerges when we divide households by age groups.  The graph below, by Doug Short, superbly shows this breakout, and note especially the approximately 50% decline in income for the retired age cohort: 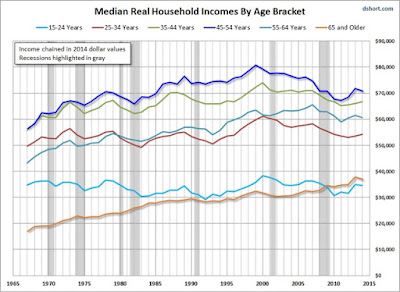 While median income for all households, and for prime working age households between ages 25 and 54, peaked in 1999, income for households between ages 55 and 64 has gone essentially sideways, and income for households 65 and over has continued to increase!  While the typical internet explanation – people can’t afford to retire – has some merit,  the fact is that the older cohort is rising more than the relatively younger 55-64 cohort, and the increase is in long standing.  The primary reason turns out to be the major increase in healthy longevity that caused the labor force participation rate for older people to start to increase in the mid-1980s, and to continue to increase even during the excellent economy of the late 1990s.

Which brings us to the second measure of real median household income.  This comes from thestudy released by the Pew Foundation a month ago.  The Pew measure is confined to the age group 20 to 60 years old, and is drawn from the Bureau of Labor Statistics’ Consumer Expenditure Survey: 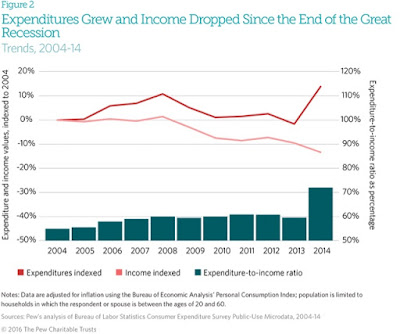 According to this graph, as the recovery began, median household expenditures returned to pre-crisis levels, but median household income continued to contract. By 2014, median income had fallen by 13 percent from 2004 levels, while expenditures had increased by nearly 14 percent. Unlike the Census Bureaus’s report on income and poverty shown in the first graph, there is no increase in either 2013 or 2014.

I am sure that the Pew Foundation accurately represented the data from the CES, but it is nevertheless troubling: despite the fact that employment was increasing, unemployment decreasing, and the labor force participation rate basically stable from 2012-14, the graph showed a continued decline in median household income among prime age workers.
Finally, here is median household income as calculated monthly trhough February by Sentier Research, making use of microdata from the monthly Household jobs report, from the Current Population survey: 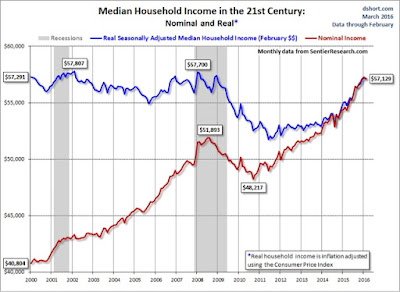 Unlike either of the two ofther measures, the CPS microdata used by Sentier shows that real median household income bottomed in 2011 and 2012, and has increased every year since – and almost completely recovered its Great Recession loss by the end of 2015.
The sad fact is, one or more of these metrics, all supposedly showing the same thing, is simply not correct.   Have real median household incomes relentlessly fallen since the Great Recession, or did they start to rise in 2013, before having a relapse in 2014?  Or did they continue to rise since 2012, making back almost all of their ground by the end of 2015?  I think there is persuasive evidence that one of the three metrics is giving a better picture, and I will explore this further in a subsequent post,

One thing that seems very clear is that the CES data is simply telling a  different story about the exact same statistic as the CPS data.  Even though the Pew study is limited to working age households, it simply does not accord with the demographic breakout by Doug Short of the annual Income and Poverty study, nor is it consistent with the Sentier data from the CPS.  And although the Income and Poverty study deflates by PCS rather than CPI, should it really give that different a result?  And then there are the odd, anomalous results of 2013 and 2014 in both the Pew and Income and Poverty reports.

The bottom line is, this is too important a statistic to leave to very delayed and problematic annual measures. An even more complete measure, average per capita adjusted gross income – which is generated from the complete tally of all tax returns filed in any given year, is only available through 2013!  Resources  should be devoted to producing more accurate and timely measures on a Quarterly basis at least.