Dan here:   NDd has agreed to post to Angry Bear and make use of the expanded topics that AB offers as well.  I will be adding his name to our roster and make an introduction, although many are familiar with his writing.

Tomorrow just about every data point in the world will be reported … but while we are waiting, here is an important story that will particularly be of interest to our progressive readers.

A study by the Pew Foundation shows that rents are killing lower income households. Oddly, it hasn’t been picked up by progressive blogs.  I came across the study by way of Mike Shedlock, who claimed that it shows that consumers haven’t been spending any of their gas savings.  Ummm, actually, no, since the first thing that Pew tells us is that

Expenditures are a key but often overlooked element of family balance sheets. ….  [T]his chartbook uses the Bureau of Labor Statistics’ Consumer Expenditure Survey to explore household expenditures, examining changes in overall spending and across individual categories from 1996 to 2014.

Since gas prices only started their big decline late in 2014, actually the Pew study tells us absolutely zero about what consumers have done with their gas savings in 2015 and 2016.  But I digress.

Here is the overall summary graph from the Pew Foundation: 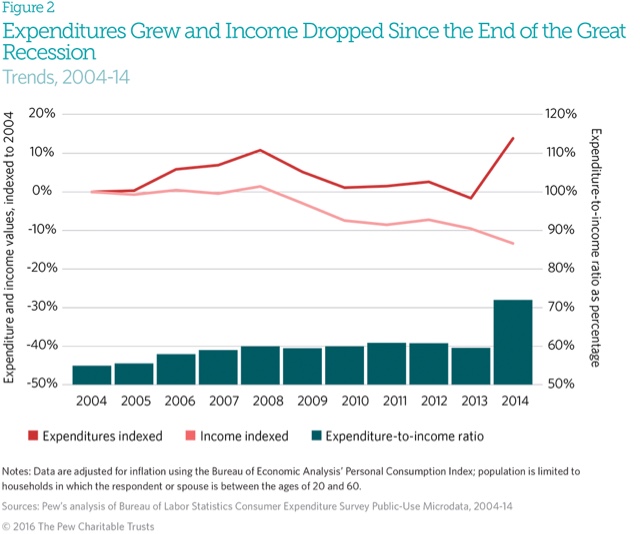 More important is the breakdown in expenses of shelter, transportation, food, and healthcare costs that Pew finds contributed the  most to the increase in household expenditures. 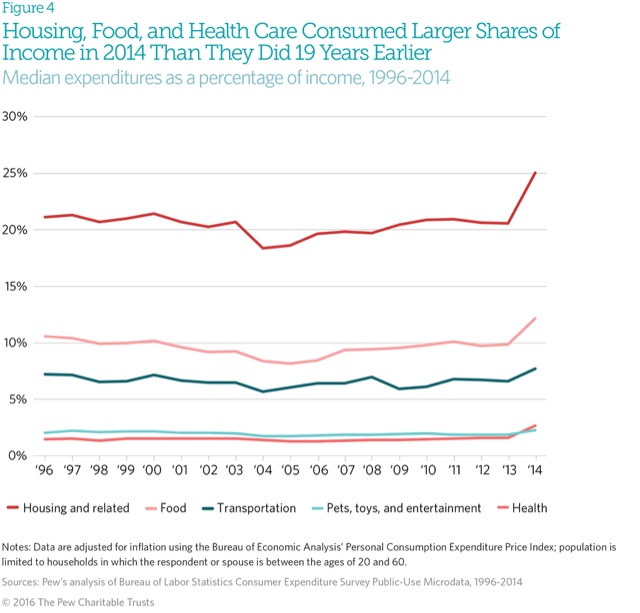 Notice two things in particular about this graph.  First of all, from 2004 through 2013 there are slow increases in housing, transportation, food, and healthcare.  Secondly, there was a spike in at least 3 of the 4 series in 2014, accounting for the lion’s share of the entire two decade change!  I would love to know what that is all about (was there a quirk in the sample, or the data?).  Pew unfortunately doesn’t explain.  But by far the biggest spike, accounting for 5% of all household expenditures, was in housing.

A final graph shows that for lower income households, rents spiked in 2014 from just over 30% to just under 50% of their entire expenditures! 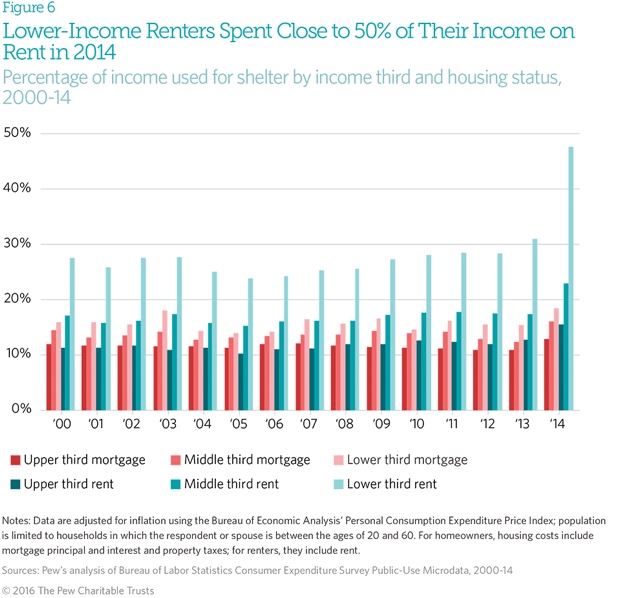 This is confirmed by the measure of median asking rent, compiled by the Census Bureau:

Note that rents have soared in the last few years, and made yet another all time record, even adjusted for inflation, in the last quarter of last year.  This even as wages for lower income jobs have actually declined in real terms since the recession.

Further, it is entirely rents that are driving the increase in inflation in the last few months.  Take out housing costs, and the CPI is almost exactly ZERO now, and has been negative for the last year: 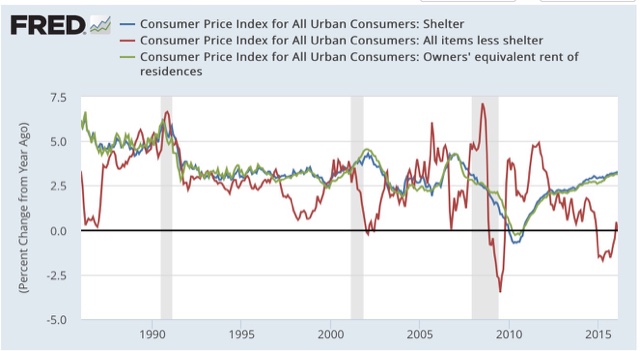 I do expect a big secular increase in the construction of new condominiums and apartments, because the return in profits, due to high rents, is so compelling.  But in the meantime, lower income households are getting absolutely clobbered by increased housing costs, and although the Pew study stops in 2014, it seems likely that at least some of the subdued increase in consumer spending we have seen since is because increased rents are soaking up some of consumers’ gas savings.