Why the Refuge Protestors May Have Been Right

In the past unions, facing company and governmental opposition to their demands have resorted to violence when they found peaceful protests did not work to gain recognition. Frustration on the part of union picketers with the appearance of strikebreakers, the delivery of materials, and the shipment of product eventually led to violent reaction. My own personal experience while attending a seminar in San Francisco found me in the midst of a hotel workers strike at the Sheraton on The Wharf. They were not a happy bunch and spent much time verbally abusing the help or scabs, as they called them, guiding us into the hotel. The hotel business continued and after the strike ended, the workers who stayed during the strike were let go. Either way, Labor paid.

Illegal and at times legal conduct by any protesting group almost always led to forceful retaliatory action by business, police and the military. The clashes sometimes led to injury and death with the employers, police, and government better equipped than the protestors and strikers. Under cover of the law, the actions of the police and government were just another vindication of employer rights and societal laws. Even in this environment, Labor prevailed. It has changed since those times when Labor was growing in influence. Labor and protesting success is on a downward slope losing ground in each confrontation whether legal or not. Legislatures continually nibble away at unions, worker, and protestor rights.

A Little History and Numbers

I did get in a discussion about the occupation of the Malheur National Wildlife Refuge. The history of the refuge and grazing, the diversion of water, the low grazing prices charged ranchers, and the over grazing of land in the early years is mostly correct. To take over a refuge and federal land, it is hard to understand why someone would risk life and limb to challenge the local authorities, the government, and the military. In any case, it is a sure recipe to lose, go to prison, or die when you challenge the authorities, are armed, and considered dangerous. One man did pay with his life and the rest are under restraint by the authorities. This short commentary is not so much an argument of whether their stance was right or wrong as much as whether it was worth it or the right one to make. By taking over the Refuge, I believe the protesting ranchers left the public with the wrong impression.

The domination of the beef production by the meat packers and retailers plus the failure of Government to react to it has increased the costs faced by smaller ranchers and contributed to the controversy of grazing rights. 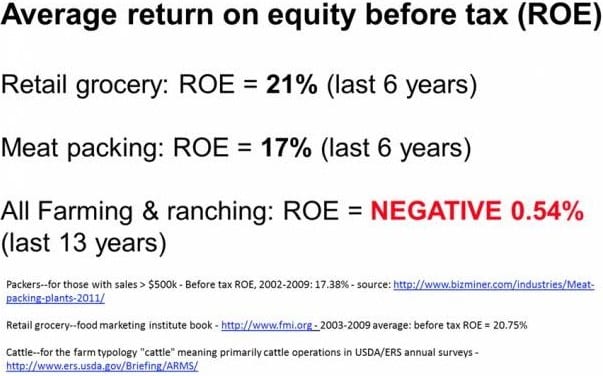 With the consolidation of meat packers and the rise of giant retailers such as WalMart, prices for bringing cattle to feed lots decreased forcing cattlemen to reduce cost. Two ways to reduce cost are increase the size of your herds which requires more land or increase the numbers of meat packers so no one meat packer can influence the market. Smaller ranches have higher costs in production over larger ranches result from the numbers of cattle brought to market. Fewer cattle to feed lots or markets result in higher costs per head. In my opinion, the argument should be made with the government about the consolidation of meat packer market. Grazing rights and the ownership of land by the Federal Government is not necessarily the right argument to make. Whether the Government can own or control land was decided by SCOTUS (Light vs. U. S. and U.S vs. Grimaud) years previous and after the Sagebrush wars when the Federal Government started to charge fees for access after land was designated as national parks.

“In 1990 and after a decade of mergers, 4 companies ‘slaughtered and packed 69 percent of US-grown cows’ as reported by University of Missouri rural sociologist Mary Hendrickson. The progress gained by independent ranchers from the passage of such bills as the Sherman Anti-Trust, Wilson’s Clayton, and Harding’s Packers and Stockyards Acts has deteriorated. Today, the top “four meatpacking companies control 82 percent of the beef market — an unprecedented share of the pie.”

The Issue for Small Ranchers

The issue of grazing comes up when smaller ranchers try to increase the size and volume of their operations to gain the economies of scale achieved by the already much larger manufacturing ranches and there is nowhere to do so except expand on to public lands. A small ranch of 20 to 49 head may have a cost of ~$1600/head as compared to ranch of 500 or more with a cost of ~$400/head. The larger the ranch and herd is, the more the spread of Labor and infrastructure cost. To grow your herd to lower the cost/head as determined by meat packers and retail giants, a rancher needs land. What was previously free, was leased to ranchers and the costs of leasing came into question as added burden as well as whether it was constitutional. 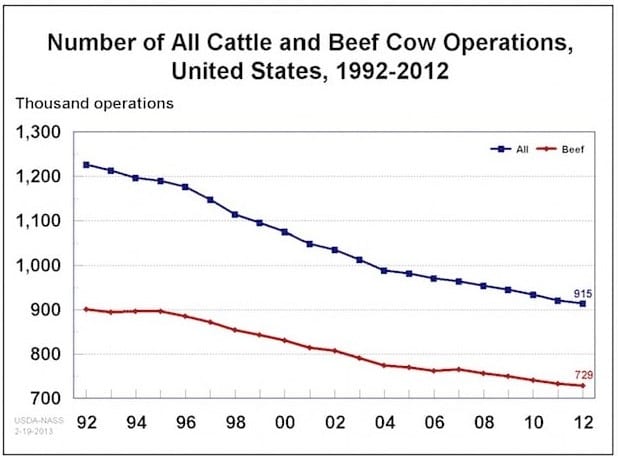 Pressure to reduce costs came into play. As meat packers scaled up their industry through buyouts and the addition of capital, retailers such as WalMart did the same through larger operations. Larger ranching operations meant lower cost per head and also per pound of meat. Cost pressure increased all the way down the processing line. Ranchers which could expand did so, and the rest either turned to boutique businesses, sold out, or went out of the meat business altogether. The alternatives were dire.

Even with the expansion of the ranches, the percentage of retail dollar going to ranchers continued to shrink. It was either scale up and continually lower costs or go out of the beef business. Thousands of ranches did either and still those left struggled to get by. To increase competition amongst ranchers, meat packers offered exclusive contacts to buy meat and added contests (increased prices) which promoted heavier chickens or cattle sold, etc . The problem was, no one monitored what the livestock was fed. The smaller ranches who could not compete in this environment disappeared from the market place. 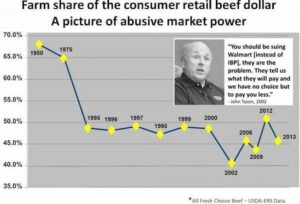 By policy, federal anti-trust regulators whose funding was cut by Congress, blocked by past administrations, or were pro-business mostly ignored the actions of companies using their market power to drive prices (oligopsonistic?) down. Similar tactics are employed by automotive OEMs who squeezed the supply base on pricing, inventory, payment terms (90 days and then late in payment), etc. If you do not like it, then you do not get the business to sustain yourself. Some Tier Ones such as Delphi, Yazaki, Lear have been able to fight back and then too some of the same (Delphi) have been forced to curtail their businesses through reorganization. The strategy also changed for antitrust regulators as New America Foundation’s Barry C. Lynn; points out; “since the era of Reagan, US antitrust regulators have focused almost exclusively on whether large companies use their market power to harm consumers by unfairly raising retail prices” and leaving small companies to fend for themselves.

What the Rancher’s Argument Should Have Been

What this strategy does is change the focus to “low pricing to consumers” (think China manufacturing of product) from competitive and fair business practices of meat packers and retailers in the market place. In other words, if it is low pricing to the customers, it has to be good. Well, past practices of such environments have shown it was not good in the end. Yes the consumer gets a low price; but it is fatal to small businesses and Labor by leaving a concentrated market controlled by a few corporations. Today, the meatpacking industry is controlled by 4 majors having >80% of the business. This type of concentration was largely put to rest in the past by the passage of Sherman Anti-Trust, Wilson’s Clayton, and Harding’s Packers and Stockyards Acts and the enforcement of these laws in the past until reinterpreted narrowly by Reagan’s DOJ. This practice hurt small farms and ranchers decades ago and in the end the consumer as competition is lessened.

This should have been the rancher’s argument. The take over of the Refuge was a distraction from the real issue faced by small ranchers and small businesses. It may have been a reaction of last resort; but, it was fatal to their cause.

What President Obama Tried To Do to Help Small Ranchers

After his election in 2008, President Obama took up the cause of independent farmers and ranchers against the excesses of meat packers. Starting with a series of 5 meetings with various farm groups representing cattle, hog and chicken farmers, the USDA who was charged with rewriting regulations and President Obama found themselves blocked by a Republican controlled House. While the Senate supported appropriations for the overall meat industry, the House went full out blocking food stamp and food safety programs. No one wanted to place the poor at risk. In December 2011, the USDA published 4 watered down regulations of which the only full strength regulation eliminated arbitration. In May 2012, the DOJ followed through with a report on the five 2010 meetings detailing a lack of competition. The DOJ went to state:

“It could not act to address these wrongs because, no matter how outrageous the conduct of the processing companies, their actions did not amount to “harm to competition” as defined by the current antitrust framework” which was skewed to protect consumers. Obstructionist Republicans in the House not only blocked any reform efforts but also any change to the law or USDA regulations and threatened budget cuts to the Department of Agriculture. It would be interesting to discover which Republicans blocked the reform efforts of Obama and the DOJ and came out in support of grazing rights for ranchers.

How the Administration’s Actions Harmed the Ranchers

The failure to succeed and subsequent silence gave further support to the “processing companies and they were now free to do whatever they wished to in the meat industry” knowing whatever they did would not be countered.

Furthermore, the raising of hopes and the backing of independent ranchers against big farming business interests frustrated the hopes of the independents who hoped for a fair shake in the open market. They were left again with few if any alternatives. Some gave up and others chose a more militant reaction forcing the administration to take action against the very ones they were seeking to help. And the Republicans, laughed at the moral failures of the administration.

The Oregon Militia Is Picking the Wrong Beef With the Feds Mother Jones, January, 2016