The other day I showed that there is compelling evidence that the primary reason for the long term decline in the Labor Force Participation Rate in the 25 – 54 age range is the increasing real cost of child care, coupled with stagnant to declining real wages in the lower paying jobs typically taken by the second earner in a two earner household.
Today I have a few more precise graphs, and discuss the implications for median household income and the issue of “shadow unemployment” or “missing workers.

First of all is a graph of the increase in the number of those aged 25-54 who are neither employed nor unemployed, but out of the labor force entirely: 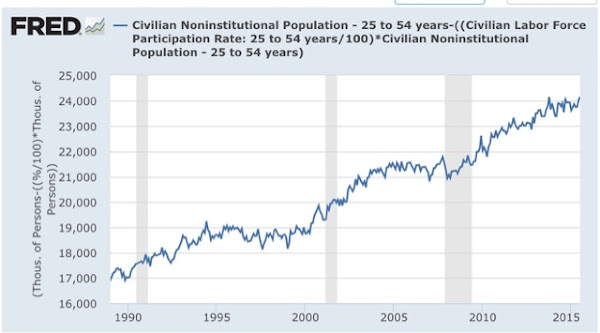 Unfortunately this is not avaiable on FRED, but via the BLS, here are the number of people in that above group who tell the Census Bureau each month that they want a job now: 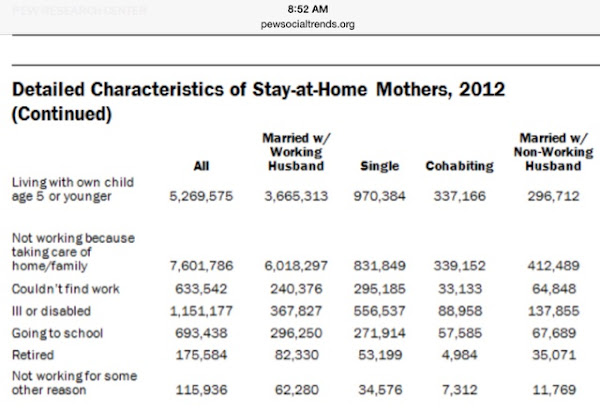 The Pew study found that as of 2012 the vast majority —  85% — of stay at home married mothers say the reason for not working is to take care of their children.  Note also that the number of women staying at home is much larger for age groups 25-54 than for those either young or older.  The only thing not making this the ultimate “smoking gun” supporting the child care cost crunch thesis is that the study makes no comparison with 1999. 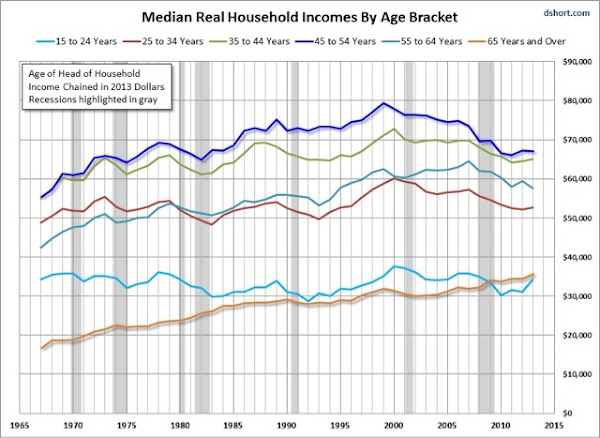 Aside from the unemployment rate, working age people dropping out of the labor force due to increasing child care costs is the most important reason for the failure of median household income to return to its level in 2000.  After all, giving up a second income necessarily means that the household’s income is less than otherwise.
Implications for “shadow unemployment”
Finally, here is a graph of what the Economic Policy Institute calls “missing workers:” 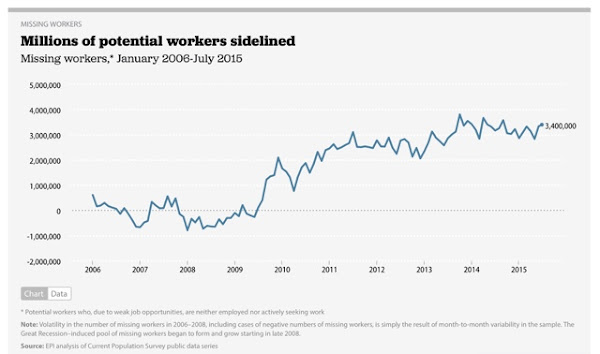 The EPI defines “missing workers” as

potential workers who, because of weak job opportunities, are neither employed nor actively seeking a job. In other words, these are people who would be either working or looking  for work if job opportunities were significantly stronger. Because jobless workers are only counted as unemployed if they are actively seeking work, these “missing workers” are not reflected in the unemployment rate.

Note that this has been rising since 2007, unlike virtually all other metrics.

I have been critical of this measure, which is based on projections from a 2006 Regional Fed study. The Census Bureau’s series “Not in Labor Force, Want a Job Now” measures exactly what the EPI claims to be calculating, and that peaked out about 4 years ago. To the point, parents who stay at home to raise their children and tell the Census Bureau month after month that they  quite simplydon’t want a job now are not “missing” from the unemployment rate.
But since increased wages, especially for lower quintile jobs, change the equation for families considering whether to have the second spouse work, i.e., increased real wages should result in more spouses opting to work, the Center’s “missing workers” statistic, including its continued slow rise, makes perfect sense if we describe it not as those who have dropped out of the work force, but would return if the job market was strong, but rather as those who would return to work if wages were better.

The effects of the child care cost crush not only unravel the mystery of the decline in the prime working age Labor Force Participation Rate, but it is also the missing piece in the puzzle of the similar secular decline in real median household income, and the rise in “missing workers.” Once we include these effects, almost all of the mysteries in current labor market statistics disappear.

What News was in My In-Box