Pricing is the ultimate miracle of Darwinian markets. Competitors who produce goods at lower prices thrive, expand their operations, and produce more. Those who charge higher prices (for equivalent goods) are driven to extinction when sensible purchasers abandon them for their more-efficient competitors. This inexorable mechanism drives innovation, investment, and productivity, and the eternal grinding evolutionary churn of “creative destruction.” Survival of the fittest makes us collectively fitter, and fills our wants and needs at ever-lower prices.

All of that, or course, requires price competition among producers. The ultimate bogeyman, choking that mechanism, is competitors colluding to fix their prices. If they agree not to compete with lower prices — collectively stealing higher profits from their customers — the pricing mechanism doesn’t exist, and its manifest benefits are denied us.

It’s a compelling and convincing story. But: The key word in that second paragraph is “agree.” It’s illegal, of course, for competing firms to explicitly collude to set higher prices. But price collusion occurs constantly at higher, institutional levels, where it is unstated, implicit…and profoundly pernicious.

The Economist highlights this reality in its recent package on family companies. We’re not talking mom-and-pop shops: this is about vast networks of corporations controlled and owned by small groups of families — especially common in Asia (South Korea!), but also in Europe. The small control groups at the top of these pyramids have every incentive to back off on price competition among their subsidiaries, reaping higher profits at the expense of their customers. And they have the wherewithal to do it:

A stylized diagram depicts the rather obvious mechanism for this control and collusion: 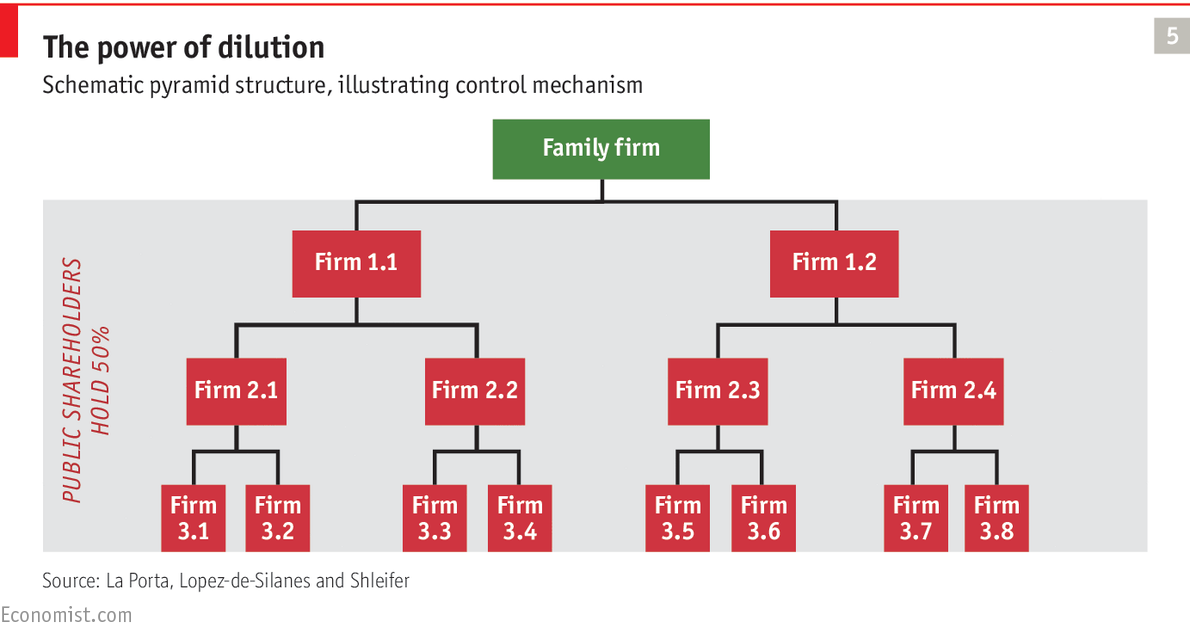 With all competitors controlled, ultimately, by a handful of actors, price collusion seems inevitable.

This problem is particularly marked in developing countries, but is also common in much of the rich world, except in the Anglo-Saxon sphere.

In America, we do things differently. In a recent Slate article, Eric Posner and E. Glen Weyl explain our innovative, fiendishly clever, and truly “exceptional” mechanism for pyramid control:

Mutual Funds’ Dark Side: Why airlines and other industries keep prices too high

They cite a paper by José Azar showing that:

We’ve all watched this airline-pricing scenario play out over recent months, with fuel costs plummeting while airfares remain unchanged.

If you’re like me, you’re immediately wondering: Really, how does the price-fixing actually happen? The answer isn’t terribly surprising, or far to find (emphasis mine):

How exactly might this work? It may be that managers of institutional investors put pressure on the managers of the companies that they own, demanding that they don’t try to undercut the prices of their competitors. If a mutual fund owns shares of United and Delta, and United and Delta are the only competitors on certain routes, then the mutual fund benefits if United and Delta refrain from price competition. The managers of United and Delta have no reason to resist such demands, as they, too, as shareholders of their own companies, benefit from the higher profits from price-squeezed passengers. Indeed, it is possible that managers of corporations don’t need to be told explicitly to overcharge passengers because they already know that it’s in their bosses’ interest, and hence their own. Institutional investors can also get the outcomes they want by structuring the compensation of managers in subtle ways. For example, they can reward managers based on the stock price of their own firms—rather than benchmarking pay against how well they perform compared with industry rivals—which discourages managers from competing with the rivals.

(This is right out of Chomsky’s Manufacturing Consent: media corporations control news content by hiring people who they know will deliver the content, and message, they want. Those who do so are promoted and rewarded. They don’t need to tell them explicitly what to write.)

In America, you don’t find the explicit, extreme, and obvious family-pyramid control that’s so apparent in some other parts of the world. Control and ownership is more widely distributed across perhaps a hundred or a thousand families at the top. (Before you object: it depends on how you define “family” and “the top.”) How could price collusion happen among this larger group, with the inevitable incentives for some to defect with lower prices and take market share from the others?

Simple: America’s richest families have farmed out their collusion to institutional entities who control markets (and market pricing), with small groups of institutions controlling all the players in each industry.

The Darwinian view that underpins the “free market” belief system reveals a fundamental misunderstanding of a key evolutionary mechanism: groups can thrive and propagate at the expense of other groups, if members of one group are better cooperators. That cooperation can take myriad forms (both beneficial and pernicious to the common weal), and there are myriad evolutionary mechanisms by which that cooperation can arise. However it arises, in the case of price-setting within groups, we call that cooperation “collusion.”

The agents operating those institutions know quite clearly which side their personal bread is buttered on. The families who ultimately own everything, meanwhile, are many stages removed from, largely unconscious of, any particular pricing decisions. But they can be confident that those decisions are being made in their families’ best interests.

Adam Smith, poster-boy for free-market enthusiasts, understood this reality better than most:

People of the same trade seldom meet together, even for merriment and diversion, but the conversation ends in a conspiracy against the public, or in some contrivance to raise prices.

He could not perhaps have conceived, however, how cleverly colluders would construct institutions that would achieve that price collusion, while masking and obscuring it even from their own eyes. He perceived the familiar “principal-agent” problem of joint-stock companies quite clearly:

The directors of such companies, however, being the managers rather of other people’s money than of their own, it cannot well be expected, that they should watch over it with the same anxious vigilance with which the partners in a private copartnery frequently watch over their own…. Negligence and profusion, therefore, must always prevail, more or less, in the management of the affairs of such a company.

But he didn’t perceive these institutions’ potential for price collusion.

America’s founders, on the other hand, displayed and expressed a far deeper distrust of limited-liability, joint-stock companies. Charters for such companies were uncommon and extremely restricted in their scope (building a particular public work, for instance) well into the 19th century. “Any legitimate business purpose” is a very recent innovation.

But there’s another crucial innovation: corporations owning shares in other corporations (the very crux of modern pyramid-control schemes, familial and institutional). This was not even legal under state corporate charters until late in the 1800s. The ill effects of that rule change were not long in coming, and had to be addressed vigorously via the trust-busting and rule changes of the early 1900s. (See: interlocking directorships and The Pujo Committee.)

Proponents of free markets seem unaware that that “peculiar institution” — corporations owning corporations — is in fact very peculiar indeed. It is arguably the most destructive innovation ever to strike at the miraculous wonder of the free market’s pricing mechanism.