This is my third post about the possibility of the Fed raising rates as early as June.

In the first post, I pointed out that both wage growth and inflation are at historic, half-century lows. Further, the heightened number of involuntary part-time employees and those who want a job now, but have completely given up looking, suggest additional slack as compared with other instances of 5.5% unemployment, There is not the slightest pressure on inflation from wages at present.

In the second post, I showed that since the turn of the Millennium that CPI inflation, ex-Oil, has never exceeded 3%, even with 4% unemployment or 4% YoY wage growth.  Further, it is likely that core inflation in the next 12 months will actually decrease somewhat as the collapse in oil prices feeds through the economy.

Now let’s look at the 21st century Phillips curve, i.e., the tradeoff between inflation and unemployment.

To begin with, the Phillips curve is regaining respectability as some economists (pdf) consider it is not a 2-dimensional curve, but a 3-dimensional foil, similar to this graph, which was the best visualization of the concept I could find: 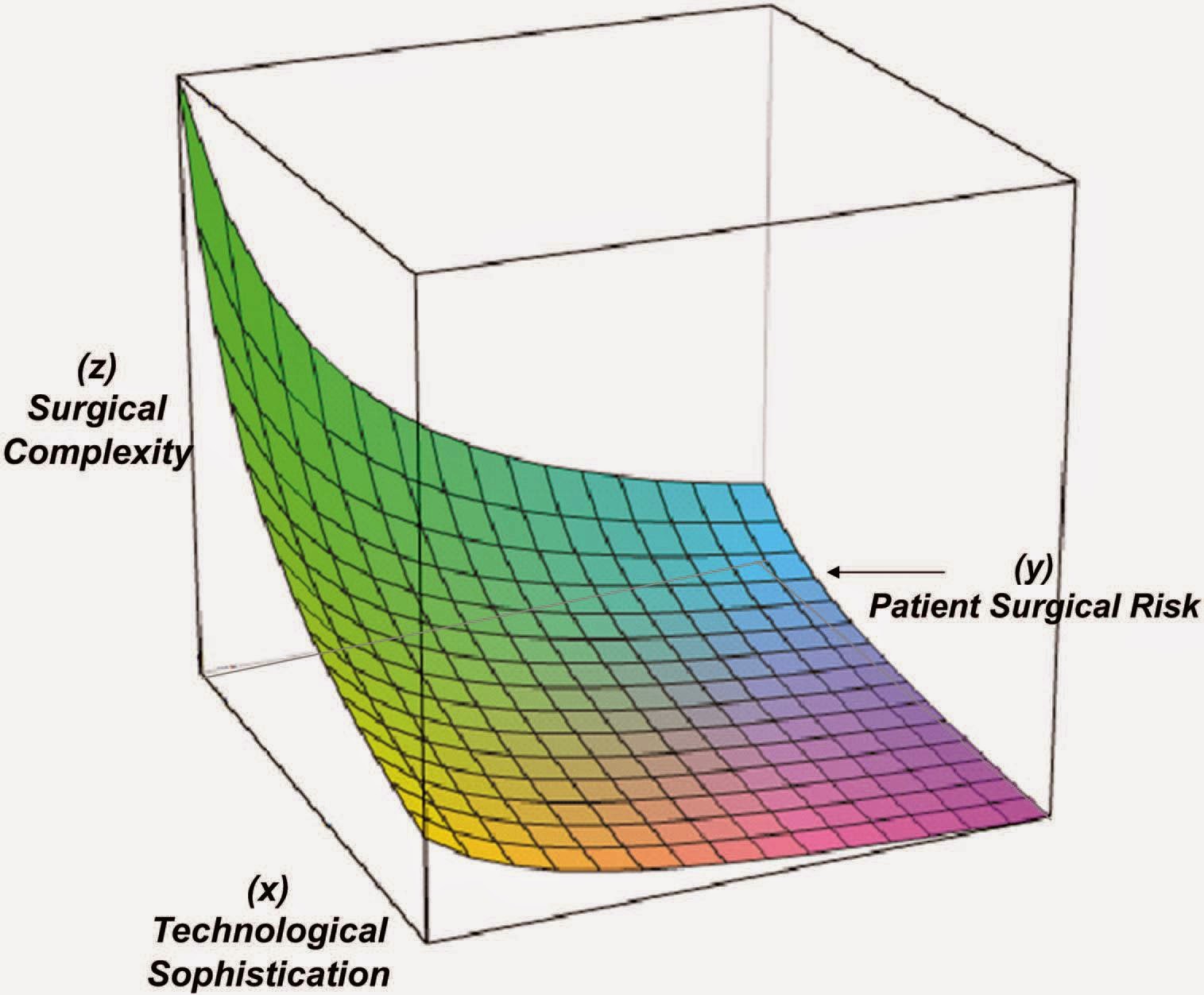 The insight is that labor is one of many commodity inputs.  A significant change in the cost of other commodities changes how much labor can be profitably employed. Thus the third dimension is  the cost of non-labor commodities, and in particular Oil.   An exogenous shock such as the 1974 Oil embargo, which suddenly and dramatically increased the price of a basic good, will shift the 2 dimensional Phillips curve along the third axis.

[Note:  I apologize for the non-uniformity of the graphs below. Some were prepared quite some time ago, under the “old” FRED. The new and allegedly “improved” FRED is considerably less functional. I traded uniformity for clarity of presentation.] 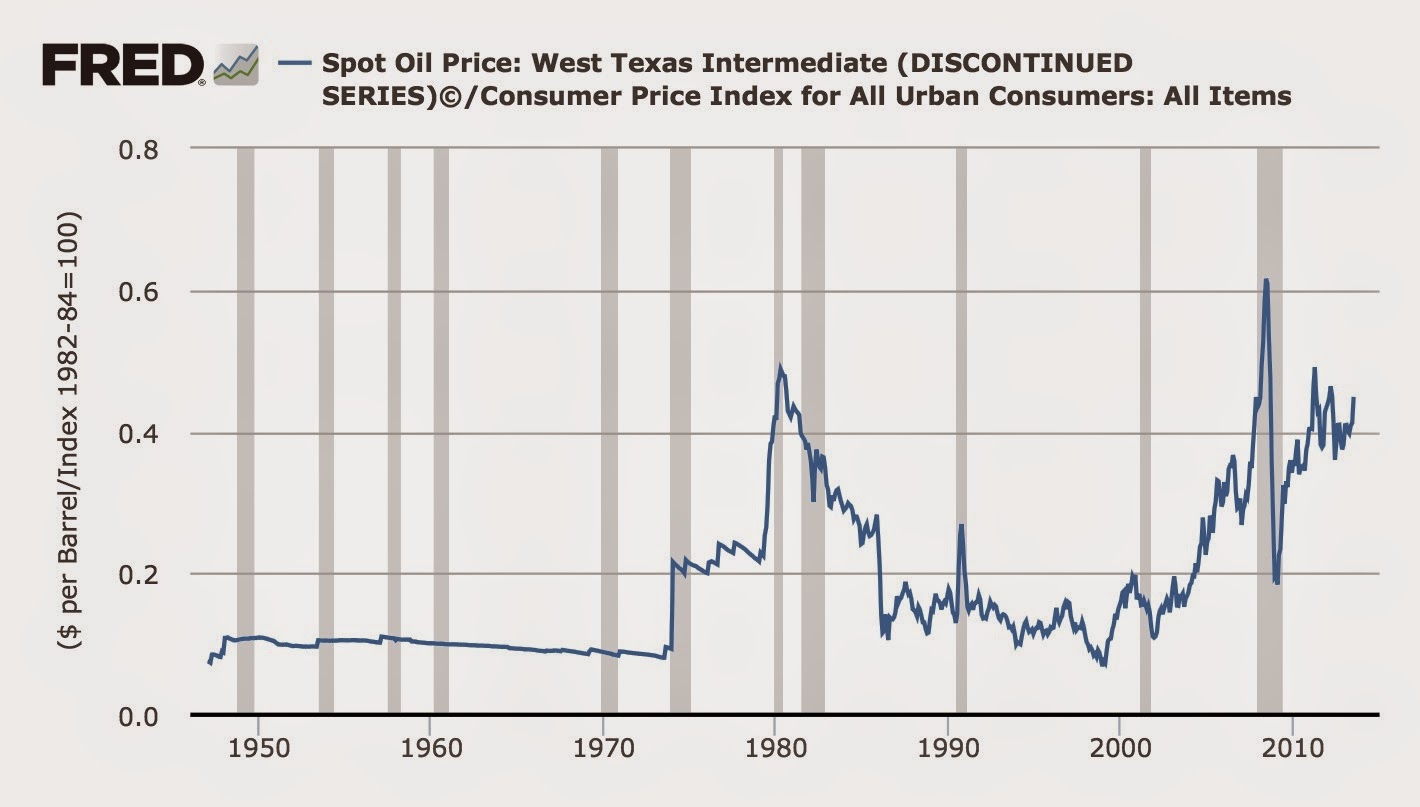 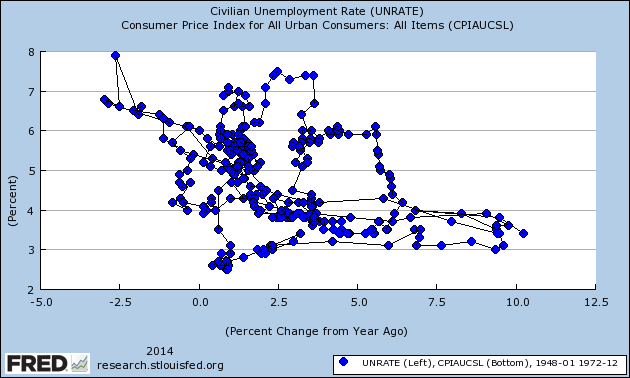 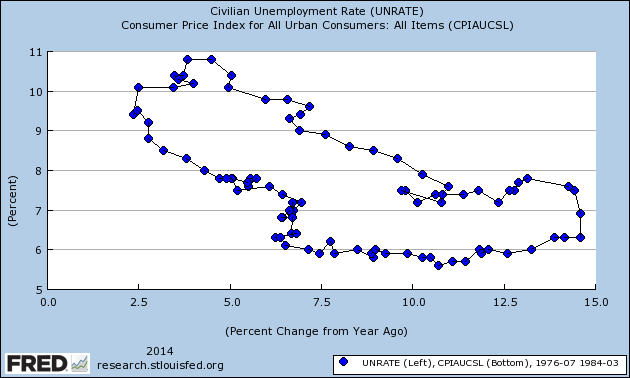 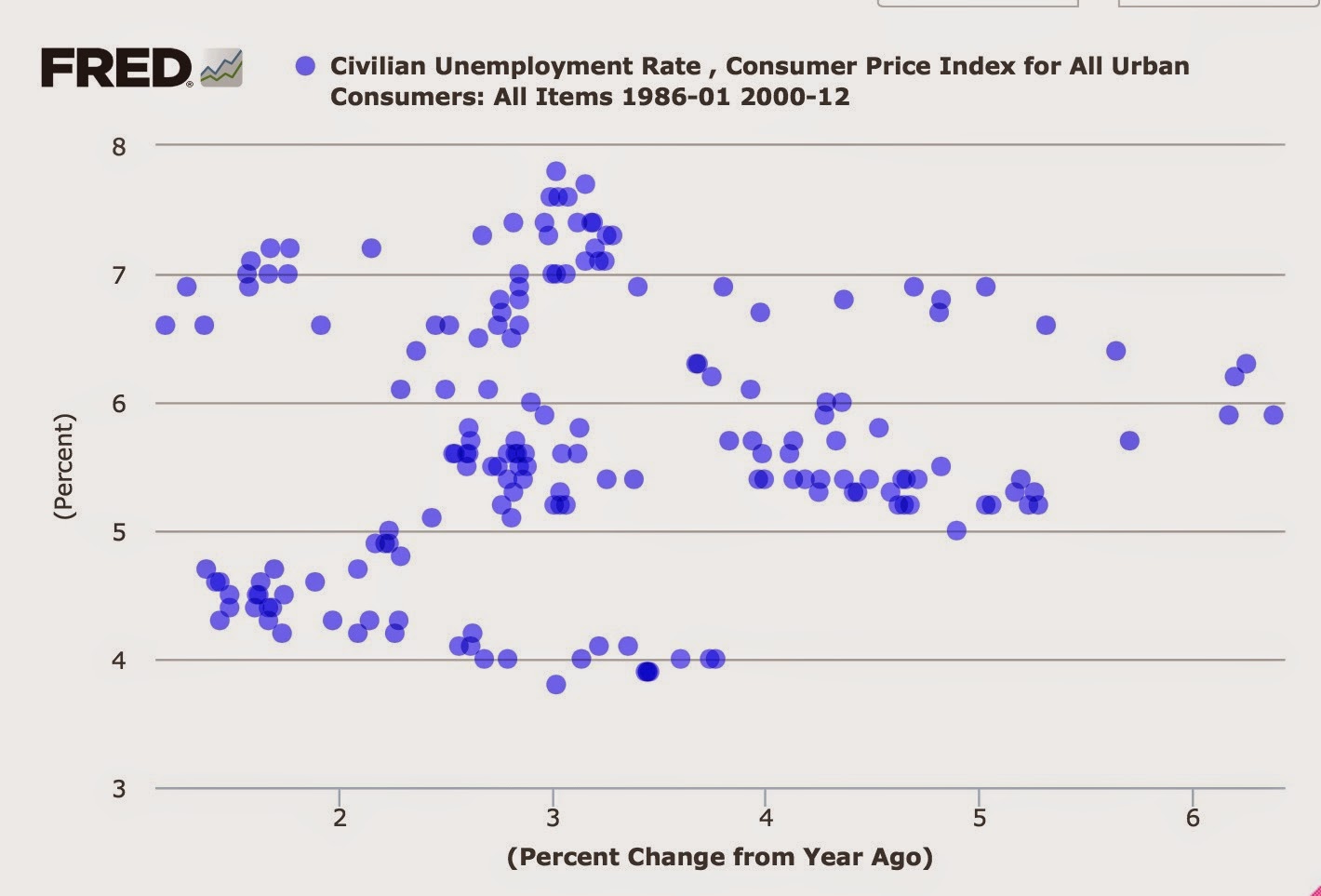 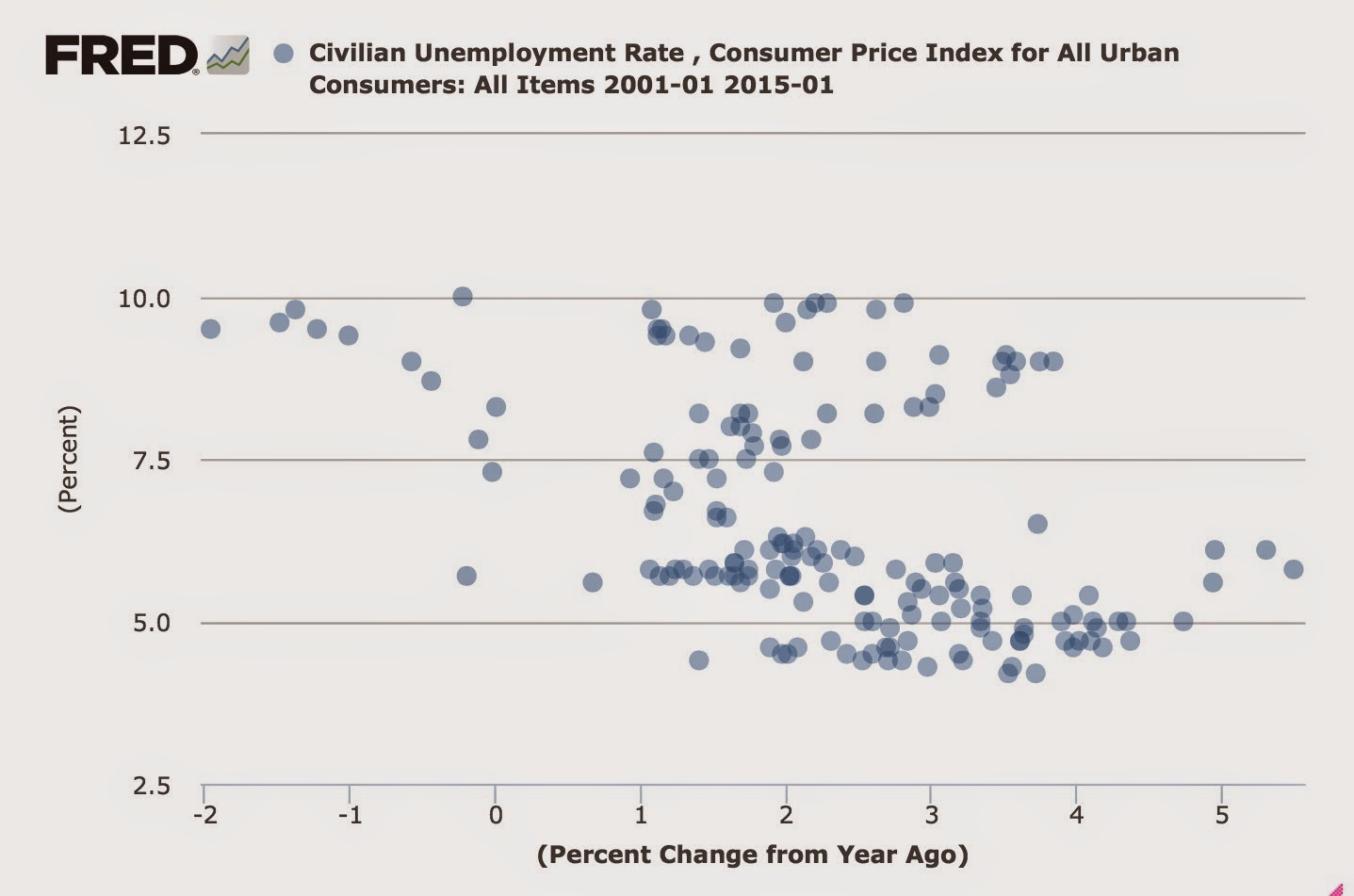 The Phillips curve has shifted upward and outward on the 3-dimensional foil during periods of high oil prices.

For the rest of this piece, I’m going to focus on the era of 2001-present.

As you can see from the final graph above, headline inflation has almost always exceeded the Fed’s 2% target in times of 5.5% unemployment or less.

But as I showed yesterday, ex-Oil inflation since 2001 has never gotten above 3%.  Here’s the Phillips curve for unemployment vs. CPI less energy: 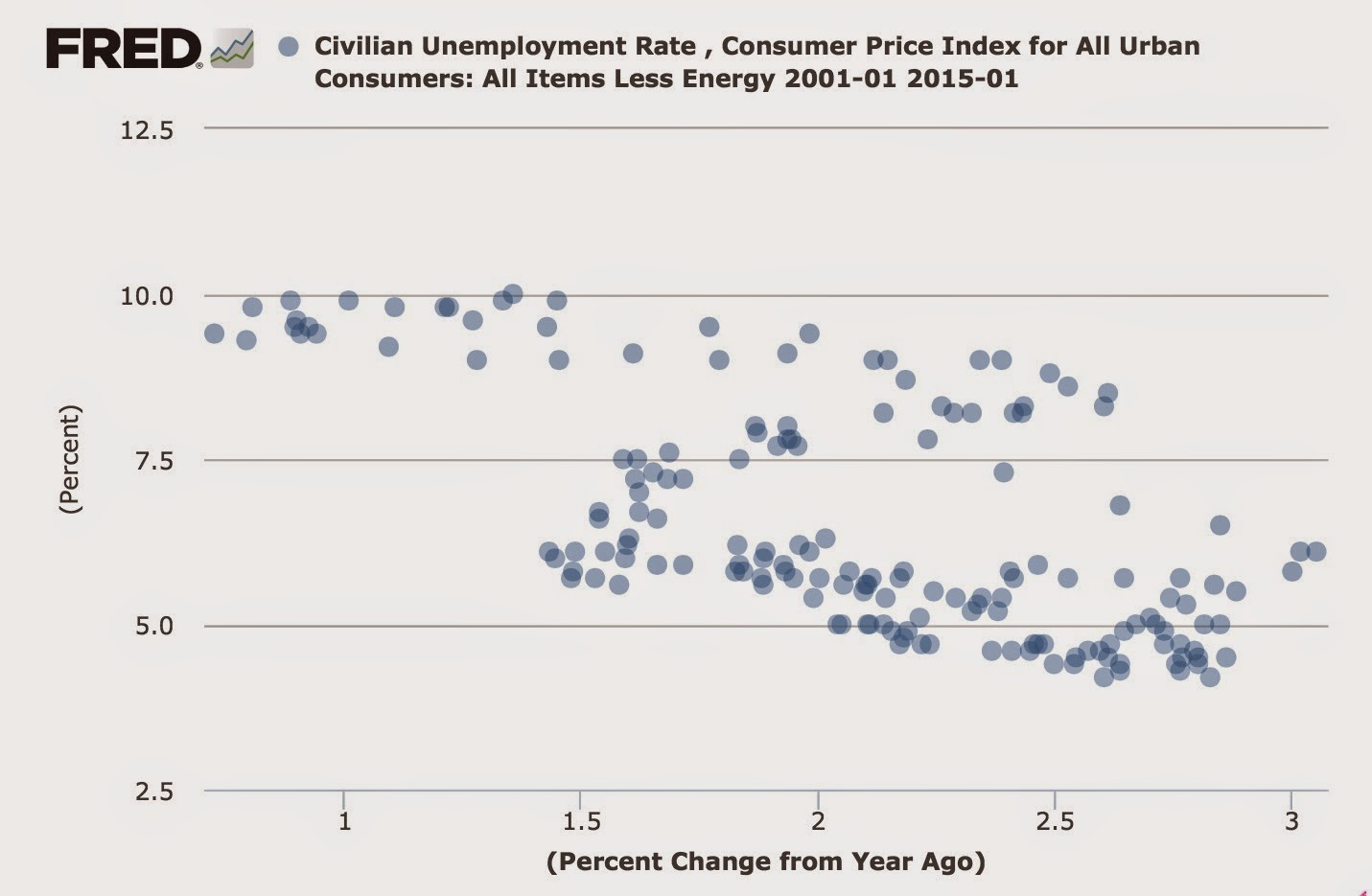 It’s still true that at 5.5% unemployment or less, CPI inflation ex-Oil is over 2%.  But at the absolute worst it is no more than 3%.

Finally, here is the Phillips curve of unemployment vs. core inflation. Craig Eyermann of Political Calculations graciously calculated a regression.  Note that the axes are reversed compared with previous graphs): 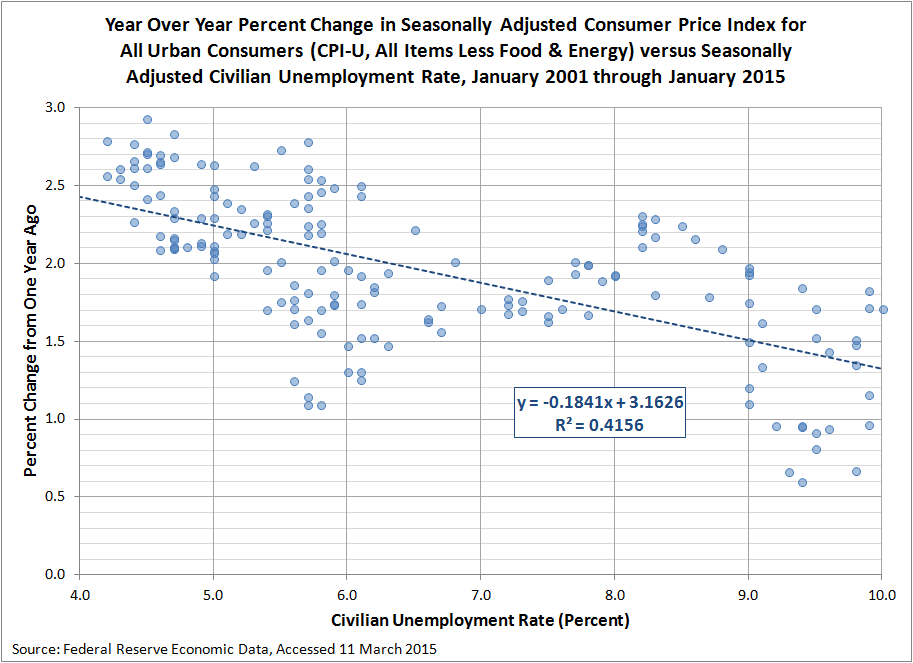 Similarly, the worst inflation is less than 3%, even at 4% unemployment.

Granted that under all 3 inflation calculations, since the year 2000 an unemployment rate under 5.5% has almost always correlated with an inflation rate in excess of 2%.  But even so, even if the unemployment rate should fall as low as 4%, the risk is that we overshoot 2% YoY CPI by less than 1%.

Further, if we have at least temporarily entered a period of low oil prices, then the Phillips curve should once again shift downward and to the left on the 3-dimensional foil, and there is evidence that it is already doing so, as shown in this graph zooming in on the last 5 years: 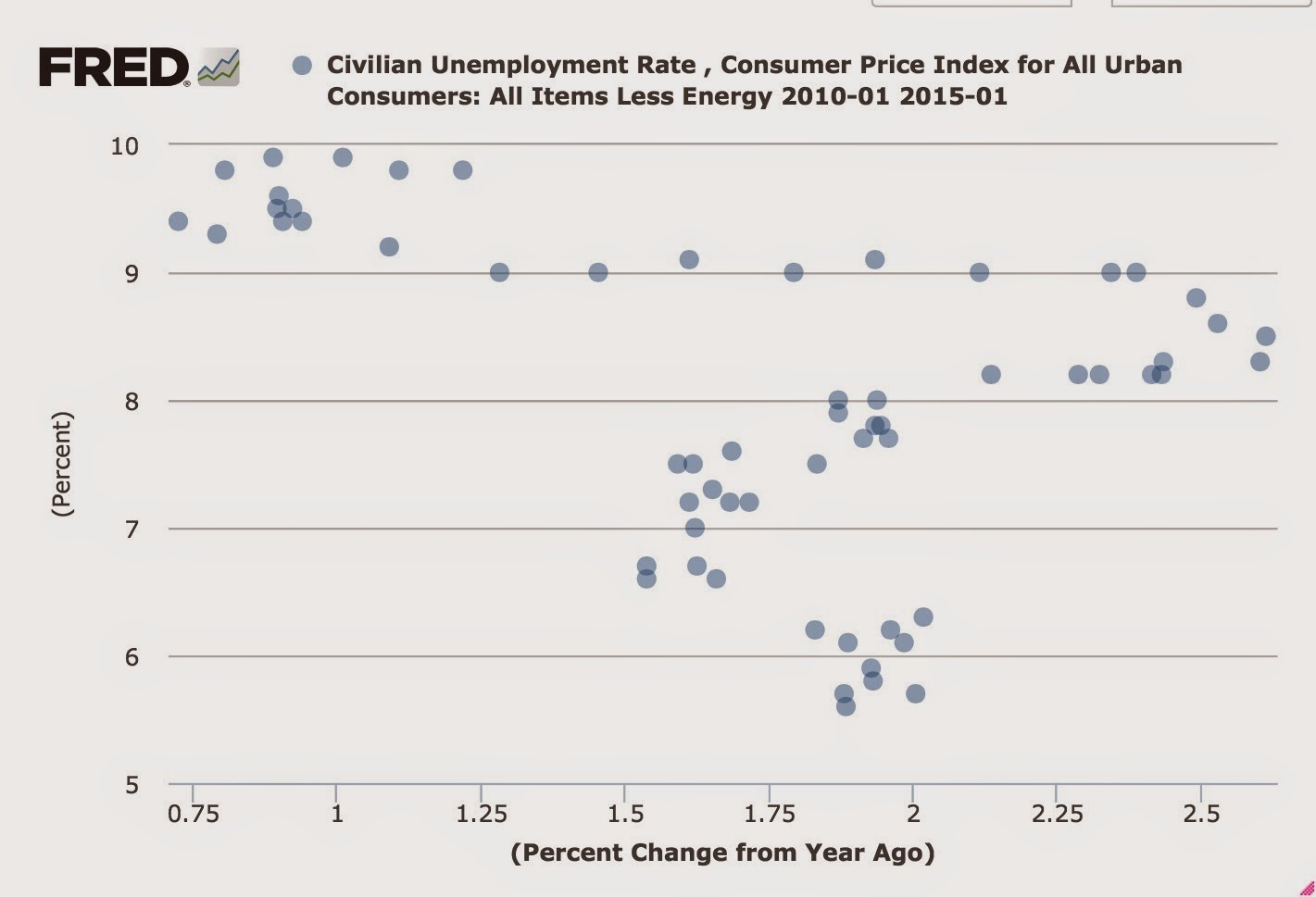 As Oil prices rose by 40% YoY in 2011-12, the inflation rate hit  3% even with high unemployment, but since then the Phillips curve has shifted downward and to the left as gas prices stabilized.  Further, note the two overlapping dots at 5.6-7% unemployment and 1.88% CPI less energy.  The Phillips curve is now shifting even further downward and to the left in response to the collapse in gas prices.  Thus, consistent with the late 1990s and the post WW-2 period, we could have as low as 4% unemployment without inflation exceeding 2%.

Considering we have just endured 5 of 6 years with inflation under the Fed’s target with subpar wages and high unemployment, the risk of a 1% overshoot — or possibly no overshoot at all! — hardly justifies tamping down on improvements to laborers.