(Dan here. NDD takes a shot at one reason for the loss of Democratic candidates in this election.)

You know the old saw, “it’s the economy, stupid!”  Both Robert Reich and Atrios have boiled last week’s election results down to that maxim.

Atrios said, “It isn’t really a big mystery why people still aren’t thrilled with the economy. The foreclosure crisis and the great recession destroyed lives, and opportunities for The Kids Today are pretty crap.”

If you want a single reason for why Democrats lost big on Election Day 2014 it’s this: Median household income continues to drop.This is the first “recovery” in memory when this has happened.Jobs are coming back but wages aren’t.

While I agree with his prescription:

[Democrats] have a choice.

They can refill their campaign coffers for 2016 by trying to raise even more money from big corporations, Wall Street, and wealthy individuals.

And hold their tongues about the economic slide of the majority, and the drowning of our democracy.  Or they can come out swinging.

I disagree about using the metric of median household income, since your 75 year old Uncle Earl and 85 year old grandma are counted in that statistic, and there are a ton more Uncle Earls and Grandmas than there used to be (more on that below); and among 25 to 54 year olds it tracks the employment to population ratio nicely.
While the lack of a platform that speaks to younger voters was certainly an issue, I believe almost all commentators have overlooked another crucial component of what happened last week — interest rates.
You’ve probably seen this graphic already from ABC news, showing the skew among age groups over the last 5 elections. Note that younger voters constituted 12% of the electorate in each of that last 3 midterms. 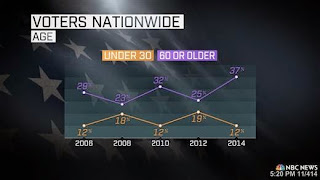 Now let’s look at how 18 year olds political orientation has changed over time: 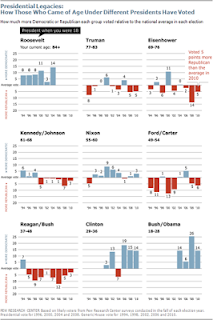 In 2006, there were still some FDR era voters around.  By yesterday, they had all but disappeared, replaced by an island of JFK era 18 year old blue voters amidst a red tide of Truman, Eisenhower, and LBJ voters.  In other words, the 65+ year old cohort that went to the polls in 2014 was the most conservative in several decades. (PS: Note that Obama turned 18 in very red 1979, which might not be a coincidence with his apparent veneration for Reagan).

And what do elderly voters care about?  It isn’t jobs, and it isn’t wages. After all, they are almost all retired!

No, what they care about is the interest rates their CD’s and money market accounts are earning, and the COLA adjustments to their Social Security.

And there, the news has been abysmal for the last 6 years. 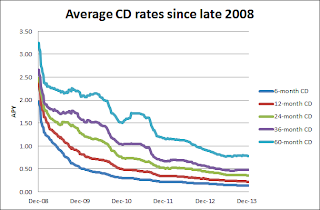 And here’s the COLA adjustment to Social Security in the last 6 years: 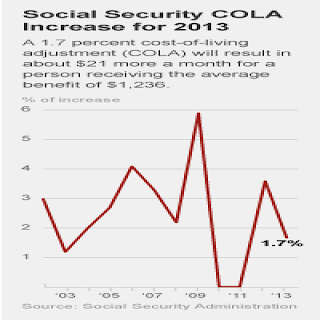 Average CD rates have run no higher than 1%.  Social Security COLA has averaged 2.2%.
Now here’s inflation (and keep in mind that there is evidence that seniors probably face higher inflation rates for what they buy): 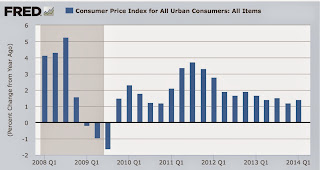 For the last 5 years, inflation has averaged about 2% a year.

Obama and the democrats are seen as having bailed out Wall Street in 2009.  Meanwhile savers and those on fixed incomes have taken it in the chops.

Last week, they got even.