Pavlina Tcherneva’s chart has been getting a lot of play out there: 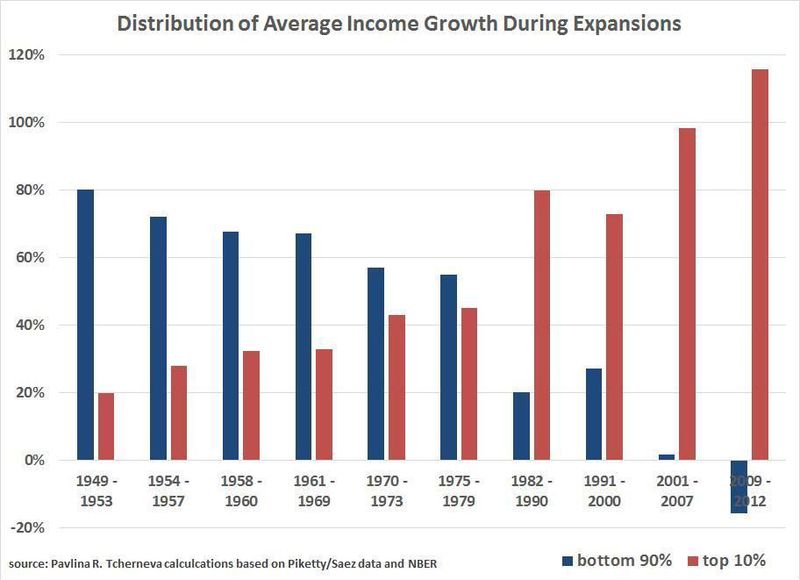 Vox/Matthew Yglesias labeled it “The most important chart about the American economy you’ll see this year.”

Scott Winship at Fortune came back at it on methodological grounds, with the headline “No, the Rich Are Not Taking All of the Economic Pie (In 8 Charts).” He ends up with what he calls the “money chart,” supporting his headline:

Yglesias responded, and Winship responded to him.

The basic contention at this point: who is actually “explaining” the situation?

Do Scott’s corrections explain the situation better? Do they paint a 1. more accurate, and/or 2. more complete picture? By those two standards, is he more honestly and fully informative? Let’s run through his changes.

1. The household method as opposed to tax-unit method is at least a useful additional measure, and is arguably more accurate and explanatory. It’s also less complete because the data only goes back to ’79. But he completes it with Tcherneva’s (by this standard less-accurate) earlier data. It’s a useful addition to understanding, but with little change in the story it tells.

2. The full-business-cycle approach (as opposed to just showing expansions) is also arguably more accurate hence informative. But it (necessarily?) ignores the post-2007 period because the current business cycle isn’t over yet. By Tcherneva’s measure this period is far and away the most egregious demonstration of the inequality trend we’re examining. Scott could have included recent years, with visual and verbal caveats explaining that the cycle is not complete, so the measure that period is not directly comparable. It has less explanatory power, but that doesn’t mean it has none. Omitting the very period that by Tcherneva’s measure are the “money proof” of the trend (and so omitting explanations of that period) arguably explains less about that trend.

3. Looking at the non-elderly population is arguably more accurate and is at least quite informative. It paints roughly the same picture, though less extreme.

4. Post-tax-and-transfer measures are arguably more accurate and informative, but again with the completeness problem. And he should explain that the pre-’79 picture would look quite different if it displayed post-T&T data; the bottom 90% would have been getting more of the pie, which would make the inequality trend look more pronounced than it does in his graph.

I do wish he’d shown a graph as he suggested, including health/medical benefits in T&T (assigning a value other than $0), while explaining the methodological difficulties he points to. I have no idea how or how much this would change the picture.

5. Omitting capital gains (because they’re hard to measure) for the final “money chart” — suggesting that it’s the most accurate, complete, informative, and definitive chart — is a massive hit to accuracy and explanation. Cap gains are the very vehicle, the primary means, by which the increasing inequality we’re trying to understand is realized. “The data might not be accurate” begs the question: Is ignoring that data more accurate? To use Scott’s own words, “assigning a value of $0 is surely not right.”

So some of Scott’s corrections help to usefully and informatively explain the situation better, or at least more. But to summarize the changes that are less informative or downright misinformative:

• The blatant inaccuracy of ignoring cap gains in #5. It completely misrepresents the situation.

• The omission of recent years in #2 — the very years where the trend is arguably most apparent and egregious. Hiding the elephant under the rug?

With these combined, I hope Scott can understand why many see his post as an effort to pooh-pooh and obfuscate the whole subject — the very antithesis of “explaining.”

Part of that hand-waving, obfuscation, and general chaff-dispersal is the proleptic “but of course you’re right” rhetorical ploy, right up front in Scott’s second paragraph:

Let’s stipulate that income inequality is at staggering levels in the U.S., and that income concentration at the top has probably risen (probably)

One really must ask: if income inequality is at “staggering” levels, how did it get there…if it hasn’t risen?

How do you square that staggering stipulated reality with Scott’s headline assertion: that “the Rich Are Not Taking All of the Economic Pie.”

I can’t see how to draw any other conclusion from this direct self-contradiction: he’s talking out of both sides of his mouth. I’ll leave it to my gentle readers to decide why.

Takeaway: obfuscation is the opposite of explanation.

Update: Scott has taken issue with my only-barely-implicit imputation of his motives. He’s right on that. I both regret that and apologize for it. I still think the import of his post (especially the “money chart” and title) — that inequality’s not that bad and not that important — contradicts his “staggering” stipulation, and is rhetorically pernicious. But that’s not the same as bad faith. I withdraw and apologize for any suggestion of the latter.