Greg Mankiw posted about his version of the Taylor rule. He basically sees the Fed rate heading into positive territory, which would indicate that the Fed rate should start rising according to the rule. However, he also sees the need to allow the Fed rate to now stay below a rule rate in order to make up for the time when the Fed rate could not go negative. He attributes low inflation to the Fed rate being too high over the rule rate for too long causing inflation expectations to drop.

Low inflation is rather due to falling labor share globally and to the Fed rate being stuck on the ZLB (the Fisher Effect). But first I want to look at his equation. (link to paper with original version of equation, page 42. Link to newer version.)

There are problems with his equation. 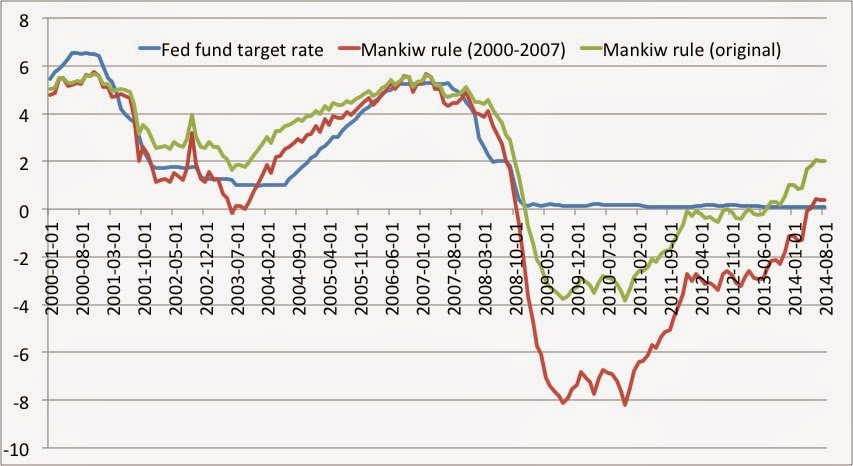 “The amount of slack in the economy is essentially a measure of the quantity of unemployed resources. It represents the quantity of labor and capital that could be employed productively, but isn’t; instead, it is idle.”

My Effective Demand rule followed his 2000-2007 version (red maroon line) very closely from 2002 until the crisis, whereupon they diverged, because the coefficients of his rule conformed themselves to the pre-crisis potential GDP. And potential GDP after the crisis is going through lots of downward revisions which my rule saw immediately as labor share dropped. My ED rule does not conform itself to data statistically, because it just measures capacity utilization and unemployment against an effective labor share (assuming constants after the crisis of a natural real interest rate of 1.9% and an inflation target of 2%.)

The ED rule has only one coefficient that can be changed statistically like the Taylor rule and its various versions. The coefficient is how much the Fed rate would change if inflation was off target. I say 1.3x in line with the view of Glenn Rudebusch. However, as long as you have a determination for capacity utilization, unemployment, a natural real rate, inflation, an inflation target and an effective labor share, you can use the ED rule to determine the base nominal rate of any central bank, for example the Fed rate.

All that being said, there is a bigger question involving why there is low inflation, if in fact the Fed rate has been too low since 2001, not too high, as the ED rule states. The reason is two-fold…

So the low Fed rate is not helping inflation rise because labor share has continued to fall since the crisis. The Fed rate does not increase labor share. Global economic dynamics are pushing labor share down. Rates at many central banks are trying to raise inflation, but they can’t. Firms around the world are holding down real wages to compete. Low inflation is not the result of nominal rates from central banks that have been too high, but the result of firms holding down effective demand with lower real wages.

Bottom line: The low Fed rate will increasingly cause financial instability as the economy tries to surpass the natural effective demand limit upon output. Asset prices will accumulate the liquidity from a low Fed rate, while labor’s share is held down. This process of instability has been building for a few months and will continue into 2015.

According to the Fed yesterday, we will not see a rise in the effective Fed rate. So now we watch for signs of increasing financial instability, instead of sustainable economic prosperity for global societies.