A catch to Andrew Gelman for correcting an attempted but inaccurate catch by Alfred Moore, Joseph Parent and Joseph Uscinski, who thought they had caught Paul Krugman in an error on the always-fun topic of conspiracy theories. Not so!

I cut and paste from Gelman

More particularly, Moore et al. criticize liberal pundit Paul Krugman for writing, “Unlike the crazy conspiracy theories of the left — which do exist, but are supported only by a tiny fringe — the crazy conspiracy theories of the right are supported by important people: powerful politicians, television personalities with large audiences.” They respond, “Krugman is mostly wrong that nuttiness is found mainly among conservatives.” But that’s not what Krugman wrote!

This shows, among other things, the power of Krugman derangement syndrome — people often right that his claim is refuted because of a fact noted in the criticized post. I think there is a simple solution to the Moore et al etc problem. I think there should be an editorial rule that if one criticizes another for exaggerating (say Al Gore inventing the internet) oversimplifying or omitting inconvenient facts, then one is not allowed to paraphrase. If Moore et al had been required to use only direct quotes of Krugman, their elision of his statement of exactly the fact which they claim contradicted his statement would have been obvious.

Would we run out of pixels ? I think the rule should be cut and paste and if you insist elide but don’t ever paraphrase when criticizing. This is now the editorial policy of this blog (catch me in comments and you will get the fame that comes when your comment is pulled back to the main window of a 50 hits a day blog). I also wrote a comment which notes that we will obtain objectivity no sooner than nirvana, immortality and a pony. My comment. Excellent post. I noticed something funny — the figure from Kahan Peters et al (2012) doesn’t illustrate your point well at all. You write “the research of Dan Kahan finding that roughly equal proportions of political liberals and conservatives in the United States engaged in irrational or “motivated” reasoning” but there is no evidence related to that issue in the figure. 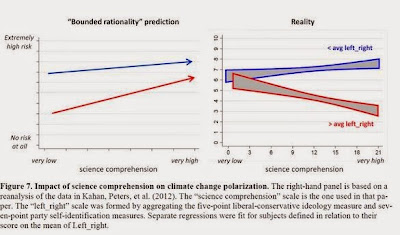 In fact, the data for liberals happens to correspond exactly to the arbitrary hand drawn illustration of unmotivated reasoning with bounded rationality. Now I do not think that Kahan et al provide any evidence that liberals do not engage in motivated reasoning or even that liberals engage in it less than conservatives. The figure illustrates the prejudice of the person who made it based on Kahan et al 2012 [note in the comment over there I mistakenly asserted that the figure is in the published article — I don’t know who made it] prejudices (I guess based on it that he or she is a liberal who thinks that Climate change is a big risk). My point (if any) is that one can’t tell if reasoning is motivated without knowing the consequences of unmotivated reasoning.

As far as I can imagine, we could only tell how vulnerable someone is to motivated reasoning if we were capable of perfect objectivity. Teh figure could be explained if a hypothetical perfectly objective and well informed agent would answer 8 and liberals are completely immune to ideological reasoning, and equally well explained if that hypothetical agent would say 3 and conservatives were completely immune to ideological reasoning. Until we achieve perfect rationality ourselves, we can’t measure the irrationality of others. That is, I think your claim couldn’t possibly be have been demonstrated scientifically given data available in 2014 AD or 1002014 AD. I had some more pointless text here &ran out of allowed characters exactly when I tried to type “conservatives were completely immune to ideological reasoning.” I figured it out (& can explain with my 90 left) but irrationally guessed ideological typos or bugs or something.