I’m rather devastated to find (thanks to Tom Brown at Pragmatic Capitalism!) a discussion I missed at Winterspeak’s place from mid-December, with some of my favorite commenters going after the underconsumption argument that I’ve been going on about.

It starts by citing Mark Sadowski’s comment from Interfluidity “clarifying the difference between wealth and income.”

I found that rather puzzling at first because the first-blush, obvious difference between the two is that one’s a flow and one’s a stock. Duh. But I figured out that he’s actually distinguishing between income and capital gains, making the well-known point that in the language of national accounts, capital gains aren’t income.

1. I think JKH would say that this is all as it must be — that it’s conceptually incoherent to think of capital gains as income. I understand why he would say that. But I’d like to push back on that.

Imagine a company in two counterfactuals — a simplified, stylized representation.

Scenario A: All earnings/profits are paid to shareholders as dividends every year. Book value remains unchanged.

Scenario B: All earnings are retained. Book value increases 1:1 with earnings.

Now: a shareholder holds shares for thirty years, then sells at book value. (Assuming the paid-out dividends and the retained earnings are “invested” identically — say in physical cash that earns no interest, to keep things simple.)

Is it conceptually coherent to say that in scenario B, the shareholder had zero income?

Within the linguistic and logical constructs of the national accounts, yes. But in any reasonable economic construct, it’s crazy. The shareholder accrued those earnings every year; they were just “unrealized” via sale. Just because those earnings were tallied up on the corporation’s books, instead of the individual’s (and eventually transferred to the individual’s), can we reasonably say that the shareholder’s share of corporate earnings were not accrued income?

See JW Mason’s comments at Winterspeak for more on this, expressed more authoritatively than I can achieve.

2. Sadowski says “In underconsumption theory recessions and stagnation arise due to inadequate consumer demand relative to the production of new goods and services.”

That may be true. But I would suggest that underconsumption theory is not nearly so standardized — that in fact it’s wildly un(der)theorized. (I do wish [liberal] economists would get on this hobby horse…)

In my bruited notion of underconsumption, stagnation arise[s] due to inadequate consumer demand (“spending”) relative to wealth — which I define somewhat roughly as the total stock of financial assets. (Claims on real assets, or future production, which have a rough equivalence that I won’t discuss further here.*)

It’s a straightforward monetarist(ic) velocity argument, but with “money” defined as “the exchange value embodied in financial assets.” (In this construct, all financial assets embody money, including those things like currency that have traditionally, in the vernacular, been called “money.”) So the “money stock” is the market value of all financial assets, from dollars to deeds (yes, deeds) to CDOs.

Because of declining marginal propensity to spend relative to wealth (which I think no one will contest), increased concentrations of wealth, arithmetically and inexorably, result in lower money velocity, ceteris paribus.

I posted two graphics to demonstrate this velocity/stagnation situation over the decades. (You can argue with the specific economic measures used here, but they’re reasonably representative of the big picture.)

Personal Consumption Expenditures as a percent of Household Financial Assets: Now these are showing ratios, and it’s possible that an increased denominator (assets) is where the big secular change occurred: arguably many more of the country’s real assets were financialized/monetized/capitalized over the decades shown. (Think: student loans monetizing/present-value-capitalizing those student’s human capital and future earnings.)

But if we’re just surmising, we can say it’s equally possible that the declines here are numerator-driven — resulting from declining spending out of wealth due to wildly increased wealth and income concentrations. I’d expect that both are true.

Somewhat as an aside, I also made a straightforward “money-supply” assertion about recessions, again using my preferred definition of “money.” I’ll share it in the concise language that Twitter requires and encourages so admirably:

Every recession since ’60 preceded by decline in infl adj value of HH assets. Two false (?) positives: 02 and 11. 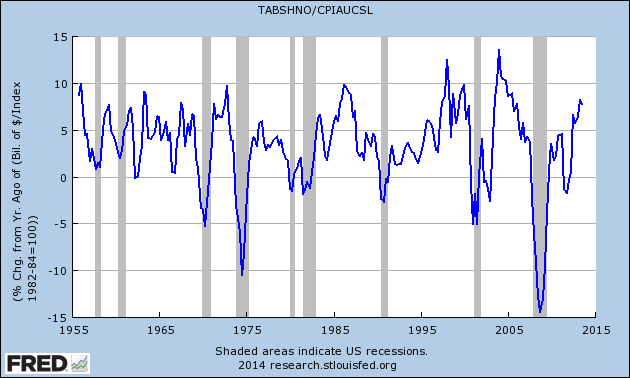 This is getting long so I’ll stop here, with one final assertion:

* I have to toss in one more pet peeve here: financial assets (often called financial “capital”) are not capital! They’re claims on capital. And contrary to much sloppy and often implicit thinking and discussion that you see out there from professionals and amateurs alike, they’re not an “input to production.”