Some years ago Paul Krugman gave perhaps the best argument against the inequality-causes-underconsumption theory of secular stagnation: the idea that rich people spend less of their income/wealth, so if wealth/income is more concentrated there’s less spending and less GDP/prosperity.

(It’s curious how liberal economists are the ones who most commonly shoot down this argument. That’s the subject of my next post.)

There are two parts to Krugman’s argument: theoretical and empirical. I find both to be weak or fatally flawed. Theory first:

at any given point in time the rich have much higher savings rates than the poor. Since Milton Friedman, however, we’ve know that this fact is to an important degree a sort of statistical illusion. Consumer spending tends to reflect expected income over an extended period. If you take a sample of people with high incomes, you will disproportionally include people who are having an especially good year, and will therefore be saving a lot; correspondingly, a sample of people with low incomes will include many having a particularly bad year, and hence living off savings. So the cross-sectional evidence on saving doesn’t tell you that a sustained higher concentration of incomes at the top will lead to higher savings; it really tells you nothing at all about what will happen.

2. That construct requires fairly strong belief in a fairly strong form of Friedman’s “lifetime income hypothesis,” a hypothesis that has been cogently challenged on many grounds. Since this weakens the value of the theoretical construct, it weakens the “we don’t know” assertion that arises from that construct. We might actually have a pretty good idea, looked at certain ways.

3. Further weakening: It relies on saving as an indirect measure of people’s spending (consumption spending is what we’re asking about here), rather than looking at spending directly. And it doesn’t consider people’s spending relative to their wealth — arguably a much more revealing measure if we’re considering “rich people’s spending.” The saving/spending nexus in national accounting is a very sticky wicket, combining changes in income, borrowing, lending, home values, imputed rent, and capital gains in often unintuitive and confusing ways. If we’re asking a question about spending, it’s usually best to look at spending directly, and that relative to wealth, not income (due to the very statistical problems that Krugman highlights).

In any case, Krugman throws his theoretical hands up, and resorts to empirics:

So you turn to the data. We all know that personal saving dropped as inequality rose; but maybe the rich were in effect having corporations save on their behalf. So look at overall private saving as a share of GDP: 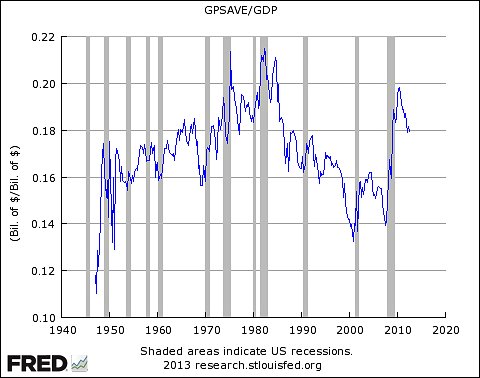 The trend before the crisis was down, not up — and that surge with the crisis clearly wasn’t driven by a surge in inequality.

I find all sorts of problems with this:

1. This graph looks at gross private saving, which includes the financial sector. As Krugman has himself made clear, “saving” by the financial sector is a qualitatively different animal from real-sector saving. It’s huge, it changes a lot over time, and those changes are impossible to parse out by eye looking at this graph.

2. Even if you look at real-sector only (households and nonfinancial businesses), “saving” is heavily influenced by lending/borrowing/payoff trends. It’s a complicated measure to use to discern spending as a percent of assets or net worth or wealth.

Just to emphasize how problematic “saving” is as a measure to evaluate this spending question, consider how important “imputed income” is in the BEA measure of Personal Saving. By far the biggest portion comes from imputed rent, which is itself closely tied to property values hence unrealized capital gains (from heavily leveraged investments), at least in the medium to long run. This even though capital gains are not, according to most national accounting usage, “income.”

You would think that this measure would be straightforward (Income minus Expenditures), but it decidedly isn’t. Take a look: Yesterday I posted this graph as potentially giving us better insight into the question at hand — Personal Consumption Expenditures as a percent of Household Financial Assets: Update: This is all nonfinancial business.

It’s a remarkably similar picture — at least regarding the long-term trend since the 80s.

So there’s some empirics giving some support for what Krugman calls the underconsumption story. (Bad name for it, in my opinion.)

Now how about some of our leading liberal economists delivering on the theory?