Even though this post by Spencer England is from 2008 and hence dated, it reminds us of the overall experience of making it in America:

Making comparisons over time of how real income grows is a difficult proposition with many data problems. One recent study was able to show how a current family’s income when they were in their thirties compared to the income of the same individuals parents when the parents were in their thirties. This type of intergenerational income comparisons is very unusual and can be used to show how much of income mobility is due to family or inherited factors and how much of mobility is due to general mobility in the economy. The findings of this study were generally in line with other studies that show family is a very important factor in driving income mobility and that in general economic mobility does not appear to have changed much in recent years. 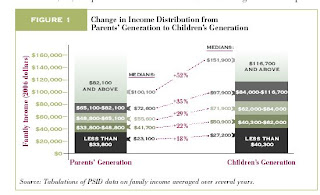 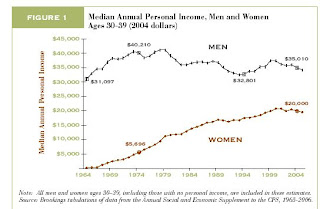 This trend of flat male incomes and rising female income has combined with a major shift in female employment. When you combine this with the major shift in the share of wives working it becomes obvious that a major driving force behind the growth in family income shown in the first chart has been the growth in two income families. 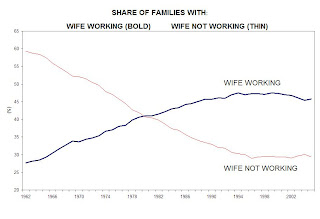 The fundamental question is why has it become much more difficult for a current family to achieve rising family incomes then it was for the previous generation. Obviously, the dominant long term factor driving this trend is the sharp slowing of productivity growth since the 1970s.
Even though productivity growth rebounded in the 1990s, the long term trend is still much lower then it was in the 1950 to 1980 era. 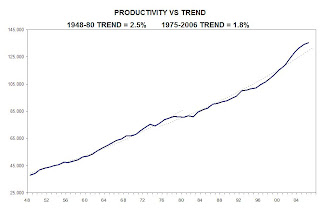 But the overall slowdown in the growth of family income has been significant, from a trend growth rate of 2.3% to a trend of 1.3%. If the old trend had continued real family income would now be 50% higher. 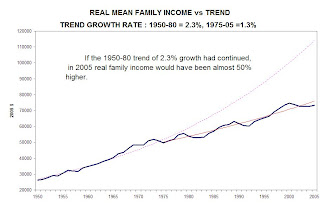 The other point that the chart demonstrates is that the growth in real family income has become much more cyclical in recent times. In the 1950-75 era, cyclical weakness in real income growth was minor and quickly reversed. But since 1975 the cyclical weakness in family income has been much more severe and prolonged. Moreover, the pronounced change in the cyclical pattern raises questions that the weaker trend since the late 1970s may be due to other factors on top on weak productivity–for example higher oil prices and a general deterioration in the US terms of trade.