Paul Krugman points to Angry Bear Kenneth Thomas in this piece in the New York Times on the use of Ireland as somehow a success story of what are failed policies regarding employment:

Ireland Is The Success Story Of The Future, And Always Will Be

Via Mark Thoma, Kenneth Thomas analyzes the latest attempt to claim that Ireland is a success story — is this the third or the fourth time around? — and concludes that the modest fall in unemployment is all about emigration. Actually, we can reach the same conclusion by going straight to employment data: 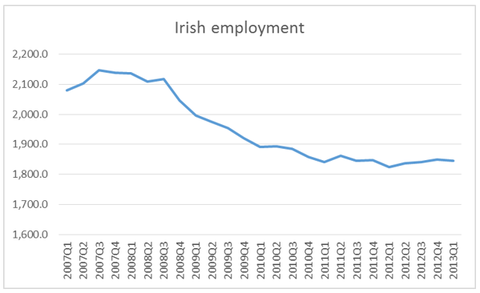 The one sense in which Ireland has made some progress is that it has somewhat reassured bond investors that its population will continue to sullenly acquiesce in austerity; as a result, Irish 10-year rates, while still at a large premium, are now 60-80 basis points below those of Italy and Spain.

But the repeated invocation of Ireland as a role model has gotten to be a sick joke.