The Standard Deviation of NGDP Growth During the Great Inflation

Once again I have to thank Mark Sadowski for goading me into digging deeper, staring longer, and thinking harder about this topic than I otherwise would have.  In comments to Part 3,  Mark informs us that:

Let’s have a look.  Graph 1 is a scattergram of 12 Qtr average NGDP growth from this FRED page, measured as Compounded Annual Rate of Change [CARC] vs Std Dev for the years 1954 through 1978.  A linear trend line is included. 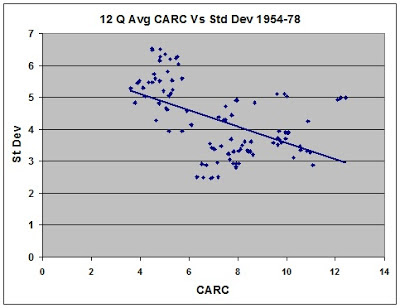 At first glance it appears that Mark is right.  But there is something strange about that data distribution.  Do you see it?

Let’s look back to one of my earlier graphs showing the change in Std Dev over time for a moving 13 quarter kernel.  I see a broad sweep up in St Dev from the mid 60’s to the early 80’s.  Can a 12 Q kernel be very different?  No, it can’t, as Graph 2 indicates. 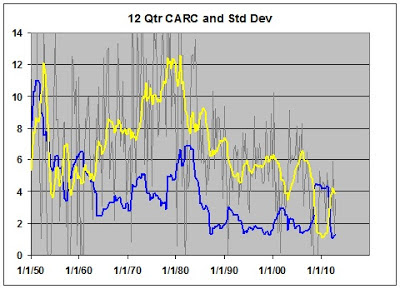 Twelve Qtr average CARC is in yellow, St Dev in blue.  The basic CARC data is in grey.  What we observe are 5 different realms, with Average CARC and Std Dev moving broadly together: a sharp up and down from ’50 to the early 60’s; up from ’64 to ’81; down ’82 to 87; flatish ’88 (or ’90) to ’08, and then the Great Recession.   How can we have Std Dev negatively correlated with average CARC when they exhibit similar movement?   That’s at the gross level.  The small magnitude undulations, however, are in contrary motion.  This is easiest to see in the wiggles from 1954 to ’60, and again in the great recession, but actually occurs throughout.  It happens mainly because recessions bring CARC values down while boosting the Std Dev.  But — this is not the explanation. 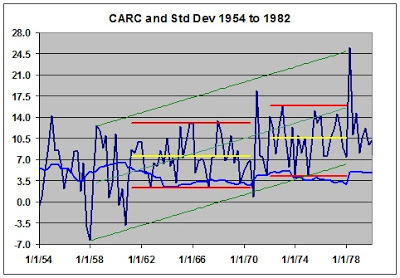 The CARC data from FRED is in dark blue. It moves up over the period, but not in a regular manner.  There are two flatish periods from Q2 ’61 to Q3 ’70, and from Q2 ’72 to Q1 ,78.  Averages for these periods are indicated with yellow horizontal lines.  The data packet spans for the two periods are outlined in red.  Std Dev is in bright blue.  I’ve included a trend channel in green, just because it amuses me.  Data for the two periods is summarized in the table below.

The 60’s were recession free, and in that decade we observe that after Std Dev hits bottom in 1964, it moves in near lock-step with average CARC for the rest of the decade [easiest to see in Graph 2.].  After the 1970 recession, CARC stepped up into a new range.  There was a recession in 1974, yet the data envelope only widened slightly. This is because inflation at the time kept NGDP values high, even in the trough, as this FRED graph illustrates.

Now, lets have another look at the scattergram of average CARC vs Std Dev, this time with the data properly parsed around that significant 1964 date I mentioned earlier, shown in Graph 4. 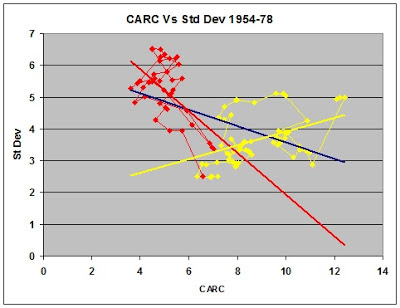 The values from 1954 to Q4 ’63 are in red, and from Q1 ’64 on in yellow.  The original trend line is shown in blue, trend lines for the two sub sets are color coded with their respective data points.

The conclusion is that the apparent negative correlation between CARC and St Dev over the period of 1954 to 1978 is specious, and wholly due to the high multiple-recession-driven Std Dev values of the 50’s.  The Std Dev drop of 1960 to ’64 occurs when the last of these gyrating data points fall out of the moving 12 quarter kernel.

After that, Std Dev is positively correlated with CARC, as I claimed in the first place

There’s a lot more to dig into here, and I’ll do that in a follow-up post.